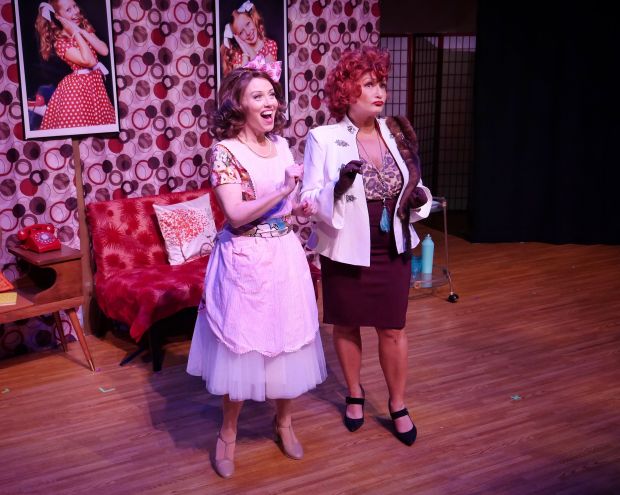 BOSTON – It was comic chaos uncorked.

The Theater Uncorked production of “Ruthless! The Musical” that ended Sunday at the Calderwood Pavilion of the Boston Center for the Arts was an absolute hoot.

The all-female cast under the direction of Russell R. Greene has a ball in this campy tribute to  musicals such as “Gypsy” and classic movies such as “The Bad Seed” and “All About Eve,” with book and lyrics by Joel Paley and music by Marvin Laird. It won  the 1993 New York Outer Critics Circle Award for Best Off-Broadway Musical.

Mom Judy Denmark (a wonderful Rene Bergeron) is a typical 1950s Stepford Wife-type housewife whose husband Frank has – now that you mention it – been away for quite a while now.

Fiona Simeqi, a talented young woman who has become a mainstay on local stages along with her sister Marissa, is Tina Denmark, Judy’s  8-year-old wunderkind daughter who’ll do anything – and we do mean anything – to win the lead role in the school play, directed by a tippling, frustrated Grade 3 teacher named Miss Thorn (Sarah Sinclair), one of  many eclectic characters who populate Paley’s and Laird’s world. 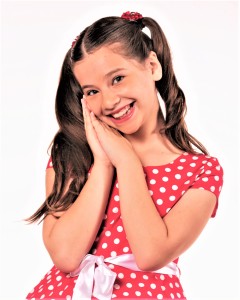 Theater Uncorked has been building slowly and steadily in its second campaign under the leadership of award-winning actress Shana Dirik, the producing artistic director, who got her troupe’s feet wet with a  couple of one-offs before beginning limited runs of fully-staged shows, including  last April’s well-reviewed production of A.R. Gurney’s “Sylvia.”

Dirik has been known to chew the scenery, especially when allowed to go gloriously over the top as she does here in the role of Sylvia St. Croix, a mysterious but somewhat sleazy  agent who has – as do many of the characters – a bagful of secrets that spill out along the way. She promises to make Tina a star but is momentarily stymied by Miss Thorn’s decision to cast the connected but untalented Louise Lerman (Lydian DeVere Yard) instead. An “accident” involving a jump rope elevates understudy Tina to the key role of Pippi Longstocking in “Pippi in Tahiti” and stardom quickly follows.

Susan Wentworth Austin is Lita Encore, the sharp-tongued drama critic who ‘hates musicals” and also happens to be Judy Denmark’s adoptive mother and the grandmother of Tina Denmark.    Her scathing review of a show allegedly caused the celebrated actress Ruth DeMarco to commit suicide.

Judy eventually turns in Tina and she is sent off to the Daisy Clover reform school for psychopathic ingenues. Lita lets Judy know that her actual birth mother was a star, and it is in her birthright to become a Broadway star – which she promptly does, aided by Sylvia.

You get the point. Hold on to your hat when the bodies start piling  up.

The score is tuneful enough, and the lyrics are relentlessly clever. You have to listen closely to catch all of the bon mots and probably would have to listen to the score a second or third time to catch them all. Every member of the cast, including the supporting characters performed by Player No. 2 (Allvia Rowe), gets their moment to shine.

Comedy is serious business, especially a show like this one where everyone has to be on the same page or the show can run right off the rails. It requires being serious about the silliness, and the fact that Greene has directed Dirik in the role before surely helped the process along.

“Ruthless!” is black comedy at its blackest, hilarious best, and another step forward for Theater Uncorked as its gains a foothold in the ultra-competitive Greater Boston theater scene. The troupe will try and build on the momentum with a Youth Theater Camp in February and its first “Black Tie Gala Fundraiser” in March.

For more information, go to theateruncorked.com.