BOSTON – If The Son, the middle-aged, unnamed character portrayed by Ken Cheeseman, is certain of only one thing, it is this: He is headed to hell.

He serves as our narrator and events unfold through his eyes in Max Posner’s poignant memory play “The Treasurer.”

The Son, a geologist who lives in Denver with his therapist wife Nora,  doesn’t like sharing his story but there he is, in our faces, prowling up and down the aisles of the intimate Lyric Stage Company of Boston, a restless soul who bicycles everywhere he goes, an activity he describes to us in great detail.

He’s headed to a special section of hell, he believes. That’s because he also believes there is no other spot here on earth or in the hereafter for those who do not love their mother — enough. The Son is both earnest and intense, and agonizes over the fact he feels guilty even as he is comfortable in his own skin as a husband and father.

The Son’s mother, Ida Armstrong (Cheryl McMahon), has lived the good life, at least until her second husband passes away unexpectedly, leaving her with great memories but in dire financial straits.

It would appear that from early in life her every movement has been carefully calculated, from leaving her husband and three sons, one of them just 13,  for Ron Armstrong, a former congressman and editor of an Albany daily  and “the most exciting man in Albany.”

Even her hand-picked choice of an expensive senior citizen residence that she clearly cannot afford speaks to never letting reality interfere with her own personal comfort. Outwardly, she is friendly, outgoing, concerned with her aging pet. 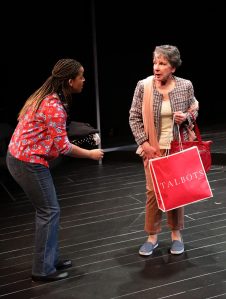 With his mother in financial crisis, Cheeseman’s Son agrees to oversee his mother’s finances with financial support from the other two brothers, and ponders whether the added responsibilities and more frequent contact with his mother will help them to bridge the divide  and bring them closer.

Their relationship, until its final moments, unfolds along a series of phone calls, made as The Son pores through records on his phone or a PC, calls that show there is much more that separates he and his mother than just distance.

Robert Najarian and Shanae Burch are charged with inhabiting all of the other characters, including brothers Jeremy and Allen, as well as pillow salesman Julian and Talbot’s salesperson Ronette. whom Ida takes a liking to.

Problems arise suddenly when Ida glibly agrees to donate $7,000 of her sons’ money to the Albany Symphony.

The erratic and expensive spending, it turns out, is a symptom of another issue: dementia. When the dementia begins to kick in, it is like a slowly setting sun, with Ida struggling to remember important phone numbers, and starting to make calls to bewildered strangers and forgetting where she is.

Director Rebecca Bradshaw has gotten the casting right, and everything else seems to have fallen into place after that. She has seen to it that Cheeseman stays true to the rhythms of the character he established in his opening monologue and McMahon, who seems to be getting better with age, is able to convincingly portray the ravages of dementia.

We all have family. And with family comes family issues, often with disconnect and anger. And Posner, with his portrayal of a fractured relationship which cannot be mended, reminds us that bridging a gap and forgiving the unforgivable may be more than we mere human beings can manage.  In an interview, Posner said he based his play on the relationship between his father and his grandmother.

Over the final 20 minutes of the 95-minute piece, Posner overstates the point he’s already made and concocts an ending not grounded in any reality. If the ending isn’t satisfying, it would hardly be a crime for a playwright full of talent and promise who is still very young.

Posner also believes his story may provide relief for some, as he claimed in an interview. “My hope is that the play provides some kind of comfort or usefulness in realizing that many of us are privately struggling with similar unpleasant, horrible, and normal feelings. “

As technology advances, smartphones and PCs conspire to put more space and distance between us.   Perhaps it has never been more important to reach out and touch someone, lest when push comes to shove – as it did with The Son and Ida — we have nothing to say.