The ensemble in a scene from the North Shore Music Theatre’s production of “Guys and Dolls.” Photo: Paul Lyden

BEVERLY — “Guys and Dolls” is an “old-school” musical, and that’s meant in the best possible way.

The current production at the North Shore Music Theatre is most appealing, and that’s because all of the essential elements of an old-school musical: a tuneful score, well performed, that will have you humming the tunes on your way out the door; sterling production numbers; and a happy ending with everything tied up in one neat bow in a rousing production number.

Forget the storm, the elections and those aggravating ads and lose yourself in Damon Runyon’s guys and dolls, cartoon characters with wonderfully descriptive names such as Harry the Horse and Angie the Ox. It’s pure escapism, and who doesn’t need that from time to time?

Yes, the book by Abe Burrows and Jo Swerling is a bit corny and musty, but the characters are timeless and there are plenty of one-liners with staying power. There’s nothing musty or dated about the nonpareil score by Frank Leosser, which contains the title tune, the engaging and melodic ode to horse-racing “Fugue for Tinhorns,” “Luck be a Lady,” “I’ve Never Been in Love Before,” “I’ll Know” and “Sue Me.”

None of the guys in “guys and Dolls” are on the level, and that includes Nathan Detroit (Jonathan Hammond), the fast-talking proprietor of the world’s oldest established permanent floating crap game, much to the disgust of his long-suffering fiancee showgirl of 14 years, Miss Adelaide (Mylinda Hull).

He is always promising to drop the game and marry Adelaide, but guys like Harry the Horse keep bugging him to find a home for the crap game when the heat comes down from Lt. Brannigan (Michael Scott).

Hull plays the perpetually-put upon Adelaide with humor and heart and the requisite nasally naievete. She and her fellow Hot Box dancers are a bright spot throughout.

The role of missionary Sarah Brown, who finds herself the unlikely object of affection by a gambler named Sky Masterson is a thankless one — it’s not that easy to play a role when you have to stay buttoned up, prim and proper, for almost the entire show. Kelly McCormick as Sarah does get a chance to let her hair down in “Havana” production number, a a first-act highlight.

Kevin Vortmann is a suave, cool Sky Masterson, with great pipes and strong chemistry with McCormick, none moreso when he romances her in “Havana” and in their duet in “I’ve Never Been in Love Before.” 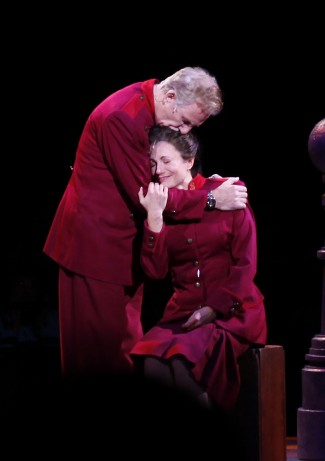 Jamie Ross and Kelly McCormick in a scene from “Guys and Dolls” at the North Shore Music Theatre. Photo: Paul Lyden.

The principals get solid support from old pro Jamie Ross as missionary Arvide Abernathy — he does a touching job serenading Sarah on her relationship with Sky in “More I Cannot Wish You” and Wayne Pretlow as Nicely-Nicely Johnson, who leads an energetic ensemble in “Sit Down, You’re Rocking the Boat,” one of choreographer Michael Litchfield’s several rousing production numbers.

When you’re doing a show in the round costumes have to be loud and proud, and they certainly are, courtesy of costume coordinator Paula Peasley-Ninestein. Take the day-glo yellow of the raincoat of Scott as Lt. Brannigan, shades of the movie “Dick Tracy,” if you remember it.

Erik Diaz creates a mini-Times Square with marquees and signs of other landmarks.

The excellent sound design by Michael Eisenberg and the proper balance between orchestra and vocals are both NSMT trademarks, and music director Craig Barna and an orchestra were en pointe Wednesday night.

Again, it all gets sorted out and tied up in a neat bow at the end and sends the audience out happy. Escape the political ads and the storm news and be royally entertained.