BOSTON — Christie Brinkley has been perhaps the most successful model in history. She came late to musical theater, and gets points for courage for even taking on the role of Roxie Hart, the murderess turned media darling in the musical “Chicago.”

She performed the role on Broadway and in London’s West End, and reprised the role in the national touring production of “Chicago” that was at the Citi Wang Performing Arts Center from Nov. 1-4. 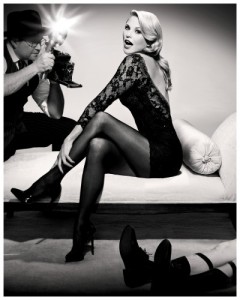 The bad news is her singing voice was tentative and tight — a kind of breathless monotone — and her acting just as strained and tight. Ann Reinking’s choreography in the style of Bob Fosse. Here replicated Gary Chryst, is intricate and athletic and taxes even the youngest, most skilled dancers, and at 58 Brinkley just isn’t up to the task.

That’s too bad because the production was otherwise first-rate Amra-Faye Wright is just fine as Velma Kelly. There were times she peeked over to see if Brinkley was keeping up in their dance duet in “Nowadays”; at times Wright appeared to be trying to dance with one hand tied behind her back. Having seen the show more than a half-dozen times, it appears the choreography had been modified for Brinkley and she still had trouble keeping up.

Former “Seinfeld” and “Family Feud” star John O’Hurley appears to be barely lifting a finger while doing everything right as Billy Flynn, the lawyer who isn’t in it for the money — “all he cares about is love.”

playing the puppet to O’Hurley as her puppeteer as they dazzle the media with their version of events in the murder Roxie was alleged to have committed in “We Both Reached for the Gun.”

The Kander-Ebb score sounds just as good as the first time I encountered it at the Colonial Theatre many years ago in its original production: “All That Jazz,” “Razzle Dazzle,” “When You‘re Good to Mama” and “Nowadays,” to name just four.

The supporting cast is fine, with Ron Orbach as Roxie’s befuddled husband Amos, , Kecia Lewis-Evans as the Matron “Mama” Morton, and D. Micciche as Mary Sunshine.

Lenny Daniel does a standout job as member of Roxie’s jury mugging and reacting to what’s going on.

“Chicago” is still a great city and a great show, but Roxie Hart is a bridge too far for Brinkley.