STONEHAM — It’s tricky business when you adopt an iconic movie for the stage.

The source material of the Stoneham Theatre’s adaptation of Frank Capra’s classic holiday film “It’s A Wonderful Life” is pretty much bulletproof, but those entering the theater also pretty much have it in their brain what such a stage production should look, feel and smell like. 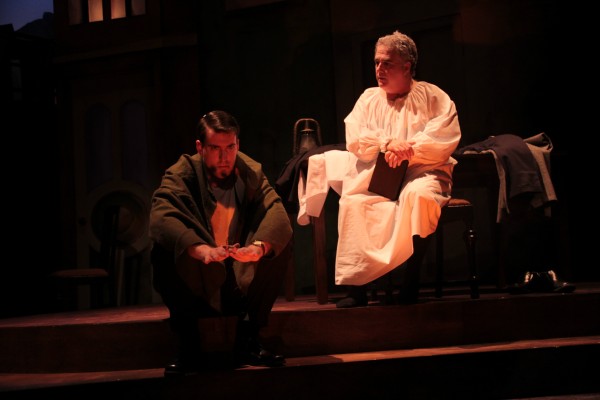 Mark Linehan and William Gardiner in a scene from the Ston eham Theatre’s “It’s a Wonderful Life.” Photo: David Costa

When Hollywood adapts a stage play for film, the director can “open up” the piece, without the limits of the proscenium stage, to include a larger numbers of actors, access to outdoor locations, etc.

The opposite happens when a movie becomes a stage play. Scenes that cannot be recreated due to the limits of a theater have to be suggested, in this case a brother saving his younger brother’s life after he falls through ice, or a pool opening beneath a high school dance floor. The number of actors in a scene is also necessarily limited on the stage.

Those limits lessen the dramatic impact of some scenes in Weylin Symes’ adaptation of “It’s a Wonderful Life” for the stage, especially when the residents of Bedford Falls make a run on the Bailey Building and Loan Association or the final climactic scene when those same residents band together in George Bailey’s living room to save his bacon.

As it is, both the film and this adaptation are slow to begin, setting the stage through a series of events for what George Bailey has meant to Bedford Falls over many years.

Still, Mark Linehan early on conveys the goofy charm, earnestness and ambition of a young George Bailey and is later convincing in his dramatic turnaround. He even bears a physical resemblance to a young Jimmy Stewart, which shouldn’t matter but does, given the audience’s preconceived notions about the piece.

Erin Brehm is very likeable as the coquettish Mary Hatch, eventually to become Mary Bailey, the loving mother and wife.

Director Caitlin Lowans has made some other very good decisions in casting, including the redoubtable Bobbie Steinbach in the dual roles of a warm Mrs. Bailey and the black-hearted scheming Potter, in this case showing that’s it’s entirely possible for a woman to be just as villainous as a man.

There’s other fine support from Gerard Slattery as the well-intentioned but hapless Uncle Billy, William Gardiner as the kind-hearted angel Clarence, and Michael Underhill as George’s younger brother Harry.

At an early performance, the children in the production were still finding their way in their roles; they’ll doubtless be more confident as the run goes along and projecting at a level so that some lines won’t be lost.

Jenna McFarland Lord has crafted a clever set, with much of the action in the foreground and the iconic Bedford Falls bridge in the background.

There’s some strong sound design by David Wilson; especially effective are the voices calling out in prayer to help George in his time of need.

Stoneham’s “It’s a Wonderful Life” may lack the scope and grandeur of the movie, but it has its own intimate charms and an ending designed to warm the cockles of even Potter’s stony heart.