Bab Habit serves up a parade of presidents

BOSTON — It’s the presidential season, and I’ll wager by the time the campaign ended this week you knew more than you needed to know about President Obama and Mitt Romney.

But how much do you know about the 43 other men who have held the seat?

Bab Habit Productions take a creative, colorful romp through the ranks of our chief executives in its production of “44 Plays, 44 Presidents” in the Doane Rehearsal Hall of the Calderwood Pavilion at the Boston Center for the Arts through Sunday, Nov. 11. 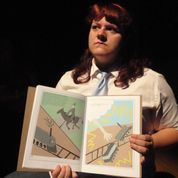 Britt Mitchell in “44 Plays for 44 Presidents.”

An energetic ensemble of Morgan Bernhard, Brenna FitzGerald, Britt Mitchell, Will Moore and Brooks Reeves take turns passing around a jacket that symbolizes the presidency, and they sum up a president’s tenure in a brief skit or song, or using simple props or video.

Director Jeffrey Mosser has his charges moving at a breakneck pace around the intimate Doane Hall space.

Don’t worry about the “44 plays.” They accomplish it all in about two hours, spending a few moments with each president, obviously a bit more with the major players.

You’ll also likely pick up information you didn’t know about our 44 chief executives and emerge feeling a little better about a bitter, bruising campaign and a political scene that often resembles tackle football.

The piece was originally produced in 2002 by Chicago’s Neo-Futurists and this year Bad Habit is one of several troupes around the country performing the piece as part of the Plays for Presidents Festival.

Some of the funniest bits are about the more obscure and nefarious presidents — they took the time and trouble to document that Warren G. Harding was probably the worst president in history

They did tend to linger longer on those presidents carved on the side of Mount Rushmore, but they were pretty even-handed in their treatment of presidents on both the left and the right, recognizing that while Nixon did leave his office in disgrace, he was the president who founded the EPA and opened the door the door to China.

One of the most effective pieces was about JFK, with the ensemble sitting down to watch a video of people describing where they were and what they were doing when JFK was shot.

There was Ronald Reagan (a former stand-up comic — look it up) trying to explain his way out of the Iran-Contra affair, and Jimmy Carter, recognizing that while he might not have been a great president, he became more celebrated for his work after he became president.

The bits were hit-and-miss, but they come at you so fast and furious that if you didn’t like this president, you’re bound to like the next one.

There are other fun things to make the experience even better; you could win a presidential commemorative coin (aka a penny) by answering presidential trivia questions before the show or jump up on stage later to be a “guest president.”

One high point was FitzGerald playing Obama as a double-dutch jump roper, meant showing him trying to overcome a multitude of problems , while telling  the audience “you could be jumping with me.”

Wednesday night, the troupe was prepared with the proper ending no matter who had won Tuesday night’s election. The troupe allowed the audience to vote on which ending they wanted to see, and since they had already seen an Obama bit, it was about Romney. Then came two actors joined as one, taking turns espousing different viewpoints on the same issues, or Romney “flip-flopping.”

Laughter is the best healer, and the audience probably left feeling a little bit better about both the presidential process and their vote, whatever it was.