Desperate men, desperate times in ‘Of Mice and Men’ 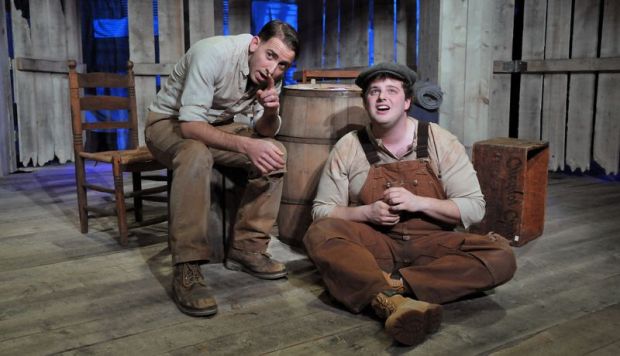 BOSTON — John Steinbeck proved that he had a real feel for the plight of the working man in his masterworks “The Grapes of Wrath” and “Of Mice and Men.”
He wrote of desperate men and women in desperate times, of their yearning for a job and a place to call their own, of trying to find an American Dream that seemed to have vanished during the Great Depression.
Moonbox Productions is now staging Steinbeck’s stage adaptation of “Of Mice and Men” through Dec. 22 at the Plaza Theatre at the Boston Center for the Arts, and it’s a well-acted, engaging production featuring a strong ensemble of local actors.
George (Phil Tayler) and Lenny (Harry McEnerney) are migrant farm hands in the Salinas Valley California in the 1930‘s, pursuing job after job until either the work runs out or circumstances force them to leave — or run for their lives
George has made a vow to watch after Lenny after the death of Lenny’s aunt. Lenny is a simple-minded man-child who doesn‘t know his own strength, and whose love of small animals invariably ends badly for the animal.
He also becomes tongue-tied and flustered around women. McEnerney is a large man with a bit of a baby face, perfect for playing the role, which requires an actor to adopt the mannerisms and speech patterns of a mentally challenged person and keep them consistent throughout the 150-minute length of the production.
It’s an incredibly difficult role that requires great focus and concentration, and McEnerney is up to the task.
George never fails to remind Lenny how easy life would be without him, and how lucky Lenny is to have George watch over him, but George is the first to admit he “ain’t got no people” either and his shepherding of Lenny gives him a sense of purpose.
Tayler’s George is the latest in a series of impressive performances this year, including the title role in Moonbox’s earlier production of “Floyd Collins,” and the Lyric Stage’s record-breaking production of “Avenue Q,” where he also proved to be a skilled puppeteer.
The dream of a small ranch of their own and Lenny’s beloved rabbits is the carrot that George dangles in front of Lenny each day, as they face another long back-breaking day of work
George is determined he won’t end up like the other hands, working just to get a
stake just large enough for him to blow at a whorehouse, barroom or pool hall.
Heartbreaking performance by Ed Peed as Candy, the one-handed old ranch hand who grasps onto Lenny and George’s dream as his last chance to live with dignity.
Calvin Braxton is also excellent as the black ranch hand Crooks, an outcast among outcasts, bitterness that the color of his skin prevents him from even contact that can make life bearable.
Glen Moore as Curley has the proper arrogance and split-second temper and Erica Spyres is trouble with a capital “T” as Curley’s newlywed wife, whose wandering eye and penchant for showing up in the ranch hands’ bunkhouse creates tension between Curley and the hands.
Steven Emanuelson, Tom Shoemaker, Jordan Sobel and Phil Thompson also offer solid support.
Dan Rodriguez’s original music is a nice touch, adding atmosphere with the proper sense of foreboding.
Director Allison Choat has a strong feel for the tone of the material , and the result is a cast that is en pointe in its portrayals.
It will not end well, of course, but in this case, the journey is the story.
Moonbox Productions has made it a point to partner with a non-profit group for each of its productions and for this one has chosen More Than Words, a non-profit that helps youth who are homeless, out of school or involved with the courts to take charge of their lives by becoming involved in a business.
Moonbox Productions’ “Of Mice and Men.” Stage adaptation by John Steinbeck, based on his novel. Directed by Allison Choat. At the Plaza Theatre at the Boston Center for the Arts through Dec. 22. http://www.moonbox.org.