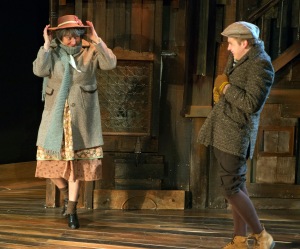 WATERTOWN — As we get older, our memories of holidays tend to get more bittersweet, tempered, perhaps, by the death of a loved one at holiday time.
The New Repertory Theatre’s production of Truman Capote’s “Holiday Memories” is based on two of Capote’s magazine stories — “The Thanksgiving Visitor” and “A Christmas Memory,” both having to do with his relationship as a young boy named Buddy (a stand-in for Capote) with his much older cousin, with whom he lived for much of the time growing up.
Nanny Rumbley Faulk, whom Truman called “Sook,” was actually his aunt, one of three maiden sisters who helped raise Capote along with their bachelor brother.
Born in New Orleans in 1924, Capote had a difficult childhood and was for the most part ignored by his parents. He was often sent to live with family members in Monroeville, Ala; around his sixth birthday, they left him there for good.
Sook, who befriended him, was extremely shy and rarely left the family home, preferring to stay home, cook and clean while others went out to make a living for the family. While she never went to the movies, she gave Buddy dimes so he could see films and report back on them to her.
Russell Vandendrouke’s stage adaptation of the two Capote stories retains the rich descriptions of the rural South that are integral elements of both stories.
In both stories, he also makes use of the character of an adult Truman Capote, who serves as our narrator.
Marc Carver as the adult Truman is a warm, winning guide to the events of the evening, looking back wistfully at the events of his childhood.
In the skilled hands of Adrianne Krstansky, Sook is child-like and flighty, but caring, compassionate and wise.
In “The Thnaksgiving Visitor,“ she tries to free Buddy from the bullying clutches of the aptly-named Odd Henderson, who so torments Buddy that Buddy delights in staying home from school.
Sook Invites Odd to Thnaksgiving dinner in a bid to gain his favor and stop the bullying.
After Buddy’s plot to completely humiliate Odd backfires because of Sook’s lie, she is mad at Buddy and not Odd.
“I can abide anything but deliberate cruelty,” says Sook to a chastened Buddy.
Jesse Hinson and Elizabeth Ann Rimar shine in a myriad of supporting roles, including Hinson Odd Henderson and Rimar as Annabelle Conklin, the object of both Buddy and Odd’s affections at the Thanksgiving dinner.
In “A Christmas Memory,” Capote details Sook’s annual holiday ritual of making fruit cakes for friends, family and U.S. presidents.
“It’s fruitcake weather,” she would cry on a morning in late November.
Then it’s off to tabulate what a year of saving and scrimping had wrought and buy the supplies, and make the terrifying journey into town to buy whiskey for the fruitcakes.
Then there’s the description of the grueling journey over hill and dale take to find the exact right Christmas tree, and the heartbreak of neither one having enough money to give the other one the Christmas gift they wanted to buy
In both pieces, BU sophomore Michael John Ciszewski, clad in knickers and suspenders expertly channels Buddy, full of insecurities as befits a child abandoned by his parents
He describes the private world Sook and Buddy inhabited, and their ability to shut out the others in the household.
“For the most part, we are not aware of them,” says Buddy.
Rather sumptuously staged for such an intimate show, including lovely background projections, with either scenic designer Jon Savage or lighting designer Chris Brusberg getting the credit.
Director Michael Hammond’s sure hand on the helm makes sure proper sentimentality without ever becoming maudlin.
Not all holidays provide great memories, but it’s doubtful that Capote, who died in 1984, ever forgot flying a kite with Sook on that Christmas Day, or the fruitcakes and dimes wrapped in paper she continued to send him long after he had left Alabama for good.
But it’s the actors who make this “Holiday Memories” a series of small pleasures and a warmly-roasted chestnut on the fire.
The New Repertory Theatre production of Truman Capote‘s “Holiday Memories.” Adapted for the stage by Russell Vandenbroucke. Directed by Michael Hammond. At the Mosesian Theatre at the Arsenal Center for the Arts through Dec. 23. http://www.newrep.org.