WATERTOWN — There are many kinds of madness during the holiday season.
One kind is manning the reservations desk at a beyond-upscale Manhattan restaurant close to Christmas, as an actor named Sam does in Becky Mode’s “Fully Committed,” a New Repertory Theatre production in the Black Box Theatre at the Arsenal Center for the Arts. 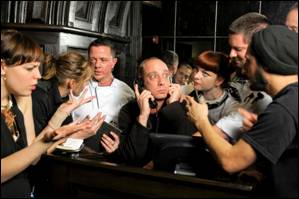 In the malleable hands of a fine actor and gifted mimic such as Gabe Kuttner Sam comes alive, but Kuttner, in an interview in the program, is the first to admit that it takes focus and concentration to make the split-second switches between playing Sam and the 30 different characters he portrays in the 80 minutes of the production.
The phones are ringing off the hook even before Sam enters the small, windowless, cluttered basement office. He soon finds himself juggling VIPs, including a party of 16 hosted by a celebrity who calls for “all-vegan tasting menu” and judging the restaurant’s lighting “too harsh,” requests to bring her own lights to temporarily change the lighting.
Then there are demands of a diva of a chef named Oscar, who comes out sounding like a very excitable Michael Caine, calls from a moody maitre’d named Jean-Claude and a fellow actor, who calls frequently to advise Sam of his good and great fortune and to commiserate with Sam about his lack of same.
Toss in the unexpected visit of a restaurant critic, an emergency in the women’s toilet, and collisions with society doyens and assorted eccentrics and you have a very full plate for Sam.
At one point, he hilariously reads items off the menu of exotic dishes with ever more esoteric descriptions to a future visitor from Milwaukee, who struggles to absorb them.
“Oh, you do have chicken, then,” he says at one point.
Kuttner, as with many actors, has had extensive experience working in the food service industry — the number of jobs being “too many to mention,” which obviously gives him the feel and empathy for what such work entails, especially during the busy holiday season.
Sam is also angling to get out of working both Christmas Eve and Christmas to spend time with his recently-widowed father in South Bend. Talking with Sam’s father is one of several occasions Kuttner  is able to call up his excellent Midwest twang.
Director Bridget Kathleen O’Leary keeps Kuttner on course and focused throughout.
Will Sam’s co-worker Bob, who has screwed up the restaurant critic’s reservation and is now interviewing for another job, ever show up to relieve him?
Will Sam sing “The Lady is a Tramp” for the couple who may be associated with the Mafia?
Will Sam somehow parlay his position into the role he covets on HBO?
“Fully Committed” is the perfect holiday escape — it doesn’t require any heavy lifting by the theater-goer. Just lean back and laugh and leave in a good mood.
The New Repertory Theatre production of “Fully Committed,” by Becky Mode. Directed by Bridget Kathleen Leary. At the Black Box Theatre at the rsenal Center for the Arts through Dec. 30. Newrep.org.

← New Rep brings Capote’s wistful ‘Memories’ to life
Huntington’s ‘Our Town’ is your town, too →