‘Invisible Man’ is a worthy-retelling of a classic 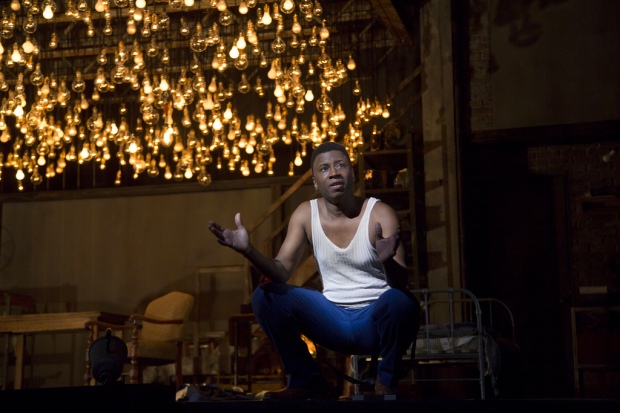 BOSTON — When I scanned my high school summer reading list one summer, a title caught my eye. “Invisible Man.” Ah. Finally, some science fiction.
But it wasn’t the H.G. Wells novella, but the masterwork by Ralph Ellison, a work far more harrowing in its depiction of an idealistic young black man whose dreams are dashed and whose ideals are slowly stripped from him one by one over a two-decade period in the early 20th Century.
“Invisible Man” has been adapted and brought to the stage in a co-production by the Huntington Theatre and the Studio Theatre of Washington, D.C. that will be at the BU Theatre on the Avenue of the Arts through Feb. 3.
Oren Jacoby’s adaptation of the novel to the stage has retained much of the power of Ellison’s work. If there is a problem, it comes from the long narrative stretches when the Invisible Man’s perspective on events that have transpired is vital to us understanding his ultimate decision, and the limits on what Jacoby could include from Ellison’s ethereal prose.
What this adaptation has done very, very well is depict those events with the aid of strong direction of Christopher McElroen and an excellent ensemble cast.
Jacoby’s adaptation has included many important passages, including the opening line: “I am an invisible man.”
The adaptation opens with the Invisible Man (Teagle F. Bougere) in a Harlem basement, where he has taken refuge from the outside world. It just may be the brightest spot in New York City, Bougere informs us, with its 1,369 light bulbs.
He begins his description of the journey that eventually rendered him invisible to others — not in a physical sense — and brought him to the basement. He tells us that as a youth living in the South, he was an optimistic, idealistic high achiever, in the style of Booker T. Washington, a gifted speaker espousing humility by members of the Negro race, even in the face of overwhelming oppression and racism.
He is invited to give a speech to a group of local white community leaders, only to be forced to participate in a blindfolded “battle royal” with other young black men.
Even as he delivers a hopeful speech to the group, he is mocked and ridiculed at even suggesting the possibility that blacks might be equal to whites.
Even so, he is rewarded with a scholarship to a black college, where he thrives until an ill-fated turn as an escort to a visiting Boston-based trustee named Norton (Edward James Hyland), who takes an unhealthy interest in the sordid story of an uneducated black man named Jim Trueblood (McKinley Belcher III), and later collapses in a saloon frequented by poor blacks.
The Invisible Man is blamed for the incident, loses his scholarship and sent packing to New York City, where he is told he can earn his way back to college. He gasps at the wonders of bustling Harlem, a world where even the positions of authority are held by blacks, and where white drivers even stop at the direction of black police officers.
But his letters of recommendation turn out to be letters of ridicule, and after he fails to secure a job that will allow him to return to college, he has an ill-fated turn in a paint factory, ends in a hospital, and finally collapses in the street, where he is taken in by a kindly black woman named Mary Rambo (Deidre LaWan Starnes)
He later becomes a very visible spokesman and pawn in a political power struggle, pitted against the advocates of black nationalism, and begins to question whether he is indeed a leader of his people or a tool of others with a far different agenda.
Bougere gives a bravura performance as the Invisible Man, but Johnny Lee Davenport is right there with him as a fire-breathing preacher and the double-crossing college president who turns him away from the school.
Jeremiah Kissel shines in a series of roles, including the son of a New York City businessman who takes pity and tells Bouyere that his so-called letters of recommendation are bogus, and later as a fast-talking political operative named Brother Jack, who tabs the Invisible Man to be the spokesperson for the Brotherhood, an interracial group that is supposed to be helping the socially oppressed.
There is able support from local actor De’Lon Grant as Tod Clifton, the charismatic youth leader who is allied with Bougere, and Brian Coats, Joy Jones and Julia Watt in a variety of roles.
The production values are excellent, from Alex Koch’s projections moving the action forward and lending flash and sizzle to events such as the Harlem riot, Mary Louise Geiger’s lighting, and Troy Hourie’s purposeful industrial-style set with its light-up-the-world basement.
Credit goes to Ellison’s estate for allowing the project to go forward, Jacoby for his initiative and skill, giving the present generation who might be unfamiliar with Ellison’s book a chance to understand what it was like to be a black man in the decades when civil rights were but a far-off dream. See the show and if you haven‘t, read the book.
The Huntington Theatre Company and the Studio Theatre Company’s production of “Invisible Man.” Adapted for the stage by Oren Jacoby based on the novel by Ralph Ellison. Directed by Christoper McElroen. At the BU Theatre on the Avenue of the Arts through Feb. 3. http://www.huntingtontheatre.org.

← New Rep’s ‘Marry Me’ is a short, sweet treat
Plum’s skill closes the holes in ‘33 Variations’ →