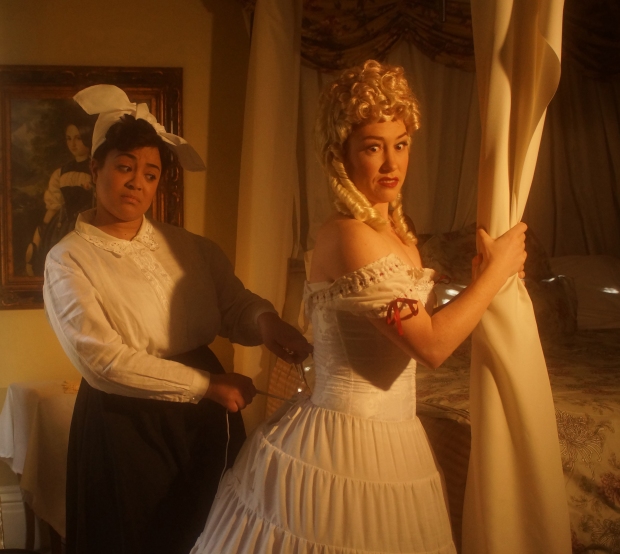 In an ad currently running on TV in the special election for the U.S Senate, a number of people of different races and genders all proclaim “I am Stephen Lynch.”

The idea is that almost everyone can identify with the candidate, who proclaims his working-class roots and humble beginnings.

In Lynn Nottage’s new play, “By the Way, Meet Vera Stark,” the three African-American actresses in search of movie roles might all claim “I am Vera Stark.”

In this case, Vera Stark is a a fictional character, but in point of fact the opportunities for African-American actors and actresses today have come as a result of the efforts of those who came well before them, who had indignities heaped on them due to racial bias and stereotypes and had to fight for the little scraps of roles as maids, slaves, chauffeurs or mammies that came their way.

Actresses such as Theresa Harris, upon whom Nottage based the character of Vera Stark, or Hattie McDaniel, the first African-American actor or actress to win an Oscar for “Gone With the Wind.”

In “By the Way, Meet Vera Stark,” Vera (Kami Rushell Smith) is an African-American maid in Hollywood in 1933 — just before the Hayes Code severely restricted what blacks in movies could do — who spends much of her time holding together the life of crumbling film star Gloria Mitchell (Hannah Husbands), “America’s Little Sweetie Pie,” who is staking what is left of her career on getting the lead role as a doomed octoroon in a Southern epic called “The Belle of New Orleans.”

In helping Gloria rehearse for her audition, Vera learns that there is also a part for a maid named Tilly in the production and the possibilities of other roles that could be played by blacks. That arouses the interest of Vera and her friends Lottie (Lyndsay Allyn Cox), who feels she is just right for one kind of role, and Anna Mae (Kris Sidberry), who decides her best route to stardom is to transform herself into a Latin American named Anna Maria Fernandez and dating the director of the movie, the pompous Maxmillian Von Oster (Gregory Balla).

Kami Rushell Smith, one of the best — and most versatile — actresses in the area has a ball as the sassy Vera, enlisting the aid of Leroy Barksdale (Terrell Donnell Sludge), a musician and part-time chauffeur for Von Oster.

Vera and Lottie sign on as maids at a dinner party given by studio mogul Fredrick Slasvick (Kelby T. Akin) , and become living, breathing racial stereotypes for the only types of roles available to blacks at time, hoping to appeal to the worst instincts of Von Oster.

Director Summer L. Williams shows a deft touch with the screwball comedy of the first act, but the second act just doesn’t work quite as well, probably more due to Nottage‘s work than the efforts of Williams or the cast. .

It centers around an academic symposium called “Rediscovering Vera Stark,” in which a panel debates Vera’s career, whether she sold out her race by taking the roles she did or was working to change things for the better from the inside. The problem is that it seems to be a pumped-up, directionless satire of such an academic exercise and never really rings true., rendering what they say about Vera meaningless.

As part of the debate, the panel views clips of a 1973 TV talk show appearance by Vera, her final interview before her strange disappearance, where she is interviewed by a smarmy, empty-suit talk show host named Brad Donovan (Akin) about her star turn in “The Belle of New Orleans.”

The talk show scenes are staged live, and there is some amusing interplay between Vera and a British rock star named Peter Rhys-Davies (Balla), but things fall apart when Donovan surprises Vera with an incredibly awkward and graceless reunion with Gloria .

Kudos to Johnathan Carr for his work in creating the scenes from the fictional black-and-white movie “The Belle of New Orleans” It is those precious celluloid moments when Smith as Vera gives the performance that she will forever be remembered for, before being consigned to the cinema trash heap of two-bit roles in two-bit movies.

“By The Way, Meet Vera Stark” isn’t a perfect piece. But the zany first act and some fine performances, especially by Smith and Husbands, make it s worthwhile evening.

Maybe it was just a coincidence, but on April 7 Lyric Stage held an open house for actors and actresses interested in auditioning for roles for next season, the theater stressing that it is committed to diversity and non-traditional casting. In that way, thanks, Vera Stark.