There’s a spring in the step of ‘On The Town’ 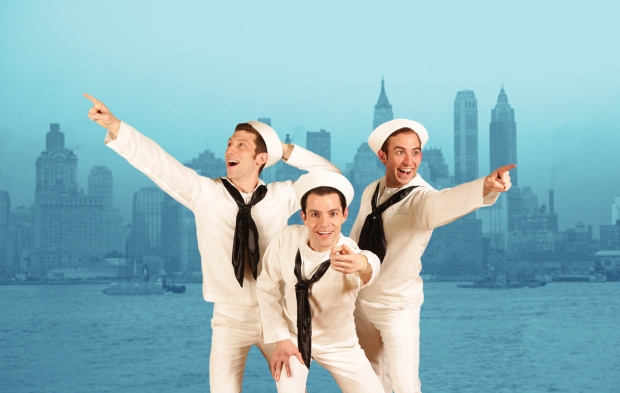 Zachary Eisenstat, John Ambrosino, and Phil Tayler in “On The Town.” Photo by Mark S. Howard.

BOSTON — Artistic Director Spiro Veloudos has always found a way to fit large-scale musicals such as “1776,” “Sunday in the Park with George” and “Follies” into his intimate theater atop the YWCA on Clarendon Street
A year ago, “Avenue Q” was breaking box office records at the Lyric Stage Company, eventually reaping a passel of awards.
Now comes the Lyric’s annual “spring musical” and you wonder what just how many huge production numbers and assorted choreographic miracles Veloudos and co-conspirator (and choreographer) Ilyse Robbins can shoehorn into the theater.
The short answer: quite a few. The Lyric Stage’s production of the musical “On The Town” brims with energy and enthusiasm, fine singing and dancing, and clever and effective staging.
The music, of course, is by the incomparable Leonard Bernstein, the lyrics and book by the team of Betty Comden and Adolph Green, based on Jerome Robbins and Bernstein’s ballet “Fancy Free.”
It is wartime New York City — 1944 — and three sailors have 24 hours leave in the city, and they aim to make the most of them. They all have big plans, those plans are derailed when Gabey (John Ambrosino) is smitten after seeing a picture of the reigning Miss Turnstiles, Ivy Smith (Lauren Gemelli) and sets off on a mission to find her and meet her.
Ozzie (Phil Tayler) and Gabey (Zachary Eisenstadt) join in the hunt, an the trio are off and running across a pastiche of NYC iconic landmarks.
But while looking for Ivy, Chip gets sidetracked, involved with a very welcoming cab driver named Hildy (Michele A. DeLuca) and Ozzie takes up with an anthropologist at the Museum of Natural History named Claire de Loon (Aimee Doherty), who is game for adventure despite being engaged to Judge Pitkin W. Bridgework (J.T. Turner). Turner steals several scenes as the much-put-upon older man with two simple words — “I understand” — always spoken at a time he shouldn’t, as Claire and the boys lead Pitkin on a merry chase around the city.
There are nice comic turns by Sarah deLima as Madam Maude P. Dilly, Ivy’s long-suffering mentor, and Robbins as Lucy Schmeeler, Hildy’s sniffling roommate who also gets involved with the boys.
“New York, New York” is an instantly recognizable production number and gets the show off to a rousing start — keep those feet out of the aisles or you might trip someone — and Ambrosino as Gabey has a voice born to sing such beautiful ballads as “Lonely Town” and “Lucky to be Me.”
Eisenstadt contributes athletic, acrobatic dancing as Ozzie and Tayler (Chip) is a fine comic actor who has enjoyed a series of recent successes.
As with several of his shows — most notably “Nicholas Nickleby” — Veloudos has made “On The Town” a Full Employment Act for local talent, cutting no corners along the way.
Robbins, a nonpareil choreographer who also did the musical staging, has also been winning plaudits as a director, and she and Veloudos together are a formidable team.
The production values are up to the Lyric’s exacting standards. Johnathan Goldberg’s music direction is full and lively, giving full body to Bernstein’s work, and Janie Howland’s scenic design is clever and effective, whether it’s suggesting the subway or a NYC nightclub. Scott Clyve’s lighting and Seaghan McKay’s projections add to the overall effect.
There are some nice added touches, including a huge cut-out of Eisenstadt, Ambrosino and Tayler in the lobby, meant to resemble the iconic poster of the movie version of “On The Town,“ that featured Frank Sinatra, Gene Kelly and Jules Munshin.
The days are longer, and the sun is out. Spring is in the air, and there is a spring in the step of every dancer who’s “On The Town.”
The Lyric Stage Company of Boston production of the musical “On The Town.” Music by Leonard Bernstein, book and lyrics by Betty Comden and Adolph Green, based on an idea by Jerome Robbins. Directed by Spiro Veloudos, choreography and musical staging by Ilyse Robbins. Through June 8 at the Lyric Stage Company, 140 Clarendon St., Boston. http://www.lyricstage.com.