Speakeasy’s ‘In The Heights’ raises the roof

Diego Klock-Perez as Usnavi (center) in a scene from the SpeakEasy Stage Company production of IN THE HEIGHTS, extended now thru June 16 at the Stanford Calderwood Pavilion at the Boston Center for the Arts, 527 Tremont Street in Boston’s South End. Tix/Info: 617-933-8600 or http://www.SpeakEasyStage.com. Photo: Craig Bailey/Perspective Photo.

BOSTON — If you were able to harness all the energy in the theater, it would light the city of Boston for a week.
As it is, the roof in the Roberts Theatre in the Calderwood Pavilion of the Boston Center for the Arts is being raised five days a week with the Speakeasy Stage Company‘s production of the Tony Award-winning musical “In The Heights.”
The energy and enthusiasm of youth melded with more seasoned actors is the recipe for success. Students from the Boston Conservatory — also known as the development league for Broadway — man some key roles in the show, which takes place over three days around the July 4 holiday a close-knit Latino neighborhood in the Washington Heights neighborhood in Manhattan, in the northernmost reaches of the borough.
Much of the show is based on the memories of composer and lyricist Lin-Manuel Miranda, with a book by Quera Alegria Hudes,
In an interview, Miranda said he was a fan of musicals growing up. He was especially inspired when he saw “Rent,” and there are faint echoes of Jonathan Larsen’s masterpiece in his work — even in the African-American character of Benny in his show. “rent” also had an African-American character named Benny. 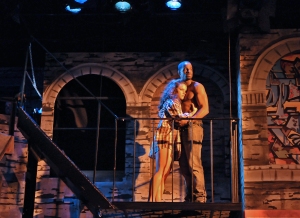 Santina Umbach and Jared Dixon share a moment on the fire escape in a scene from the SpeakEasy Stage Company production of IN THE HEIGHTS, Photo: Craig Bailey/Perspective Photo.

There are eclectic and engaging characters all around Miranda’s neighborhood.
Usnavi (Diego Klock-Perez) reluctantly runs a bodega that he inherited from his parents, who died when he was very young, but it also holds him prisoner because it limits his ability to move around and perhaps someday return to his native Dominican Republic.
He speaks in a freestyle rap — “the poet laureate of 183rd Street” — and dreams of being with the glamorous Vanessa (Alessandra Valea), who works at Daniela’s hair salon but longs to escape the barrio and her alcoholic mother.
Usnavi also looks out for his younger cousin Sonny (Jorge Barranco), a young, brash, funny but still insecure boy who looks up to his cousin.
Abuela Claudia (Carolyn Saxon) is everyone’s grandmother in the barrio and she helped raise Usnavi after the death of his parents. She comes into a windfall that has the potential to changes the lives of several people in the barrio.
Speakeasy Artistic Director Paul Daigneault, who directed this production, teamed with local director/choreographer Larry Sousa to create a show that is constantly in motion with a variety of Latin rhythms.
The show’s central character Nina Rosario (Santina Umbach) has won a scholarship to Stanford, and she has carried with her on the plane to California the hopes and dreams of the entire neighborhood.
But now she has returned home after leaving school, and father Kevin (Tony Castellanos), who operates a struggling car service, is upset at both her leaving school without telling her parents and her continuing relationship with Benny (Jared Dixon), who works for her father and whose dream is to open his own business some day.
As Nina, Santina projects sweetness and innocence of a young girl used to doing the right thing, as well as the strength and independence to chart her own course in life.
Sweet-voiced Anthony Alfaro is the Piragua Guy, the shaved-ice entrepreneur constantly trying to stay one step ahead of Mr. Softy.
Miranda’s score has a distinct salsa flavor, but Miranda has shown the requisite touch with the ballads such as Nina‘s “Everything I Know.”
“In The Heights” is a family musical at heart. Family is important, and the characters care about each other and their neighborhood, their dreams, and each other’s dreams.
Nicholas James Connell as emerged as one of the finest young music directors in the area.  He is comfortable with different genres and styles, and he and his crew keep beat the beat going all the way to the end — and then some.
With its dancing, singing and heartfelt portrayals, “In The Heights” hits the heights.
The Speakeasy Stage Company production of the musical “In The Heights.” Music and lyrics by Lin-Manuel Miranda, book by Quiara Allegria Hudes. Directed by Paul Daigneault. Choreography by Larry Sousa. At the Calderwood Pavilion at the Boston Center for the Arts through June 16. http://www.speakeasystage.com

← There’s a spring in the step of ‘On The Town’
The ‘Pirates’ have a great time, and so will you →