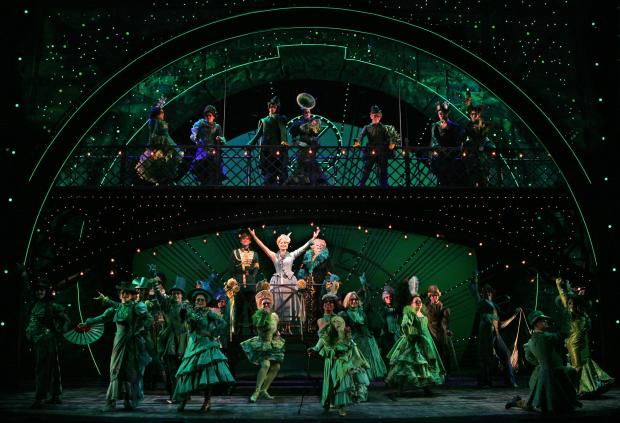 Glinda (Jenn Gambatese) addresses the citizens of Oz in a scene from “Wicked.” Photo: Joan Marcus

BOSTON — “It ain’t easy being green,” Kermit the Frog once famously sang.
And if you think it’s not easy for a frog, it sure as heck isn’t easy for a young woman, even if she has special powers.
That would be Elphaba, the heroine — or is it villain? — of the smash-hit musical “Wicked.” The national tour of the show has returned to the Boston Opera House through Sept. 15.
Since its debut in 2003, “Wicked” has become a pop culture icon and remains one of a great theatrical spectacles of recent decades — perhaps the greatest since “Phantom of the Opera” — with a compelling, character-driven story, dazzling colors and dramatic special effects.
“Wicked” is the backstory of two of the major characters of “the Wizard of Oz”: Glinda , the Good Witch, and Elphaba, who becomes the Wicked Witch of the West.
The plot of Winnie Holzman’s book as adapted from the best-seller by Gregory Maguire, dovetails nicely into the events of “The Wizard of Oz” itself, purporting to offer explanations on how there came to be a Tin Man and Scarecrow, the twister that brought Dorothy and Toto, and the machinations of The Wizard himself.
While it ain’t easy being green, another thing that isn’t easy is stepping into the key role of a production before a sold-out house that includes a passel of critics, but that’s exactly what Laurel Harris did as Elphaba Thursday night. Harris, normally the standby for Alison Luff, didn’t seem to miss a beat in Thursday’s performance, singing with confidence and aplomb the role of the girl born with emerald green skin who grows up to be smart, passionate and a misunderstood outsider — as well as the Wicked Witch of the West
There’s something about bad girls. Elphaba has the more interesting story, the better songs (“Defying Gravity’) At times, she even evoked the cackle reminiscent of the late Margaret Hamilton, who played the Wicked Witch of the West in the movie “The Wizard of Oz,” and whose face launched a million nightmares. 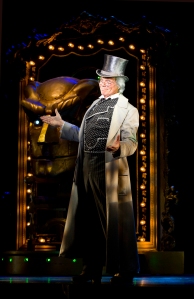 John Davidson as The Wizard in “Wicked.” Photo: Joan Marcus

As Elphaba goes, so goes the production, although Glinda, the Good Witch (Jenn Gambatese) is the co-star, even if composer Stephen Schwartz doesn’t give her as many good tunes as he gives Elphaba.
“Wicked” opens with the death of Elphaba, who was conceived during an affair between Munchkin Governor’s wife and a mysterious stranger with a bottle of green elixir.
Glinda tells the residents of Oz the story of the events of her and Elphaba’s lives, and asks them to consider her side of the story, as she was rejected from the moment she was born.
Glinda, as written by book writer Winnie Holzman based on the novel by Gregory Maguire, and performed by Gambatese,. has a good heart but is a bit of a vacuous valley girl, prone to malapropisms, a la Mrs. Malaprop in Sheridan’s “The Rivals.”
As the ever-popular blonde, she is occupying the highest rung on the social ladder, from where she can look down upon others — including Elphaba — at the Shiz University run by Madame Morrible (Kim Zimmer), who sees in Elphaba a promising sorcery student who deserves to meet The Wizard.
While at the school, Elphaba is caring for her crippled sister Nessarose (Jaime Rosenstein), who becomes smitten with the Munchkin Boq (Jesse JP Johnson).

Elphaba, meanswhile, is distraught at the way The Wizard, aided by Madame Morrible,
Treats the half-human, half-animal creatures of Oz such as Clifton Davi, as Dr. Dillamond, the half-goat, half-human former professor who loses his job as Madame Morrible’s school and ends up being caged.
Elphaba makes it her mission to rescue the animals now being caged — who knew there was a PETA chapter in Oz?– making her an outlaw and an outcast.
There’s also the love triangle involving Glinda, Elphaba and a Winkie prince named Fiyero (Curt Hanson).
“Wicked” benefits from a charming, witty performance by veteran John Davidson as The Wizard, still in great voice at the age of 71. Framingham’s Kevin McMahon plays their father and an official from Oz while filling the role of understudy for two key parts, the Wizard and Dr. Dillamond.
The dazzling set by Eugene Lee — whose work has long been featured at Trinity Rep in Providence and Boston theaters — is part of the spetacle, bling-green sparkles and lights, the amplified, pumped-up Oz, and the fire-breathing dragon. In all, there are 175,000 pounds of scenery animated by five miles of cable.
Schwartz’s score includes songs that have become part of the pop song catalogue (“Popular,” “Defying Gravity” and “For Good”) and other songs (“No One Mourns the Wicked”,” “Wonderful” that set the tone and advance the action
“Wicked” remains a sterling evening of entertainment and an uplifting, inspiring look at friendship, engagingly performed and spectacularly displayed, and will be the Opera House in Boston through Sept. 15.
A day-of-performance lottery for a limited number of $25 orchestra seats will be held two and one-half hours prior to each performance at the Boston Opera House; cash purchases only, two tickets per person.
The national touring production of “Wicked.” Music and lyrics by Stephen Schwartz, book by Winnie Holzman, based on the novel by Gregory Maguire. Directed by Joe Mantello. Musical staging by Wayne Cilento. Scenic design by Eugene Lee. At the Opera House , Washington Street, Boston through Sept. 15. http://www.broadwayinboston.com

← ‘Cavalia’s Odysseo’: Was it a dream or real?
Troubled teens flounder in ‘This is Our Youth’ →