Troubled teens flounder in ‘This is Our Youth’ 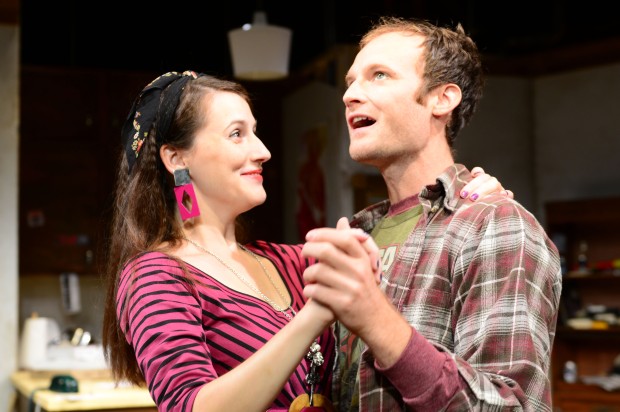 GLOUCESTER — The characters in Kenneth Lonergan’s “This is Our Youth” are like those gerbils you see on those tiny treadmills in those cages. They seem to be going like hell but actually aren’t getting anywhere.
Lonergan’s 1996 work, now being performed at the Gloucester Stage Company through Aug. 25, chronicles the life and times of three young people on New York City’s Upper West Side in 1982.
They are spinning their wheels, and they have an affinity for making bad decisions and following them up with even worse ones.
Alex Pollock, who proved his chops for playing characters not quite in in the mainstream of society in his award-winning performance in Company One’s “The Aliens,” is Warren Straub, a 19-year-old cowering, anxious mess who’s been thrown out of his house by his father for smoking too much pot, and shows up on Saturday evening in March at the doorstep of the one-room apartment of his friend Dennis Ziegler.
Kudos to Jenna Lord McFarland’s set for some detailed nuances from the era which she puts to good use in portraying said residence. Dennis lets him in because Warren has pot and, apparently, money, which he has purloined from his father, who is involved in some shady dealings.
Jimi Stanton as Dennis is intense, passionate, pumped-up, and boiling over with ideas — many of them illegal — but still someone who is convinced he has all the answers.
Neither Warren nor Dennis have much to do with their families — what a shocker — and there doesn’t seem to be much going on in the present time when it comes to jobs and education.
When it comes to women, the socially awkward Warren is in the middle of “a very long drought,” as Dennis often reminds him, “like the Irish Potato Famine.”
Amanda Collins is sweetly vulnerable as Jessica Goldman, the young girl who stumbles
into the apartment and Warren’s life, not knowing that Warren has been pining for her all along.
She is wary at first, trapped in the apartment with someone she doesn’t know, but slowly the defenses break down and eventually there is a tryst — a very expensive one, at that. But Warren fumbles the ball in the immediate aftermath.
In a desperate attempt to recoup their losses, Warren trashes the cocaine he and Dennis were hoping to sell to make back the money they blew. Then Warren offers up a pitiable collection of toys and games from his youth he is forced to sacrifice to make up for some of the missing money.
Among the possessions is a prized vintage baseball cap, a gift from his grandfather, which he touchingly and lovingly offers to Jessica, who knows that accepting the cap may well lead to something she really doesn’t want and the end of the dreams she has.
Lonergan’s characters are largely what we were once upon a time, but they have the added burden — if you can call it that — of being upper-middle class children of affluence, who appear to have catered to and at every turn, content to get stoned wherever and whenever they can
They don’t seem to have a future, but at times there are glimmers of hope, such as the scene when Warren and Jessica engage in a touching dance, a scene to me that recalled the scenes between the Gentleman Caller and Laura in “The Glass Menagerie.”
Director Lewis Wheeler and his skilled cast have nailed the anxieties and awkwardness of misspent youth — take me back to those summers on Cape Cod — the joys and passion, the lessons we learn and the hard bumps we take along the way. It is a fun, often poignant ride, and well worth taking.
The Gloucester Stage Company production of Kenneth Lonergan’s “This is Our Youth.” Directed by Lewis Wheeler. Sets by Jenna McFarland Lord. Costumes by Gail Astrid Buckley. At the Gorton Theatre, 267 E. Main St., Gloucester, through Aug. 25. http://www.gloucesterstage.org