BEVERLY — Yes, “La Cage Aux Folles is a family musical. It’s just about a different kind of family.
The musical now at the North Shore Music Theatre through Oct. 6 has a big heart, big laughs, a great score and superb choreography.
“La Cage” is a racy club in Saint-Tropez on the French Riviera, featuring, as it readily admits, an illusion: what appears to be beautiful dancing girls who are actually men.
The club is owned by Georges (Charles Shaughnessy) and the star of the club’s shows is his longtime lover, Albin (Jonathan Hammond), who plays Zaza, the resident temperamental diva.
Georges’ son Jean-Michel (Zach Trimmer) was raised by both Georges and Albin after he was conceived in a “one-off” engagement between Georges and a showgirl that promptly signaled Georges’ exit from the heterosexual world.
Shaughnessy is a fine actor and may not have the greatest set of pipes, but in many of the musical roles he’s played — King Arthur in “Camelot,“ Henry Higgins in “My Fair Lady,” — he’s been asked to simply put across a song and put across a song he can, as he shows again here.
Hammond, who trained at Harvard’s A.R.T. Institute, earned many fans on the North Shore last year with his IRNE Award-winning performance in “Guys and Dolls,” and he scores here again as Albin. 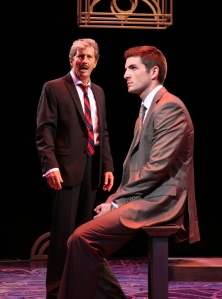 It is nigh near impossible to go too far over the top when playing Jacob, Albin’s outrageous cross-dressing maid/butler, and Nikko Kimzin pulls out all the stops as he presses his dreams of starring in a show at “La Cage.”
The plot of “La Cage” revolves around Jean-Michel’s plan to get married to the lovely Anne (Stephanie Martignetti). The only problem is that Anne is the daughter of a notorious right-wing politician named Dindon (Larry Cahn), who is on a crusade to close down clubs such as “La Cage” and espouses “family values” — but not with Georges and Albin in mind.
Because Anne’s parents are coming to visit, Jean-Michel proposes to Georges that his birth mother Sybil return for a cameo appearance, and that Albin be put back into the closet during their visit.
That understandably riles Albin. In one hilarious scene Georges attempts to “smooth out” some of Albin’s mannerisms so he can pass as Jean-Michel’s Uncle Albert.
Sybil pulls put at the last minute, Jean-Michel is short the mother he promised the Dindons, so entering the breech comes Albin … to hilarious results.
Veteran Maureen Brennan gives verve and spunk to her role as the put-upon wife of the obnoxious Dindon and Paula Leggett Chase is also fine as Jacqueline, the restaurant owner who becomes caught up in the events.
Trimmer displays a lovely voice and a pleasant stage presence as Jean-Michel and Martignetti is wholesome and winning as Anne.
I’ve always gauged a score’s worth by how many theater-goers are humming a tune on the way out of theater at the end of the show. In that category, this production of “La Cage” gets a perfect five hums out of a possible score of five.
As much as he has been honored, you can’t say enough about composer Jerry Herman, who wrote the music and lyrics, and the fine book by Harvey Fierstein based on Jean Poiret’s play.
The score includes the heartbreakingly beautiful “Song on the Sand,” the equally lovely “Look Over There,” the companion pieces “We Are What We Are” and “I Am What I Am,” and the dazzling production number “The Best of Times.”
Director Charles Repole seemed right at home in NSMT’s arena stage in his first effort at the theater. The leggy Cagelles are in fine form throughout, thanks to the excellent choreography by Michael Lichtefeld.
Since all the NSMT does is musicals, it’s hardly news when a score is well-performed and in balance with the voices of the actors, but music director Dale Rieling and his troops were all on the mark at Wednesday evening’s press performance.
Don’t dare sneak out early and miss the cast’s joyous, uplifting encore presentation of “The Best of Times.”
I can guarantee you will leave the theater feeling a lot better than you did going in. And how many times can you say that?
The North Shore Music Theatre’s production of “La Cage Aux Folles.” Music and lyrics by Jerry Herman. Book by Harvey Fierstein, based on the play by Jean Poiret. Dirceted by Charles Repole. Scenic design by Bert Scott. Costume design by Marcia Zammarelli. Lighting design by Martin E. Vreeland. Sound design by Christopher M. Evans. http://www.nsmt.org