‘Make Up Your Mind’ is more silly than funny 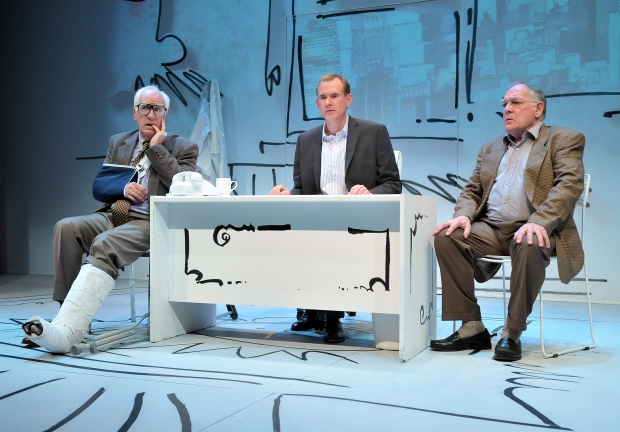 From left: Richard Snee, Barlow Adamson, and Ross Bickell in a scene from the SpeakEasy Stage Company World Premiere production of “KURT VONNEGUT’S MAKE UP YOUR MIND,” running now through Nov. 30 at the Calderwood Pavilion at the Boston Center for the Arts, 527 Tremont Street in Boston’s South End. Tix/Info: 617-933-8600 or http://www.SpeakEasyStage.com. Photo: Craig Bailey/Perspective Photo.

BOSTON — The Speakeasy Stage Company has become known as a cutting-edge company, unafraid of taking on any piece. It has a litany of successes, many of them award-winning productions.

And when the theater announced “Kurt Vonnegut’s Make Up Your Kind” was having its world premiere there, the buildup and the anticipation were keen. It’s a piece the author had worked on on and off for years before eventually abandoning it.

Playwright Nicky Silver assembled the original drafts of the author, who died in 2007, and drew from several of them when putting it together, eventually tweaking the piece by adding a Vonngeut character (Richard Snee) who observes the action and makes knowing comments as the action moves along; the dialogue of the Vonnegut character is taken from Vonnegut’s actual words.
Unfortunately, “Make Up Your Mind” plays as if it was, indeed, stitched together.
The piece is set in 1986. Barlow Adamson plays Roland Stackhouse, a former telephone company employee, has set up shop as Make Up Your Mind, Inc. advising clients on how to be more decisive.
His clients include a billionaire’s wife named Karen Finch (Tracy Goss) who takes her newfound certitude a bit too far when it comes to Roland, and a compulsive smoker named Ottis Fletcher (Snee, in a dual role).
It turns out that Roland’s device for keeping his clients on the straight and narrow is an enforcer named Raymond, who uses physical intimidation or, in a pinch, maiming and assaulting, as a way to “remind” clients to stay on track.
Barlow Adamson does both bemused and confused very well — I refer you to Lyric Stage’s “Chinglish” last season — but here he is a man without a country. He and Goss seem a mismatched set from the beginning, and that they falls for each other at the drop of the hat seems somewhat beyond belief.
Their tryst turns into a titanic night of passion that eventually becomes a box-office blockbuster.
Later, she will also become physically involved with endless stream of dentists. Huh?
Meanwhile, Roland has abandoned his Eskimo wife and kids to live in sin with Karen at the YMCA.
Marriage counselor father (Ross Bickell) is no fan of his son and the choices he makes — at least someone is thinking straight
At some point, Roland loses all control of Raymond — who hasn’t been paid and is out for blood — and everyone is forced to go into disguise.
Yes, there are some chuckles, especially from Snee as the long- suffering-and-loving-it Fletcher, and fleeting glimpses of Vonnegut’s talent, but after a promising start the piece just doesn’t sustain itself as a fully-realized work.
There is some interesting animation by set designer Eric Levinson, which recalls some of Terry Gilliam’s best work with Monty Python.
I don’t know how either the actors or director Cliff Fannin Baker, given the shortcomings in the material, could have achieved a better result.
The problem is that there’s a big difference between silly and funny and “Make Up Your Mind” very rarely bridges that gap.
The Speakeasy Stage Company’s production of “Kurt Vonnegut’s Make Up Your Mind.”
Assembled by Nicky Silver. Directed by Cliff Fannin Baker. At the Calderwood Pavilion for the Boston Center for the Arts through Nov. 30. http://www.speakeasystage.com.