‘A Little Princess’: A bright bulb on holiday tree 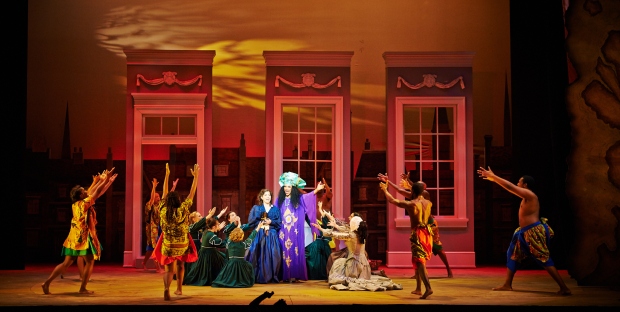 DORCHESTER — Sometimes, it takes a little work to see that brightest bulb on the Christmas tree.

You move a branch that’s obscuring your view and — aha! — there it is.

That’s the case with the Fiddlehead Theatre Company’s production of the musical “A Little Princess,” now happily ensconced at the Strand Theatre in Dorchester through Dec. 8.

It would be a crime if this joyful, uplifting holiday celebration — perfect for the entire family — were somehow overlooked in the plethora of “Nutcrackers,” “Carols” et al.

The Andrew Lippa-Brian Crawley score is tuneful, moving and gloriously sung by a passel of fine voices, and is performed skillfully by the orchestra led by Balint Varga.

Director Meg Fofonoff, Fiddlehead’s artistic director, has seamlessly melded a company headed by Equity actors and other experienced, talented performers and the result is a cast with no weak links.

“A Little Princess” is based on the 1905 book by Frances Hodgson Burnett as adapted by Crawley. It is 1838 and Sara Crewe (Sirena Abalian), the daughter of Captain Reginald Crewe (Jared Troilo), is barefoot and happy growing up in colonial West Africa, raised by her father and their African neighbors she has grown to love.

But when her father — an intrepid, adventurous explorer whose aim is to eliminate slavery in the area — embarks on a perilous journey to Timbuktu, Sara is sent back to London to a boarding school.

Early on, she finds herself shunned by fellow students because of her wealth and her high spirits, even having the gall to envision herself as a princess. She befriends the less popular girls, much to the disgust of her haughty fellow student Lavinia (Tori Heinlein), and eventually wins over the group.

Abalian, whose resume is stacked with fine performances at a young age, is luminous as Sara. Her voice soars as the script and her dreams and carry her back and forth from the Africa she knew as a child and London.

She never despairs, even as she finds herself a penniless orphan forced into servitude after her father is reported dead and his property seized.

Shana Dirik is in her usual fine self as Miss Minchin, the dour headmistress of the boarding school. She’s gloriously malevolent as she sings of Sara’s good fortune (“Lucky”) compared to herself. Her long-suffering sister Amelia (Bridget Bierne) is a good-hearted but often overwhelmed soul who usually knuckles under when confronted by her sister.

Despite Miss Minchin’s overbearing cruelty, Sara is able to escape in her dreams by sheer will and her attitude and unquenchable spirit is always the “little princess” she imagines herself to be.

There are fine supporting performances from Jared Dixon as Pasko, Captain Crewe’s friend who is sent back from Africa to London to find Sara and bring her back to Africa; Liliane Klein as a most regal Queen Victoria, and Aubin Wise as Aljana, Sara’s nanny during her time in Africa and Pasco’s mother. Sara names the doll she takes from Africa to London after Aljana, her spirit guide.

The gorgeous production numbers are rolled out one by one, including “Live Out Loud,” “Let Your Heart Be Your Compass,” “Timbuktu Delirium,” and “Almost Christmas,” performed by two different dance ensembles, one based in Africa and the other in London, under the direction of choreographer Matt Romero.

Fofonoff and company have paid attention to detail, and it all works. “A Little Princess” is a musical with great heart and soul, with messages of tolerance and love that ring ever truer in this holiday season.

For those who haven’t made their way to the Strand Theatre, it is just a few minutes off Route 93. It’s easy to get to and there is convenient free public parking just a block away from the theater at the Ramsey Street Municipal lot, located at the intersection of Dudley Street and Columbia Road behind CVS Pharmacy and Payless Shoes.

The theater has also scheduled talk-backs with Composer Andrew Lippa after the Nov. 29 performance and with lyricist/book writer Crawley after the Dec. 6 performance.

Don’t waste any time buying your tickets. You can thank me later.

The Fiddlehead Theatre Company production of the musical “A Little Princess.” Lyrics and book by Brian Crawley, music by Andrew Lippa, based on the book by Frances Hodgson Burnett. Directed by Meg Fofonoff. Choreographed by Matt Romero. Music direction by Balint Varga. Tickets $25-45. http://www.fiddleheadtheatre.com