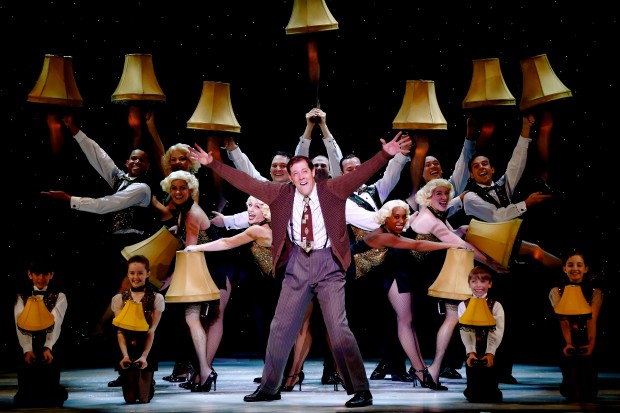 JOHN BOLTON (center) and company in a scene from A CHRISTMAS STORY, THE MUSICAL. photo credit: (c) 2013 Carol Rosegg

BOSTON — For those of you who have been glued to the TNT and then TBS marathon showing of “A Christmas Story” on TV each and every Christmas for the past 15 years, I have good news: There is another reason to celebrate.

“A Christmas Story, The Musical” is based closely on the beloved 1983 movie that starred Darren McGavin as The Old Man and Peter Billingsley in the tale of young Ralphie Parker’s all-out quest to have Santa Claus deliver a “Red Ryder Carbine Action BB Gun” under the tree on Christmas.

The musical became a surprise hit on Broadway last winter — Billingsley was one of the producers — garnering several Tony nominations, and now the national touring production is at the Citi Performing Arts Center’s Wang Theatre through Dec. 8. 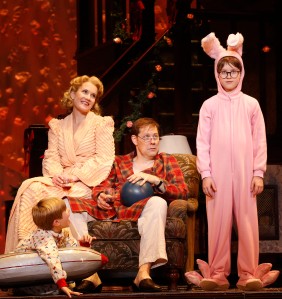 The musical takes all that is funny and good about the movie and amplifies and pumps it up with a large cast and a crew of young actors who are almost too talented — and too cute — to believe.

Remember the fantasy sequences when Ralphie imagines coming to the rescue (“Ralphie to the Rescue”) or imagines Miss Shields swooning over his essay? Ralphie’s indiscreet use of the “F word” and subsequent dinner of Lux soap? The flagpole incident? Ralphie’s beatdown of the bully Scut Farkus? Ralphie’s bunny pajamas? It’s all here.

This is actually Ralphie’s third bite of the apple: A stage version of the movie has also been around for a few years, done in recent seasons by the Stoneham Theatre and the New Repertory Theatre.

First-rate production values you don’t always see in touring productions Lovely scenic design by Walt Spangler that captures both the warmth of the Parker home on Cleveland Street, Santa’s home at Higbee’s Department Store, and points in between.

Carlyle’s choreography shines in numbers such as “The Genius on Cleveland Street“ and “It All Comes Down to Christmas.”

And what would the musical version of “A Chrismas Story” be if the leg lamp — you can buy one in the lobby — were not celebrated with its own production number, the hilarious “A Major Award.”

But this version — dare I say it — trumps all that has come before It is 1930 in Hohman, Indiana, and despite the Depression, hopes are high for Christmas in the Parker household on Cleveland Avenue. But can Ralphie overcome the the skepticism and doubts of all the adults in his life — including Santa — to find that Red Ryder BB gun under the tree?

As good as Jake Lucas is as Ralphie, Noah Baird is his equal and then some as tormented younger brother Randy, he of the snowsuit so suffocating he can’t put his arns down

John Bolton is a hoot as the blustering Old Man, cursing the furnace and warding off the Bumpus hounds, and Erin Dilly shines as the warm-hearted mother doing her best to get her family through the frigid Indiana winter and safely across the Christmas finish line.

Kudos to famed animal trainer William Berloni’s for his spot-on training of Pete and Lilly as the Bumpus hounds who terrorize The Old Man.

Somehow you knew that inside of Ralphie’s teacher — the normally restrained Miss Shields (an ebullient Caroline O’Connor ) — there was a showgirl waiting to be let out, and let it out she does in a tap-dance spectacular number in the second act, “You’ll Shoot Your Eye Out.”

“A Christmas Story” is going nowhere without a corps of talented youngsters, and they are truly remarkable and beyond cute, led by the aforementioned Lucas and Baird and featuring an amazing young tap dancer named Luke Spring.

Holding it all together is Dan Lauria as Jean Shepherd, whose remembrances and stories formed the basis for the film and who narrated the film version. Lauria is a warm, welcoming presence as Shepherd, his wry humor and commentary providing the perfect accompaniment to the merriment onstage.

“A Christmas Story, The Musical” will put a smile on your face, leave you with a lump in your throat and send you out of the theater feeling warm-hearted and happy this holiday season.

The national touring production of “A Christmas Story, The Musical.” Music and lyrics by Benji Pasek and Justin Paul. Book by Joseph Robinette, based on the motion picture “A Christmas Story” and the book “In God We Trust, All Others Must Pay Cash” by Jean Shepherd. Directed by John Rando. Choreographed by Warren Carlyle. At The Citi Performing Arts Center Wang Theatre through Dec. 8.