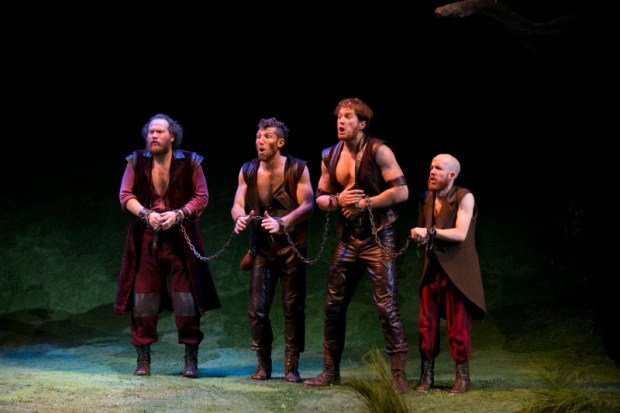 CAMBRIDGE — The legend of Robin Hood has been told so many different times in so many different ways — even Mel Brooks took a whack at it — that you would be hard-pressed to find an angle that hasn’t been used.
But the American Repertory Theatre’s production of “The Heart of Robin Hood” is fresh, endlessly witty and clever, and beautiful to the eye and ear.
First seen at the Royal Shakespeare Company in 2011, author David Farr has tinkered with standard version of events the and come up with a delightful new take, with Marion (Christina Bennett Lind) reincarnated as a tough-minded, take-charge heroine who knows what she wants and how to get it. 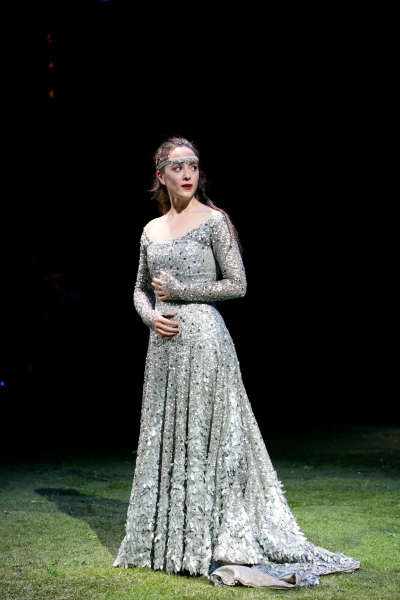 It turns out that yes, Robin Hood (Jordan Dean) and his sidekicks have indeed been stealing from the rich but have also decided that charity begins at home. All of the ill-gotten gains goes right back into their own coffers, and that both horrifies and fascinates Marion, who must meet Robin.
How do you find a thief? Become a thief! So Marion embarks on her own criminal enterprise in Sherwood Forest as Martin of Sherwood and his trusty sidekick, Big Peter (Christoper Sieber, with pun very much intended), who steal from the rich and give to the oppressed, overtaxed peasants. Echoes of Shakespeare‘s “As You Like It“ and “Twelfth Night” and so many other plays.
That predictably attracts the attention of Robin Hood (Jordan Dean). Robin and his merry men are strong, athletic — the fight scenes superbly choreographed by Joe Bostic — but very rough around the edges and raggedy in appearance, actually what Farr was trying to do in reverting to a less-civilized Robin.
Robin tells Martin of Sherwood why women are not welcome in the group. “They make us rash and unreliable.”
This “Robin Hood” is a very physical production, and it wears its physicality as a point of pride. It has some of the elements of last year’s ART hit, “Pippin,“ with dazzling feats of strength and derring-do rope acrobatics, including a pas de deux on the ropes that dangle 24 feet from the stage ceiling, often an entrance point for Robin and sidekicks.
Sieber steals almost every scene he’s in as Pierre/Big Peter — Marian’s servant and “clown” turned swashbuckling robber — which would surprise no one who has seen him on Broadway or in his IRNE Award-winning performance in the national tour of “La Cage Aux Folles.”
Pierre is a foppish, peace-loving sort but has great tastes in many areas — witness the
natty green outfits he designs for himself and Marion that attract a compliment from Robin himself.
As Martin, Marion starts to smooth out Robin’s rough edges, at least when it comes to the redistribution of wealth and Robin’s duty to serve and protect the oppressed among them.
Damian John as Prince John would make the villains in those Saturday afternoon matinee B movies blush with envy as he conspires to overthrow his brother, King Richard, while also blackmailing Marion onto marrying him and murdering anyone who stands in his path.
Andrew Cekala has delivered several strong performances on the ART stage at a tender age , and he is very strong again as Jethro Summers, whose father was murdered by Prince John and who flees Prince John‘s clutches along with sister Sarah (Claire Candela).
Director Gisli Orn Gardarsson has assembled a top-notch production team to craft the vision he and author Farr imagined , and on opening night he also looked right at home in the role of Much Miller in the place of Andy Grotelueschen.
“Robin” is played out in set designer Borkur Jonsson’s gorgeous Sherwood Forest, complete with a working pond, towering oaks, and green hills that allows actors to slide quickly down and be part of the action. Then there’s the holes in the stage through which actors disappear.
The Loeb Drama Center has been reconfigured to put the audience on three sides with the action in the middle.
It was decided that the Connecticut-based folk band Poor Old Shine would provide a lively musical accompaniment and it works beautifully. They warm up the theater-goers before the show and the music and lyrics by Farr and the band are en pointe.
Poor Ole Shine is good enough — and versatile enough — to provide whatever music the action calls for.
“Robin Hood” never takes itself too seriously; there are several running gags during the show, including the band trying unsuccessfully several times to get Robin to join them ins song, and the theme from “Jaws” foreshadowing the sudden appearance of a shark — a shark — in Sherwood Forest.
This “Robin Hood” is a delight — fast on its feet, funny and lovely to behold. It’s a welcome addition to the holiday calendar.
The American Repertory Theatre production of David Farr’s “The Legend of Robin Hood.” Music by Poor Old Shine. Lyrics by David Farr and Poor Old Shine. Directed by Gisli Orn Gardarsson. At the Loeb Drama Center through Jan. 19. http://www.amrep.org.

← WFT’s ‘Life’ is a skilled retake of a cultural icon
‘Henry VIII’ isn’t Bard’s best, but it is well done →