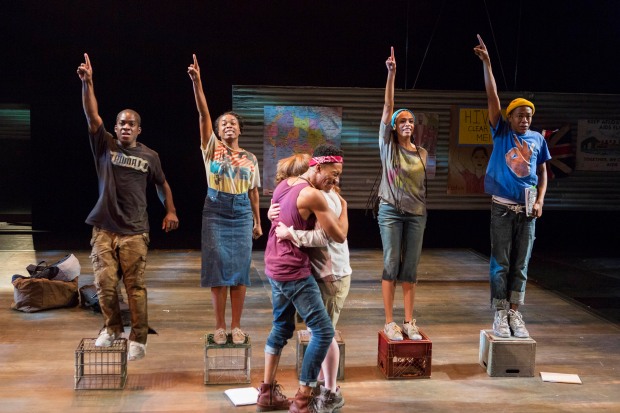 CAMBRIDGE — When you travel 7,000 miles to find yourself, what happens when you feel even more lost than you were before you started?
That was the situation for a young black man named Griffin Matthews faced when he followed his heart on a journey to Uganda to volunteer building schools, only to find out early on that he was on a bit of a fool’s errand.
And while the 7,000-mile trip was a journey of one sort, he’ll also undergo another very different kind of journey in the new musical “Witness Uganda,” now at the American Repertory Theatre through March 16.
The new work is original and funny, a story about faith and courage, a very personal work close to the heart of creators Matthews and partner Matt Gould, and a work being staged by them each night — Matthews is playing himself and partner Gould, who wrote the score, is conducting the band.
The production is based on the real-life experiences of both Gould and Matthews, and their non-profit Project Uganda, which is putting 10 Ugandan students through school.
Matthews has raised $50,000 a year to support the students since the first visit he made in 2005, and is on track to do it again, at least partly because of the success of this work.
His is a story told with understatement and simplicity, with no attempt to gild the lily in an effort to stoke its effectiveness.
Matthews had just graduated from Carnegie Mellon University and was attempting to launch an acting career when he was booted out of the choir at his church for being gay.
“Imagine, a gay in the tenor section,” Andrews muses to friend Ryan (Emma Hunton), trying to kickstart her own singing career and being rejected because her body didn’t conform to the presumed image of a country-music star.
On a whim, Matthews takes what savings he has amassed and embarks on a mission to build schools in Uganda.
One of his first encounters is with Joy (Adeola Role), a world-weary sort who has seen many do-gooders like Griffin come and go as she manages the compound where the volunteers live.
Griffin also befriends Jacob (Michael Luwoye), who seems a lost soul while performing an endless number of tasks around the compound.
Andrews — his Christian faith already on the rocks — has his faith shaken again when the operation run by Pastor Jim — never seen but definitely felt — seems geared to building, building, building instead of nurturing and caring for the children under his control.
Andrews befriends a group of teenage street orphans (Nicolette Robinson, Kristolyn Lloyd, Jamar Williams, Tyrone Davis Jr.), adrift because school is not only not free in the country, but very, very expensive,
And while Matthews is African-American, to some of the residents of Uganda, he is not African at all — the teens call him “muzungu,” the Lungundan word for “white.”
Add to that an atmosphere that is virulently homophobic, and Matthews is walking on eggshells even as he puts himself — and later Ryan — on the line to give the teens a future.
He takes it upon himself to set up a school for his orphans, teaching life skills and building their confidence. The students include Jacob, who is spending times away from his chores and being pulled in a different direction, much to the ire of both Joy and Pastor Jim.
After returning home, Griffin’s friendship with Emma is stretched to the limit in trying to meet the demands of the students, and in a subsequent trip back to Uganda he will find more heartache and disappointment. All in all, it is an experience, as Andrews freely admits, that he might not have taken had he known what it would involve.
Recreating Uganda in the Loeb Drama Center begins with Peter Negrini’s deft, breathtaking projections based on the hills, villages and countryside of Uganda. Add Gould’s score with African rhythms spiced with echoes of gospel and pop, including numbers such as the first-act closer “New World,” “Bricks” and the pulsating, throbbing rhythms of “Let It Rain,” and the sustained, joyous movement created by choreographer Darrell Grand Moultrie.
Gould, whose experience spending time in the African country of Mauritania in the Peace Corps lent inspiration in writing the score, leads a band that performs with joy and panache.
Director Diane Paulus’ sure hand at the helm has provided Andrews and Gould with signposts and guidelines to help them navigate their way through the thickets of their first musical.
And while Matthews and Gould may change some lives, changing attitudes may take longer. Matthews hints that he and Gould have not directly told the students they are gay.
As part of the engagement, Andrews, Gould and cast members will be speaking to theater-goers after performances.
From the comfort of your seat in Harvard Square and the Loeb Drama Center, you can take that 7,000-mile journey to Africa with Griffin Andrews. Do it.
The American Repertory Theatre production of the new musical “Witness Uganda.” Book, music and lyrics by Griffin Andrews and Matt Gould. Directed by Diane Paulus. Choreography by Darrell Grand Moultrie. Set Design by Tom Pye. Costumes by Esosa. Lighting design by Maruti Evans. Sound design by Jonathan Deans. Project Design by Peter Nigrini. http://www.amrepertorytheater.org.