BOSTON — The winter of our discontent because of the endless bad weather has also become a winter of strong revivals of the Russian writer Anton Chekhov’s work.
So the Huntington Theatre Company’s sparkling production of “The Seagull” now at the BU Theatre follows closely on the heels of Actors Shakespeare Project’s sterling production of “The Cherry Orchard.”
But Chekhov’s prose never sang to me the way it does in this production of “The Seagull,” with a cast led by the redoubtable Kate Burton, her son Morgan Ritchie, and including such Boston-area stalwarts as Thomas Derrah, Nancy E. Carroll and Nael Nacer, all of whom deliver fine supporting performances.
Everyone is pitch-perfect here, and Huntington Artistic Director Peter DuBois was fortunate to have had Director Maria Aitken to step in when Nicholas Martin had to bow out for personal reasons. 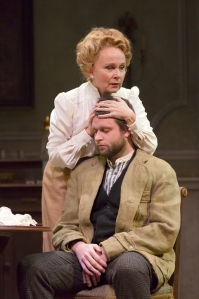 There are many reasons you could see this production, and one key one is Paul Schmidt’s 1997 translation that mines every ounce of humor from the characters and their situations before the situation takes such a dark turn in the final act.
And, yes, it has become almost a cliché to note the Huntington’s attention to detail when it comes to the areas of sets, costumes, props and lighting, and hopefully theater-goers — and reviewers — don’t take for granted the work done in creating an atmosphere where the production can succeed.
In this case, both set designer Ralph Funicello and costume designer Robert Morgan were both part of 2007’s Huntington production of “The Cherry Orchard” and they brought that experience of working together on various projects to this production.
To wit, in Act One Funicello’s lovely Russian estate festooned with birch trees, and his magnificent drawing room that is the setting for Acts 2-4 give the production a strong feel for time and place that lend an air of authenticity.
Sorin (Thomas Derrah) is the owner of the country estate, a retired bureaucrat in failing health and the brother of the vainglorious actress Irina Arkadina (Burton).
She struggles to hold onto her career, her lover Tigorin (Ted Koch) and is unable to comprehend the despair of her brooding son Konstantin Treplev, played by her real-life son Morgan Ritchie, who is bound and determined to reform a theater scene “tired and restrictive.”
When he stages a new work outdoors on his uncle’s estate that is head-scratching, the reaction and the blowback on him unbearable for the troubled young man.
“There should be new forms of theater or no theater at all,” he declares, hardly winning over his mother and the others with his stance. His rejection will lead to no good for anyone.
As with other Chekhov works, romance is afoot and the relationships are tangled. Let’s see: the teacher Medevenko (Nacer) loves Masha (Meredith Holzman), who only has eyes for Konstantin, who loves Nina.
Auden Thornton infuses Nina with such spirit and life that it is hard to see how any man could resist her, and indeed Ted Koch’s Tigorin, a well-known writer and Irina’s lover, is bowled over by her boldness and her gift of a medallion that includes a telling description from one of his books.
Nina is enthralled with the writer and dreams of becoming an actress, a dream that will come true — to a degree.
But in Chekhov’s world, happiness is a fleeting emotion, never fully realized and quickly discarded when it does show up.
By Act IV, everything and everyone will have changed — not for the better.
There is a certain segment of theater-goers who will be attracted to this show by the star power of the Burton family, and that’s fine. But this production of “The Seagull” is a testament to the power of Chekhov’s words, the ensemble, and a cast that has found its way to the essence of their characters.
The Huntington Theatre Company production of Anton Chekhov’s “The Seagull.” Translated by Paul Schmidt. Directed by Maria Aitken. Set design Ralph Funicello. Costumes by Robert Morgan. Lights by James F. Ingalls. Sound by Drew Levy, Original music by Mark Bennett. Through April 6 at the BU Theatre. Huntingtontheatre.org