New Rep’s ‘In Between’ is food for the soul 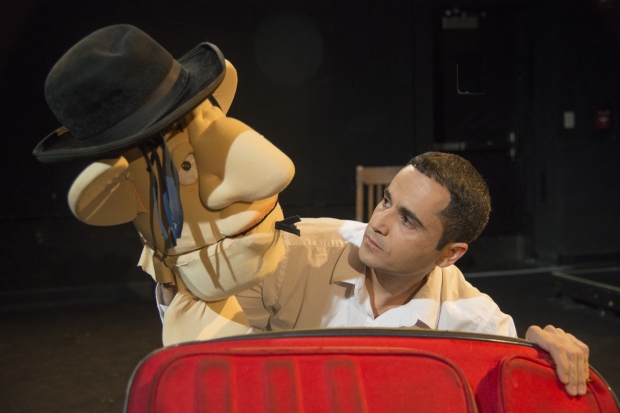 WATERTOWN — Depending on how you look at it, he is a man with two countries, or a man with no country.
Playwright and performer Ibrahim Miari uses very personal experiences in his solo performance in “In Between,” a play now being performed at the Arsenal Center for the Arts as part of the New Repertory Theatre’s ongoing Black Box Festival.
Miari wrote and performs the piece, which details his life spent with one foot in Palestine, the other in Israel.
Miari, who grew up in Akko, Israel, is the son of a Palestinian-Muslim father and a Jewish-Israeli mother. He is an engaging, pleasant sort edge, and for the most part the piece reflects his personality.
But there are other moments that reflect tension in living in an area of the world that has known little peace for many years.
For instance, while he carries an Israeli passport, it doesn’t protect him from being scrutinized at the airport by an El Al security guard, a harrowing scene complete with a latex glove for searching you know where, a scene that reminds us that while he may live in Israel, he is not regarded as one of us in many eyes.
But there are lighter moments, too, funny stories of how Ibrahim suddenly becomes Abraham when it comes to the Jewish school he attends.
He finds several expressive and entertaining ways to tell his tale of his relationship with an American Jewish girl, Sarah Goldberg, whom he met when both were counselors at an Israel-Palestinian “peace camp” in Canada.
She explains to her parents “I have met someone. His mother is Jewish!” before giving her parents, as the late newscaster Paul Harvey used to say , “the rest of the story.”
Miari becomes Sarah’s mother, promising to give the couple her blessing if they’ll be married by her rabbi.
Miari uses a prop — a huge puppet of a rabbi — to depict the negotiations between the couple and the various clergy the couple consult while deciding to decide if they will marry in a Jewish ceremony, an Arabic one, a Buddhist one, or none of the above.
The rabbi says he doesn’t need wine — Muslims don’t drink alcohol — but the food has to be kosher and. oh, have they thought about raising the children Jewish?
The rabbi rejects them when they don’t appear to be going along with the entire program.
“I just don’t emcee weddings,” he says.
More problems arise when the couple consider an Arabic or Buddhist ceremony.
Perhaps things went a little smoother in the case of Miari’s parents, since his Jewish mother converted to Islam and he was raised a Muslim.
But he has fond memories of spending Jewish holidays with his Jewish grandparents in Tel Aviv, and he is proud that he is able to find numerous things on both sides of his heritage to connect with.
At one point, Miari explains that his Palestinian grandmother’s name, Nijmi, means “star,” as does his Jewish grandmother’s name, Esther.
Neither one had the chance to meet the other, but he imagines that they would be able to find common ground in the marriage of their grandchildren.
At the end of the piece, you might believe Ibrahim is still finding out who he is and where he belongs. His “In Between” is food for the soul generously leavened with humor, a heartfelt, entertaining piece about what it means to be caught up in and between two cultures.
“In Between,” written and performed by Ibrahim Miari. Staged by the New Rep Theatre in the Black Box Theater, Arsenal Center for the Arts, Watertown, MA, through April 20. http://www.newrep.org.