There’s plenty of fun in funky ‘Measure for Measure’ 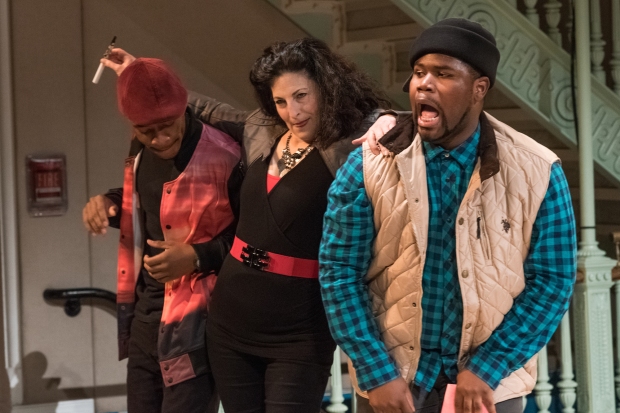 CAMBRIDGE — Actors Shakespeare Project fears no piece in The Bard‘s canon, even works not often performed because they have been designated one of Shakespeare‘s “problem plays.”
That would include “Measure for Measure,” now being performed by ASP through Feb. 1 at the Multicultural Arts Center.
It’s hard to know which shelf which shelf it belongs on. Is it comedy? Plenty of comedic moments and comical, clown-like characters, but not really. Is it drama? There are moments of dramatic tension, and dramatic events, but the mood is just too lighthearted much of the time.
Tragedy? No chance. In the end, there is no tragic ending; instead, it has the distinct feeling of the title of another of the so-called “problem plays“: “All’s Well That Ends Well..” 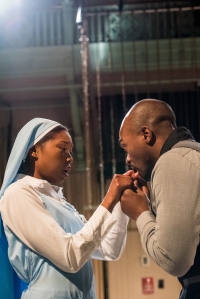 Shakespeare set the piece in Vienna centuries ago, but ASP’s Vienna is presented as a mid-20th Century city that has real issues when it comes to law and order.
Duke Vincentio (Michael Forden Walker), perhaps suffering from some personal demons that will require some time off at a peaceful setting, is having a rough time of it keeping law and order, and hands over the reins to the city to his faithful deputy, Angelo, played by Maurice Emmanuel Parent, one of the Boston area’s most versatile and consistently excellent performers.
Angelo, aided by sidekick Escalus (Thomas Grenon), decides he will bring the hammer down on the rampant immorality, banishing whorehouses but also strictly enforcing the laws against fornication up to the letter of the law, including punishing those guilty by death.
That puts Claudio (Jared Michael Brown) clearly in his crosshairs, as he has made his girlfriend and intended bride Juliet (Lydia Barnett-Mulligan) pregnant before they have officially tied the knot. Claudio finds himself condemned to death.
Angelo’s sudden absolute power corrupts him absolutely, to the point where he discards his betrothed Mariana (Sarah Newhouse, wonderful in recent “Comedy of Errors”) as he lusts after the novice nun Isabella (Adrianna Mitchell), who has come to him to plead for mercy and her brother’s life.
He extorts her sexually, promising to free her brother if she gives up her virginity to him.
She refuses at first, but then agrees, but Friar Peter (Brown) is afoot and is part of the scheme that will see Angelo conjoined with Mariana instead of Isabella.
There is fun to be had in ASP’s choices in updating the piece and giving it a street-smart, hip-hop sensibility, especially when it comes to the costumes designed by Miranda Kau Giurleo.
Then there’s the broad Boston accents employed by Barnett-Mulligan as the pimp Pompey Bum, who works for the bawdy madam Mistress Overdone (Sarah Newhouse). Barnett-Mulligan has yet another fine comic turn as the woebegone executioner Abhorson. Newhouse — so wonderful in last fall’s “Comedy of Errors” — also scores as the officious, efficient Provost, keeper of the prison.
The irrepressible Johnnie McQuarley portrays three different — but all funny — ne’er-do-wells, including the Jamaican-themed Barnadine, whose refusal to go along with the Duke’s scheme to save Claudio’s complicates matters.
Shakespeare ties up all the various plot lines in one fell swoop, in an rather unwieldy final scene that resembles the final minutes of an old episode of “Murder, She Wrote.”
Most of the play’s action takes place in the center of the high-ceilinged room at the Cambridge Multicultural Arts Center, a former courtroom in what was once the Middlesex County Courthouse, an ornate building with its tall shuttered windows and marble floors.
The audience sits on two sides facing each other, and action also occurs on a balcony/catwalk level that rings the room, or on a stairway that leads up to the room or connects the room and the catwalk above.
Set designer Megan F. Kinneen built a cleverly constructed jail cell consisting of a moveable metal screen. Sound designer David Reiffel’s incidental music hits the right chord every time.
The piece flows beautifully, and director Megan Sandberg-Zakian’s decision to set it  in the present time is rooted in the belief that the hypocrisy, corruption and unfairness that dogged our institutions centuries ago continues to dog us as a civilization.
“Measure for Measure” isn’t a “problem play” for the audience that will find a plethora of smiles and chuckles, and a chance to enjoy some excellent actors portraying fun, funky characters in an entertaining two-hour ride.
“Measure for Measure” by William Shakespeare. Directed by Megan Sandberg-Zakian. Presented by Actors’ Shakespeare Project, at the Multicultural Arts Center in Cambridge, MA., through February 1. http://www.actorsshakespeareproject.org

← ‘Bedlam’s Saint Joan’: An army of four shines
There’s not enough there there in ‘Middletown’ →