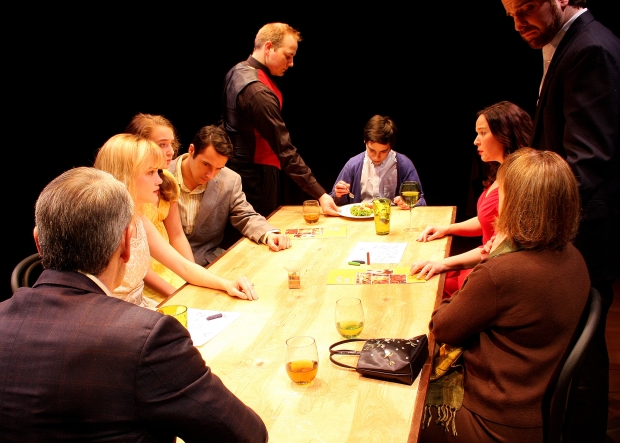 BOSTON — Large themes are played out around the tables of unnamed restaurants in the Midwest in Dan LeFranc’s “The Big Meal,” a Zeitgeist Stage production now at the Black Box Theatre of the Boston Center for the Arts through March 7.

By the nature of the story, LeFranc’s “The Big Meal” owes something toThornton Wilder’s “The Long Christmas Dinner” and A.R. Gurney’s “The Dining Room,” two other theatrical pieces where families gathered to eat and, at times, wage war.
The 2011 work is a kind of Marine boot camp for actors. They will quickly slip in and out of the action playing different characters in the story and Zeitgeist Artistic Director David J. Miller, who directs here, had to use an eight-column spreadsheet showing the overlapping lines of the eight different characters and a silent but very effective waiter (Josh Clary).

Devon Scalisi and Becca A. Lewis in Zeitgeist Stage Company’s production of The Big Meal.  (Photo by Richard Hall/Silverline Images.)

There are complicated cues, much like a Sondheim musical that features a surfeit of overlapping voices.
White the actors and actresses have to be on their toes, so does the audience, because “The Big Meal” moves with the speed of light, as characters appear, and sometimes suddenly disappear for good. That process thankfully follows a certain ritual, so you know exactly who is headed for the last roundup shortly after it happens.
LeFranc eases the pain by having each character introduce himself or herself whenever there is one of the myriad time changes.
LeFranc builds “The Big Meal“ course by course, starting with the first chance encounter between young Sam and young Nicole, when Nicole informs Sam she is on the rebound, not really looking for any kind of real relationship and definitely not meeting any parents or having kids.
They jump into bed right away, of course, and what ensues is all of the above, of course, as well as courtships, weddings, births, deaths, despair, all amidst the calamari, enchiladas and “Cadillac Margaritas.”
Ashley Risteen and Johnny Quinones are the younger couple, an attractive pair, and Risteen is especially effective as Stephanie, a perky girlfriend, later bride who is sadly destined to fall by the wayside.
Becca Lewis and Devon Scalisi are very strong as the slightly older pair, constantly being buffeted about by the winds of change in the family situations, and standing strong in their love.
Two accomplished young actors, Arianna Reith and Alec Shiman, are periodically thrown into the fray to portray children of all sorts and ages, and they are up to the task of being in the right place at the right time on the constantly changing landscape.
Zeitgeist regulars Peter Brown and Shelley Brown portray older characters, with Peter doing some amusing work, especially as an impolitic father and father-in-law, and then later touchingly playing Sam as an elderly grandfather who has to be spoon-fed. Shelley shines in a series of mother figures and as a caring matriarch, and finally a doting great-grandmother.
“The Big Meal” will eventually be served through four generations and 60 years or so of time, even though what the characters are doing and how they’re doing it don’t seem to change that much through the years — only the disagreements and divorces are different.

The biggest problem when you shuffle the deck every few minutes is that you don’t really get to know the characters as well as you‘d like to.
Despite deaths, divorces, and illness, life goes on, and while there’s heavy-duty squabbling, it isn’t always inspired squabbling.
Different? To be sure. Gimmicky? Maybe, but the direction and the performances are true, and if it is a fancy theatrical juggling act, the juggling is done quite well, and the result is satisfying, just like a big meal should be.
The Zeitgeist Theatre Company production of Dan LeFranc’s “The Big Meal.” Directed by David J. Miller. Sound design by J Jumbelic. Costumes by Elizabeth Cole Sheehan Lighting by Michael Clark Wonson. At the Black Box Theatre at the Boston Center for the Arts through March 7. http://www.zeitgeiststage.com