NSMT’s ‘Billy Elliot’ will steal your heart away 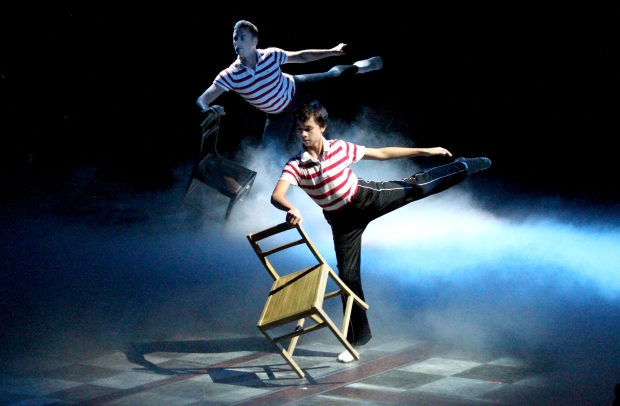 BEVERLY – “Billy Elliot” is a musical that wears its heart on its sleeve. That calls for an extra-large shirt, because “Billy Elliot” has a big heart.

The story of a widowed coal miner’s son in northern England who wants to spend his life dancing, not mining, is set against the backdrop of the coal miners strike of 1984, which idled 200,000 coal miners as they battled the government of then- Prime Minster Margaret Thatcher.

“Billy Elliot” gets its biggest boost not from the score by Lee Hall and Elton John, but Hall’s witty, touching book, based on the 2000 Universal Studios/Canal Films movie. Hall manages to win us over without ever crossing over the line into schmaltz.

Truth be told, this isn’t John’s best theatrical work as a composer, but it does serve the basic function of moving the storyline along and there are several highlights, such as the catchy production numbers “Solidarity” and “Merry Christmas, Maggie Thatcher” and the heart-rending “”Dear Billy,” sung to Billy by his mother (Elysia Jordan), and its second-act reprise, which is Billy’s reply.

The show will have you rooting not only for Billy, played by either Nicholas Dantes or Brooks Landegger, but the downtrodden coal miners trying to eke out an existence. Dantes, at Wednesday’s performance, wasn’t as fiery as some of the Billys I’ve seen but he captures the emotions of the role and handles the dance requirements  beautifully. 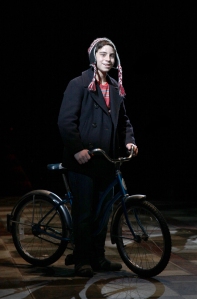 He heads a whole cast of characters who are slightly “off,” including local favorite Sarah DeLima, enjoying a fine comic turn as Granma, widowed after a long, less than ideal marriage that nevertheless had its moments, as she sings in her “We’d Go Dancing.”

Timothy Gulan’s Dad has been going through the motions of life since the death of his wife, and the impending strike has dragged him further down into the abyss. Oldest son Tony (C.J. Eldred), who has joined his father in the mines, is a firebrand in the miners’ union, determined that he will fight for his future.

Janet Dickinson portrayed Mrs. Wilkinson in the first national tour of “Billy Elliot” that played Boston and she lends the just touches to the chain-smoking, seemingly hard-edged dance teacher who ultimately proves to be a softie with a heart of gold, giving Billy a chance to escape from the dying coal town.

Some actors are born to steal scenes, and Brookline’s Alec Shiman has been doing it for years now.

He been a constant presence at the IRNE Awards – nominated four times in the category of Most Promising Young Performer – since playing Dill in Boston Children’s Theatre’s “To Kill a Mockingbird.”

His good-hearted, cross-dressing Michael is a comic delight as he longs to don the tutu worn by the female dancers in Billy’s class. He is a steadfast supporter of Billy’s dream and a follower of the show’s central theme: Be true to yourself, and you’ll be happy.

Danny Rutigliano makes the most of George, the acid-tongued boxing coach who despairs of teaching Billy the Sweet Science,

As Mr. Braithwaite, Mrs. Wilkinson’s beer-swigging accompanist/assistant, Brian Padgett shows in “Born to Boogie,” that you should never makes assumptions about someone on based on their appearance.

Director/choreographer Adam Pelty scores twice, first with his brisk, en pointe direction that moves the action nimbly along, and as a choreographer, especially in assembling and training the young “Ballet Girls,” the young ladies in Mrs. Wilkinson’s class, and working with such a large ensemble. If you’re wondering where your ticket money is going, there’s a cast of 32 on stage.

Stay in your seats after the curtain call for a rather spectacular encore, a dancing treat involving the entire company and the skills of choreographer Pelty.

This isn’t really a children’s show a la the recent “Shrek” – there’s some strong, salty language — but kids 10 and above should be just fine.

“Billy Elliot” reminds us all once again to follow our heart, wherever it may take us. It is a celebration of life, artfully staged, directed, acted and sung, all at once exciting, funny and heart-rending.