CHARLESTOWN – Clowns are pretty interesting characters, but they’re not for everyone.

In my 20 years working at the old Boston Garden, I probably saw 300 performances of the Ringling Brothers Barnum & Bailey Circus, and I saw firsthand how some folks can react when face to face to the guy with the big red nose.

Who’s hiding behind that makeup and huge shoes? Is that whiteface and red nose just a cover for criminal behavior?

If you suffer from coulrophobia – a fear of clowns – you’ll realize your worst dreams in Theatre on Fire’s production of Adam Szymkowicz ‘s “Clown Bar” at the Charlestown Working Theatre. 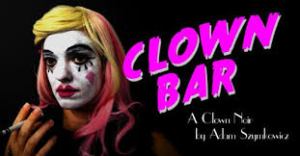 The theater has been transformed for this production into a cabaret setting with cocktail tables and a working bar where you can buy a drink before the show.

“Clown Bar” takes its cue from the campy film noirs of the 1930s and 1940s and the melodramatic themes of those films.

The characters are clowns who happen to be not only clowns but prostitutes, gangsters, hit men, junkies and yes – cabaret singers – and it is disquieting at times, to say the least. Just so the patrons fit in, a free clown nose is distributed to all attending.

Everybody has to be all in and on the same page for it to work – delivering the lines, being part of the sight gags, etc. — and Director Darren Evans and his cast have a firm grip on what playwright Szymkowicz is striving for.

Happy Mahoney (Christopher Sherwood Davis) – the name drips with irony – is a former clown, now a hard-boiled cop, whop ventures into the clown bar to investigate the killing of his younger brother Timmy ( Macmillan Leslie). Timmy, it turns out, happened to be the rarest of beasts – a clown who isn’t funny – and his life devolved into the world of drugs and crime while he “waited to get funny.”

Davis gets the mannerisms, voice and cadence of the character just right.

A working girl with a heart of gold, Petunia (Annie Hochheiser ) is willing to service Happy “on the house” but he’s looking only for information and only has eyes – and other body parts – for his former flame, the sultry Blinky Fatale (Emma Goodman). Their steamy sex scene behind the bar is a hoot.

To get to Timmy’s killer, Happy must confront Jeff Gill as the maniacal clown boss Bobo.

Dusty the Clown (Chris Wagner) warms up the crowd with some clown-related cabaret tunes, but he’ll be a target both early and late. Joining in on the fun are Craig Houk as Twinkles, Chelsea Ruscio as Popo, Terry Torres as Shotgun and Marcus Hunter as Giggles..

The bodies start piling up about midway through the 75-minute play, which also features a plethora of sight gags and clownery – the never-ending tie was my favorite.

“Clown Bar” never takes itself too seriously, except when it comes to making us laugh. And if you indeed suffer from coulrophobia – be careful when you step into “Clown Bar,” because all your worst dreams will come true.