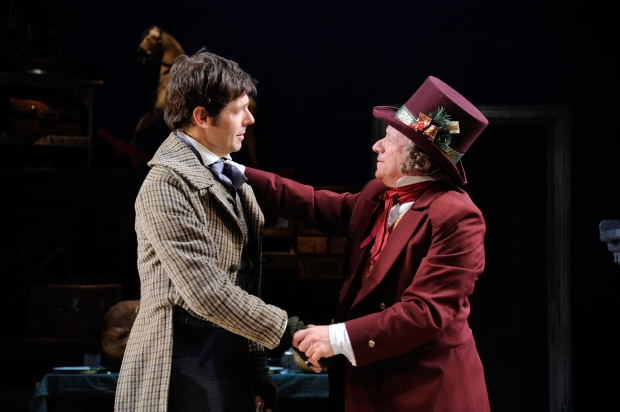 PROVIDENCE – A decade is a nice run. After twenty years, you can certainly be called a tradition. After 38 years, you’ve probably earned the right to be called a holiday institution.

Trinity Repertory Company unveiled its 38th annual production of Charles Dickens’ “A Christmas Carol” this week, giving the Christmas season a kickstart even before the first turkey met its fate.

The production, directed by Trinity Artistic Director Curt Columbus, which opened on Nov. 7 and will run through Dec. 31 at the Chace Theatre. is a sprightly, artistic delight, a delightful bauble under your theatrical Christmas tree.

The test of an Ebenezer Scrooge is how well he makes the transformation from miserly misfit to Christmas crazy, and Stephen Berenson’s Scrooge redemption is both funny and heart-warming.

You can count on Fred Sullivan Jr. to find the humor in the role, which he does as a feisty, funny Mr. Fezziwig and later as Old Joe, the “secondhand dealer” who bargains over Scrooge’s effects.

Joshua Lemeli and Adriana Blount are engaging as the Young Scrooge and fiancee Belle. 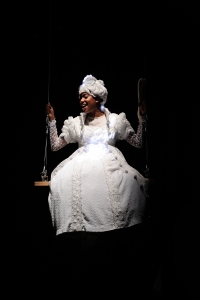 The production features alternating Red and Green casts of children, and the Red team – Gustavo Londono, Calista Heart Auinaldo, Amaryllis Miller, Bobby Miller III, Delaney Wilson and Damola Abedayo – were strong across the board at a recent performance.

This year’s production is dedicated to Barbara Meek, a longtime member of Trinity Rep who died on Oct. 3, who performed in 14 “Carols” and once in 1998 authored her own Ebenezer Scrooge on the Trinity stage.

Setting the stage for a period piece such as this one set in 1843 London are Toni Spadafora’s sumptuous costumes, lively, lovely projections by Aaron Rhyne and John Narun, Josh Epstein’s lighting design and sound design by Peter Sasha Hurowitz.

Columbus’ direction is caring and complete. It is obvious he gets involved in the little details of the production that add to the whole of the theatrical experience.

Even amidst the lights, the bustle and the gifts, the holiday season is difficult for many people.

Just as Scrooge was transformed, it’s likely this production will transform you a bit, too, whether you’re a child aged 8 or 80, and send you into the night with a smile on your face and in the spirit of goodwill to others.

← The Bard, Britten bend to will of Isango Ensemble
‘Elf” has its moments, but not enough of them →