‘Elf” has its moments, but not enough of them 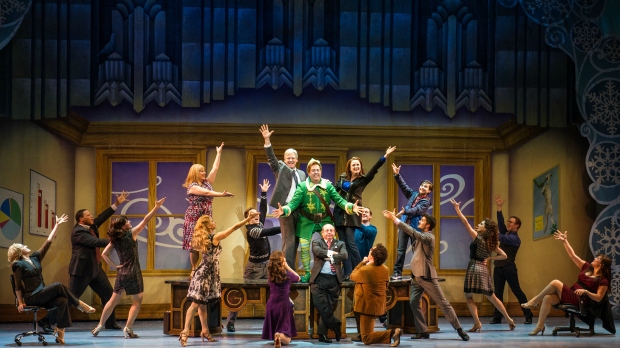 Eric Petersen, center, and The Company in a scene from “Elf” at the Wang Theatre. Photo by Amy Boyle

BOSTON – “Elf: The Broadway Musical,” like Buddy The Elf himself, desperately wants to be liked.

It dances and sings its heart out on the stage of the Citi Performing Arts Center’s Wang Theatre.

Unfortunately, a sagging score by composer Matthew Sklar and lyricist Chad Beguelin prevents the show from ever really taking off, although there are likable moments to be sure, especially in a second act that’s more appealing by a wide margin.

Eric Petersen has the requisite outsized personality and uber-goofiness to play Buddy The Elf, and even though he goes so far as to almost fall off the cliff, there are some inspired moments for him and an engaging, talented cast that is not short on energy and enthusiasm.

Alas, for most of the night the show never really takes off and soars, and again  most of the blame lands at the feet of composer Sklar and lyricist Beguelin.

Book writers Thomas Meehan and Bob Martin have borrowed some of the elements of the hit 2003 New Line Cinema film written by David Berenbaum. and sprinkled in some funny bon mots.“My brother-in-law owns a Taco Belle in Boca,” muses Santa Claus (JB Adams) as he mulls retirement. Santa no longer uses reindeer – “those PETA complaints,” don’t you know.

Buddy The Elf crawled as a baby into Santa’s bag one Christmas and grew up at the North Pole, noticeably bigger than the other elves and a pretty poor toymaker to boot.

There’s a dance number where the actors portraying elves do a dance on their kneepads that– ouch – mostly looks awkward and uncomfortable.

Santa decides it’s time that Buddy know the truth about his origins — that he’s a human named Buddy Hobbs and that he actually has a living, breathing father in New York City, a besieged book editor named Walter Hobbs (Tom Galantich)

Stepbrother Michael (Joshua Colley) and stepmom Emily (Christiane Noll) – the two best voices in the production — take to Buddy pretty well and his goofiness, quirks and hugs but he eventually wears out his welcome and is banished from the Hobbs home as Christmas approaches. Meanwhile, Walter faces a daunting deadline to produce a holiday book idea – or else.

The second act does show signs of life, especially when a collection of disillusioned department store Santas gather together with Buddy at a Chinese restaurant on Christmas Eve, dancing up a storm as they agree “Nobody Cares About Santa.”

Boston Conservatory grad Veronica J. Kuehn does a nice job as Buddy’s love interest Jovie and gets a chance to perform one of the better tunes, “Never Fall in Love.”

“Elf The Musical” tries really hard and again has some inspired moments, but they are sporadic and not sustained. If Buddy The Elf is your thing, well, go for it.

The Citi Performing Arts Center and MSG Entertainment production of “Elf: The Broadway Musical.” Book by Thomas Meehan and Bob Martin. Music by Matthew Sklar and Chad Beguelin. Directed by Sam Scalamoni. Choreography by Connor Gallagher. At the City Performing Arts Centre through Dec. 6. Tickets are on sale at the Citi Center box office, through http://www.citicenter.org or by calling 800-982-ARTS (2787), or through Ticketmaster.