‘Violet’: One woman’s ride towards redemption 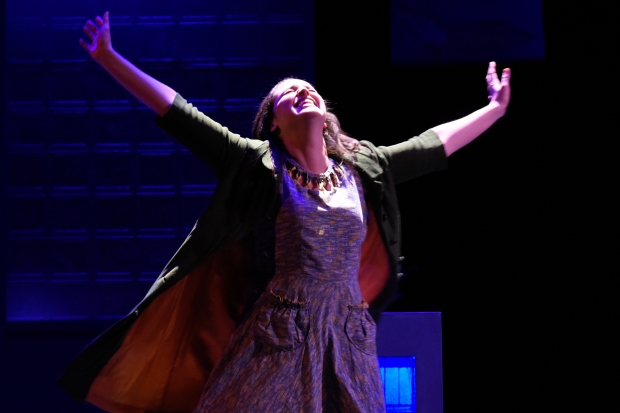 BOSTON – The title character in the musical “Violet” is hopeful that at the end of a long bus ride she will find hope, healing and redemption.

The musical based on the short story “The Ugliest Pilgrim” by Doris Betts, which was later made into an Oscar-winning short film, is a feel-good story about a young woman’s desire to find a person who can heal a scar, a wizard of sorts who waits at the end of a bus trip from Spruce Pine, North Carolina to Tulsa, Oklahoma.

The Speakeasy Stage Company actually performed an earlier off-Broadway version of the show in 2000; this production is the Broadway adaptation that starred Sutton Foster and earned a 2014 Tony nomination as Best Musical Revival.

“Violet” is the kind of show that might not work well if Director Paul Daigneault hadn’t cast it as adroitly as he did. Remembering her searing performance in the Speakeasy production of “Bad Jews” in 2014, he cast Alison McCartan as Violet in a vastly different sort of role, but she delivers again.

Violet is sure a TV preacher in Tulsa will be able to heal the scar she suffered in an accident involving her father and an ax when she was just 13. Because of her scar, Violet lacks confidence – because she doesn’t feel beautiful on the outside, she doesn’t feel beautiful on the inside, either. But that doesn’t stop her from saying goodbye to her dead-end boyfriend Leroy (Patrick Greeley) on September 4, 1964 and jumping on that bus, bound for the unknown. 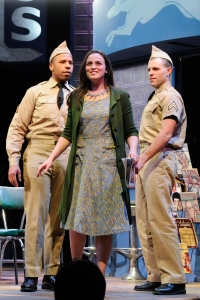 Along the way she will meet two soldiers: Monty, a self-assured, preening type (Nile Scott Hawver) and Flick (Dan Belnavis), a black man very much aware that being a soldier doesn’t give him any special status in the segregated South in 1964. Belnavis’ sturdy singing voice makes the number “Let It Sing” one of the vocal highlights.

The soldiers woo her, each in his own way, one overtly and one much more subtly.

This adaptation made the decision not to use makeup to portray Violet’s scar, relying on the reactions of those around her – many turning away in horror – to make the point . It was a method used successfully in stage productions of “The Elephant Man,” relying on the actor to paint the picture of the disfigured John Merrick.

“Violet” overflows with fine supporting performances. Daigneault coaxes a marvelous performance out of 12-year-old Audree Hedequist, who give a confident, assured portrayal of a young Violet, with an equally confident and assured singing voice.

John F. King does yeoman’s work in a variety of roles, but especially as a bus driver and as the slick TV preacher/huckster whom Violet confronts.

Kathy St. George’s acting range is A to Z, and here she is a wizened older woman who befriends Violet and a prostitute in a Memphis hotel.

Carolyn Saxon shines as the landlady of a Memphis rooming house where Violet and the soldiers find refuge and as a gospel singer who raises the roof with a rousing “Raise Me Up,” aided by a group of local gospel singers; singers from several area churches will rotate throughout the run of the show.

Michael Mendiola is steady if a bit understated as Violet’s guilt-ridden father, doing his best to raise his daughter after his wife’s death.

The score by Jeanine Tesori (music) and Brian Crawley (lyrics, also wrote the book) is true to the Southern roots of the story, a pleasant blend of country, rhythm & blues and a generous helping of gospel, as befits a journey that makes its way through Memphis and Nashville on the way to Tulsa.

The orchestra led by Matthew Stern moves keenly among the genres, providing a solid backing.

The production team is top-notch, especially Eric Levenson’s set and Charles Schoonmaker’s costumes, which are period-perfect.

Through it all, McCartan as Violet is driven and undaunted, and the choices she makes at the end of her journey are meant to show that healing isn’t just physical, but emotional, too. “Violet” is an inspirational ride with some unforgettable characters.

The Speakeasy Stage Company production of “Violet.” Music by Jeanine Tesori. Book and Lyrics by Brian Crawley. Directed by Paul Daigneault. Choreography by David Connolly. At the Stanford Calderwood Pavilion at the Boston Center for the Arts, Boston, through February 6. http://www.speakeasystage.com

← WRT’s ‘Blue Leaves: A comic quest for the spotlight
A life quickly unravels in Huntington’s ‘Disgraced’ →