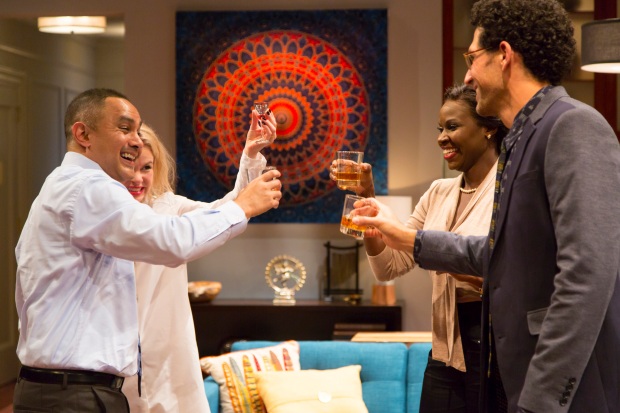 O, what a tangled web we weave when first we practise to deceive! Walter Scott

BOSTON – You can certainly put yourself in the shoes of Amir Kapoor, the lead character in the Huntington Theatre Company’s production of Ayad Akhtar’s Pulitzer Prize-winning play “Disgraced,” now at the BU Theatre through Feb. 7.

In a Post-9/11 world rife with Islamophobia, Amir (Rajesh Bose) finds it more convenient that people believe he is an Indian-American instead of a Pakistani-American.

Kapoor, in fact, doesn’t sound Muslim because it’s Indian, while Amir’s Pakistani family name Abdullah would be a strong signal: This is a Muslim, approach with caution.

Amir had to be thinking that, as a corporate lawyer climbing the ladder in New York City, not only would people accept him more easily as an Indian, but by marrying a white wife, Emily (Nicole Lawrence), who is also an artist, it would further deflect suspicion about him being a Muslim.

Albeit one who has abandoned his Islamic faith – an apostate, if you will, who, as Amir notes, is subject to execution.

There are other complications. Emily paints in the Islamic tradition and while Amir is repudiating the religion of Islam he has been brought up in, Emily supports many of the tenets of Islam. Amir counters with charged passages in the Quran and a story about his fist crush – on a Jewish girl, and his mother’s embittered reaction to it.

In his personal life, his mastery of mergers and acquisitions has led him to believe he is ready to take the next step as a full partner, ruminating how his last name will fit in with the others of different ethnic origins.

But nephew Abe Jensen (an effective Mohit Gautam) — whose former first name was Hussein and was changed for much the same reasons as his uncle – asks Amir to help the imam at his mosque, who has been imprisoned, unjustly, Abe says, charged with raising money for terrorists.

He visits the imam and later attends his court hearing, and when he says something supportive of the imam, the New York Times picks it up and runs with it, quoting him, naming his law firm, and making it look as if he is part of the imam’s legal team.

The firm’s partners start to ask questions about where Amir is actually from, and from one small thread it all begins to unravel.

Amir is at the center of what will become a scorched-earth debate about race and religion when he and his wife invite another couple over for dinner. In a dinner party that begins with Amir brimming with bonhomie, Amir and Emily are joined by art dealer friend Isaac (Benim Foster) and his African-American wife Jory (Shirine Babb), a lawyer’s in Amir’s firm who is also on the rise towards a possible partnership.

During the party and a pitched argument over race and religion, the thin veneer of friendship will be stripped away, masks will be dropped and fangs will be bared as the quartet – a Jew, a Muslim, a white woman, and an African-American – hurl accusations, secrets are revealed, and the unthinkable happens.

“Disgraced” will leave you both shaken and stirred, lost in a cauldron of emotions, aghast at how the anger and resentment of one person – standing in place for an entire aggrieved group of people – can leave relationships destroyed in their wake.

← ‘Violet’: One woman’s ride towards redemption
Sondheim upstages cast in ‘Sondheim on Sondheim’ →