‘Historia de Amor’ is both beautiful and ugly 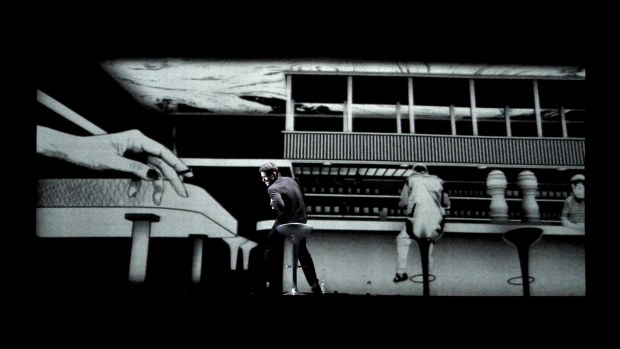 BOSTON – How can something be both simultaneously beautiful and ugly?

It’s when the beauty of a new theatrical technique that seamlessly combines film and animation with live acting is contrasted against the ugliness of the story the actors are portraying.

“Historia De Amor,” currently being presented by ArtsEmerson in a short run at the Cutler Majestic Theatrer that ends Sunday, April 24, employs groundbreaking techniques to integrate live actors into film and animation, with stunning results.

The acclaimed Chilean troupe Teatrocinema uses two screens — a translucent scrim at the apron, another just behind the stage– to create both 2D and 3D effects to bring a graphic novel to life on the stage.

The technique requires split-second precision by actors Julian Marras and Bernardita Montero – with a brief but important appearance by Stage Manager Daniel Figueroa – in the 100-minute production with no intermission, in Spanish with English subtitles.

The actors integrate themselves seamlessly into the animated backgrounds and foregrounds., sometime behind them and other times in front, depending on which screen is being used.

Elements of “Historia de Amor” can be seen in the traditional film noir, and the black and white graphic novel style recalls Frank Miller’s “Sin City” graphic novels that were made into a series of movies. And even the dialogue balloons and graphically enhanced sound effects such as “Pow” and “Bam” were part of the old “Batman” TV series with Adam West.

But never were the elements combined in such a way before.

While “Historia de Amor” translates into “Love Story,” it isn’t a love story. Quite the opposite.

Based on French writer Régis Jauffret’s graphic novel, it is a very intense, psycho-sexual treatise about an unnamed English teacher’s obsession with a woman named Sofia that plays itself out over many years.

It includes a scene of rape, followed by prison time as the teacher spirals ever downward, falling back only to return to terrorize her again and again. He is the only one who speaks. Sofia never does, the starkest symbol of his tyrannical dominance. He eventually isolates her from family as a way of leaving her no other option or way out.

In a performance on Thursday, director Juan Carlos Zagal performed live the evocative score he wrote to accompany the piece and ramps up its intensity, and Matias Del Pozzo’s sound design is a pitch-perfect accompaniment to the visual spectacle.

It is beautiful to behold, even if the story that unfolds on stage is, again, quite ugly and recommended for mature audiences.

A raft ot technicians and designers have all combined talents to bring “Historia de Amor” to the stage , and the resulting haunting images will stay with you.

← Lyric’s ‘Mr. Burns’: Discomfort without the payoff
MRT’s ‘Home of the Brave’ veers off the rails →