‘Oklahoma!’ is a bright, bold re-telling of classic 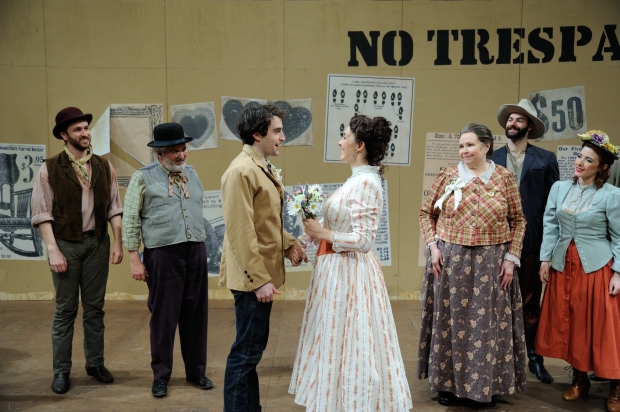 Charlie Thurston as Curly and Rachael Warren as Laurey (center) with the cast of Rodgers & Hammerstein’s Oklahoma! directed and choreographed by Richard and Sharon Jenkins at Trinity Rep. Set and lighting design by Eugene Lee and costume design by Toni Spadafora. Photo Mark Turek.

The exclamation point really belongs in the title of the musical this time, with the reimagining that scaled back the show in some areas while immersing the audience ever more deeply in its basic elements, helping them to realize all over again how brilliant those elements are.

“Oklahoma!” takes place outside a town named Claremore in the Oklahoma Territory in 1906, on the eve of the territory becoming a state.

Nonpareil designer Eugene Lee eschews the conventional sets or painted flats of past productions in favor of a minimalist design – a large open space that looks like a site under construction with OKLAHOMA TERRITORY (NO TRESPASSING!) in big, bold type on a backdrop festooned with posters and fliers for goods and services appropriate for the time.

The strings of lights that augment the theatrical lighting suggest an outdoor celebration. This more intimate “Oklahoma!” puts the attention back where it belongs – the actors and their characters, the witty book by Oscar Hammerstein II and the score by Richard Rodgers and Hammerstein.

Four platforms built in and among the tiered seating areas of the Chace Theartre and above, both stage left and stage right, provide areas from where actors can move quickly up and down the aisles or watch as the action unfolds beneath them. 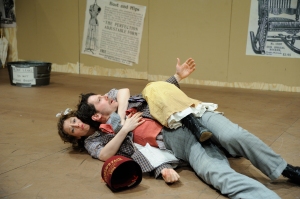 The effect is both immersive and intimate, with characters engaging with patrons in the front rows; Lee will also have a scenic surprise for us late in the piece.

The work of a seven-person orchestra led by keyboardist Michael Rice perched high above stage right does justice to the gorgeous Rodgers & Hammerstein score, much of which was revised and rewritten in the beautiful Ladies Lounge of the Colonial Theatre in Boston during an out-of-town tryout when the play was then known as “Green Grow the Lilacs,” named for the Lynn Riggs play the musical is based on.

The songs – staples of the American musical theater canon since the show’s Broadway debut in 1943 – roll off the R&H assembly line, including “Oh, What a Beautiful Mornin’” “The Surrey with the Fringe on Top,” “Kansas City,” “People Will Say We’re in Love” and the title tune.

The production numbers are smartly staged – especially the second-act “The Farmer and the Cowman” — by a sterling, energetic ensemble with the choreography by Sharon Jenkins and the original Agnes deMille dances, although it seems the ballet dream sequence may have wisely been shortened.

There’s nary a weak link in the cast, but some of the finer performances come in the supporting roles, most especially Rebecca Gibel as Ado Annie Carnes, a free-spirited young woman who believes love makes the world go around – and she aims to make the world go around.

She’s being pursued by a young cowboy named Will Parker (Jude Sandy), who aims to buy Annie’s hand in marriage by using the $50 he earned at a rodeo in Kansas City to convince Annie’s shotgun-toting dad, Andrew Carnes (Tom Gleadow), of his honest intentions.

Annie’s fallback plan when things go awry is Ali Hakim (Stephen Thorne) an itinerant “Persian” peddler, a callow traveling salesman interested in what Annie may have to offer but in avoiding commitment – and Andrew Carnes’ shotgun – at all costs The triumvirate simply steal every scene they’re allowed to come in contact with.

Janice Duclos’ Aunt Eller is the tough-but-warmhearted matriarch of the ranch. Rachael Warren’s Laurey is spunky and tough, a woman but used to carving her own path in a man’s world, while Charlie Thurston’s Curly is right purty, but tough enough to confront Joe Wilson Jr. as a chilling, menacing, harrowing farmhand Judd Fry, his isolation and resentment growing by the minute to a simmering anger ready to explode in a crackerjack take of “Lonely Room.”

With the minimalist scenic design, there’s a lot of attention on Toni Spadafora’s en pointe costumes, with program credit given to assistance from the URI Theater Department’s Costume Department.

Actors and actresses sometimes convey how they feel about what they’re doing with a subtle body language, and the cast of “Oklahoma!” is having a ball.

And it is a tribute to the directors and the cast that, at the end of almost three hours of musical theater – and Oklahoma has officially been welcomed into the Union – that we’re left wanting more.

The Trinity Repertory Company production of Rodgers & Hammerstein’s “Oklahoma!.” Music by Richard Rodgers, book and lyrics by Oscar Hammerstein II. Based on the play “Green Grow the Lilacs” by Lynn Riggs. Directed an choreographed by Richard and Sharon Jenkins. Set and lighting design by Eugene Lee. Costume design by Toni Spadafora. Sound design by Peter Sasha Hurowitz. At the Chace Theater at the Trinity Repertory Company, Providence. Through June 5. http://www.trinityrep.com.