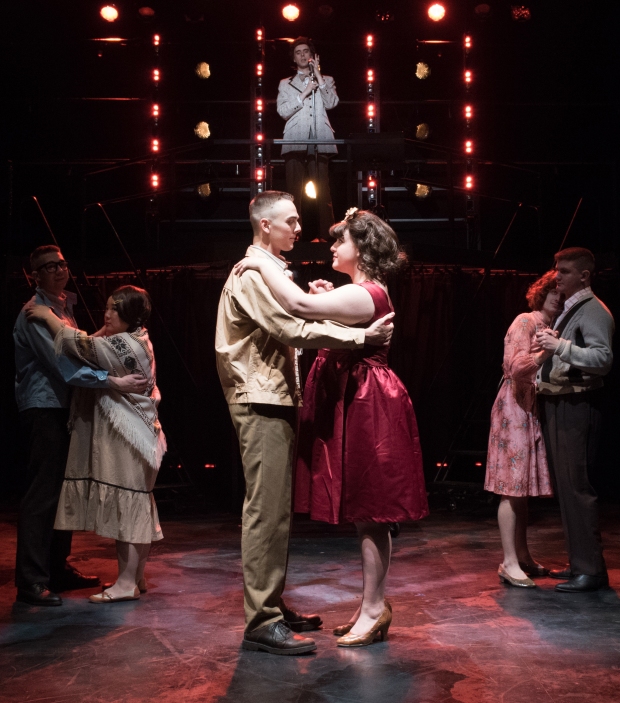 BOSTON – This reviewer has always had a soft spot for smaller, intimate musicals, the kind of musical storytelling where’s it’s not the spectacle but the story that matters.

The Speakeasy Stage Company has shared that same soft spot in both its former homes in the Boston Center for the Arts’ Plaza or Black Box theaters, where it staged shows such as Lynn Ahrens and Stephen Flaherty’s “A Man of no Importance” and now in its present home in the Calderwood Pavilion of the BCA.

Earlier this season Speakeasy scored with “Violet,” one woman’s journey to redemption, and Speakeasy is winding up its 25th season with the Boston premiere of “Dogfight,” now at the Roberts Studio Theatre of the Caldwerwood Pavilion through June 4.

“Dogfight” is a heartfelt, oft-harrowing portrait of young men – and a young woman – trying to find their footing, set against the backdrop of the Vietnam War and a seminal moment in U.S. history.

Speakeasy Artistic Director Paul Daigneault has marked the end of the Speakeasy season with a smart, honest, soulful staging of the work.

The promising young songwriting team of Benj Pasek and Justin Paul wrote the score, with a book by Peter Duchan, based on the 1991 Warner Brothers movie that starred River Phoenix and Lili Taylor, with a screenplay by Bob Comfort.

Pasek and Paul, 30 and 31 years old, respectively, wrote the score for the musical adaptation of “A Christmas Story” and earned a Tony nomination; the show was warmly received during a tour that landed in Boston, and their newest show, “Dear Evan Hansen,” is opening as we speak at the Second Stage Theatre in Manhattan.

For “Dogfight,” Daigneault has assembled a cadre of young, talented performers, as Speakeasy has never been reluctant to showcase young talent – when it comes to writers, actors or designers — and here it puts the leads in the hands of recent Boston Conservatory graduate Jordan J. Ford and Alejandra M. Parrilla, graduating this spring from the conservatory and here making her professional debut.

The story is seen through the eyes of Ford as Marine Corporal Eddie Birdlace, one of three Marines with identical tattoos who make up the “Three Bees” along with Boland (Jared Troilo) and Bernstein (Drew Arisco). They are together, but apart: Birdlace is a stolid, laid-back sort, the glasses-wearing Bernstein is a bit dorky and timid while Boland is more cynical and street-smart.

Their motto is “Semper Fi, Do or Die” and they pledge allegiance to each other after surviving the hell of Marine basic training – training believed by many to be dehumanizing, to prepare the Marines for what they will see – and have to do – in combat.

On Nov. 21, 1963, the night before the assassination of President John F. Kennedy, a day that would change the world forever, the Marines are about to ship out from San Francisco to a small but growing conflict in a Southeast Asian country called Vietnam.

But before they go, they have a night on the town and part of that night will be the ritual of a “dogfight,” in which the Marines compete to see who can bring the ugliest date to a party. Two rules: “No hookers, no lookers.”

Birdlace happens on a young waitress named Rose Fenny (Parrilla) at a diner, and he invites to “a party.” Rose, a would-be songwriter closely attuned to Woody Guthrie and the folk scene of the day preens and preps for the party (“Nothing Short of Wonderful”).

But when the time comes for Birdlace to take Rose out onto on the dance floor and officially make her part of the “dogfight,” he wavers before giving in. When the scheme is revealed, her anger – and his regret – are palpable.

But Birdlace won’t let it end like that, and he pursues Rose to her to home to take her out to dinner, which leads to a moving, charmingly awkward love scene.

Conductor/keyboardist Jose Delgado leads a four-piece ensemble that gives a strong voice to the score, and Parrilla and Ford fill the vocal requirements nicely.

Pasek and Paul have given Rose some of the lovelier pieces: “Pretty Funny” in the first act, “First Date, Last Night” with Birdlace in the second act and a solo on “Before It’s Over” in Act II.

The production numbers are smartly choreographed by Larry Sousa, including the bitterly ironic “Hometown Hero’s Ticker Tape Parade” that opens the second act.

Acting support comes from McCaela Donovan as a hapless, toothless, impossibly big-haired prostitute and Jenna Lee Scott as a Native American woman who are both dragged into the “dogfight”; Liliane Klein as Rose’s mother; Patrick Varner in a hatful of supporting roles; and Dylan James Whelan, Dave Heard, and Edward Rubenacker as other Marines.

Eventually the “Three B’s” will go off to war and Birdlace will return to San Francisco years later under very different circumstances, changed forever.

The Marines in “Dogfight” are filled with confidence and a sense of invulnerability, but the Vietnam experience will change all that. When young men go off to war, young men die, and that’s especially true of U.S. Marines. And even when they don’t die, what they come back as – and what they come back to, in this case – may not be pretty.

← ‘Oklahoma!’ is a bright, bold re-telling of classic
Take a gonzo road trip in A.R.T.’s ‘RoosevElvis’ →