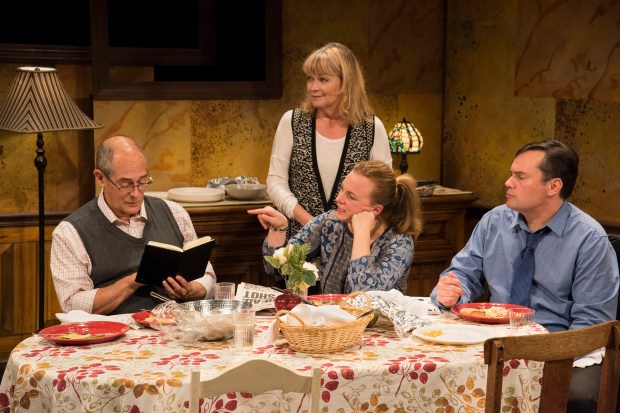 WATERTOWN – With the Apple family, it’s not about the destination, but the journey.

The series of four plays by Richard Nelson are all about small pleasures – such as eating and drinking with loved ones – and family crises set against the backdrop of important political moments or historical anniversaries.

While Stoneham Theatre Artistic Director Weylin Symes has directed all four,and  in a cooperative effort, the four plays have been presented over the past two years not only at the Stoneham Theatre, but the Gloucester Stage Company and now the New Repertory Theatre.

They do stand on their own, although seeing one of the earlier plays does give you a head start on who’s who, and what their backstories are.

The final installemnt, “Regular Singing,” now being presented at the New Rep, unfolds almost in real time as the members of the Apple family eat and drink at a table in the family home in Rhinebeck, N.Y., the upstate town where playwright Nelson still lives and works.

The first play, “That Hopey Changey Thing” was presented at Stoneham in February 2015 before the run of “Sweet and Sad” last summer in Gloucester; “Sorry,“ set on Election Day 2012, was presented in February of this year, again at Stoneham and “Regular Singing,” the final play in the series, which is set in 2013 on the 50th anniversary of President Kennedy’s assassination, is running now at the Mosesian Theatre at the Arsenal Center for the Arts Through Sept. 25.
Symes struck gold when the cast of Joel Colodner, Laura Latreille, Karen MacDonald, Paul Melendy, Bill Mootos, and Sarah Newhouse agreed to stay on for all four plays.

Without the usual learning curve of actors assuming a new role and also learning how to play off one another, ”Regular Singing” starts off on second or possibly third base, and it’s far easier for Symes to bring the piece home.

Marian Apple (Newhouse), a third-grade teacher, has already seen tragedy in her life in the death of her daughter and as the play opens ex-husband Adam – never seen – is in an upstairs bedroom, in his final hours.

It is the 50th anniversary of the death of JFK, casting a further shadow on the day as Marian, already mired in sadness over the loss of a daughter is now again awaiting the death of someone at a a young age, mirroring dramatically JFK’s death at the age of 46.

As in the previous three plays,. MacDonald as high school teacher Barbara Apple is the glue who holds it all together, hovering over the family meal and engaging everyone in conversation – including Uncle Benjamin Apple (Colodner), a former actor who suffered severe amnesia after a coma that was a complication of a heart attack. As in real life, his deterioration has continued during the run of the shows and he wanders in and out of the flow of conversation as Barbara, his main caretaker, prompts him to recall events.

Mootos reprises his role as Richard Apple, a lawyer who has fled to Albany to work in government and now regards the city as the Paris of upstate New York, putting him somewhat at odds with sister Jane Apple (Laura Latreille), a floundering writer.

Paul Melendy has given a series of heartfelt performances as Tim Andrews, Jane Apple’s boyfriend, a sometimes actor who like many actors is a waiter first, still hoping for that career that will probably never be.

Family tensions will spark a confrontation and the Apples will discuss Adam’s plans for his service and many other things during the 110-minute production performed without an intermission.

For those who have been following the Apple family through the quartet of plays,”Regular Singing” is a chance to slip into some comfortable theatrical slippers one more time and find in the Apples some truths that they can carry over into their own lives.

← ‘Significant Other’: Maraio shines, and others follow
‘Cheers Live on stage’: If you liked the TV show… →