NSMT’s ‘Spamalot’: The Pythons would be proud 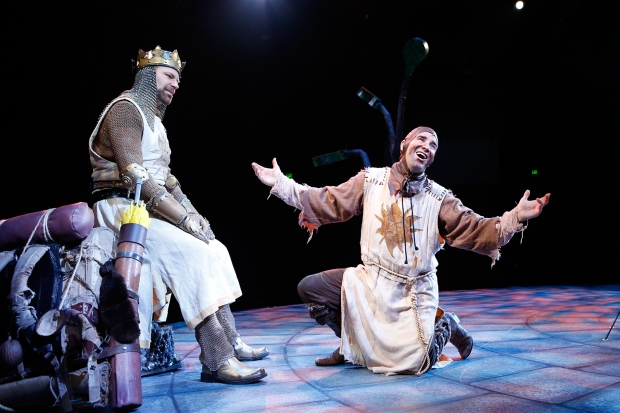 BEVERLY – And now for something completely different. Before 2004, Broadway had never really seen a show such as “Spamalot,” the famed British comedy troupe Monty Python’s take on the tale of King Arthur and his Round Table, now at the North Shore Music Theatre.

That’s because a musical that simultaneously poked the musical genre in the ribs while also containing many of the elements of the successful musical was as rare as Halley’s Comet.

Somehow, Eric Idle and company, who first came to prominence with American audiences when their British TV series came to PBS, have crafted such a piece with jaunty production numbers, catchy tunes such as “Find Your Grail” and “The Song That Goes Like This,” and past hits such as “Always Look on the Bright Side of Life,” from their film “Life of Brian.”

They combine it all with the troupe’s signature irreverent humor, evident from even the title, combining the kingdom of Camelot and the food Spam, featured in several Python skits.

The book and lyrics are by Python mainstay Idle, with music by John Du Prez, and “Spamalot” feels – for the first few seconds or so – like a typical Broadway musical. Then comes “The Fisch-Shlapping Song,” and all that goes out the window. 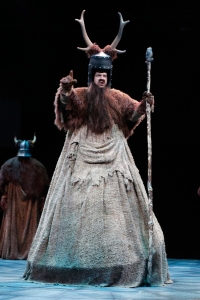 At times, “Spamalot” is crude, vulgar, and offensive – practically a must for a Python production – but it is always totally hilarious. It bagged 14 Tony nominations in the 2004-05 Broadway season, and won three, including Best Musical.

If you’ve seen the 1975 movie “Monty Python and the Holy Grail,” – which, according to the show credits, was “lovingly ripped off” for this show – you will recognize many of the vignettes and characters who populate the world of King Arthur and his Knights of the (Very) Round Table.

There’s the killer rabbit, the French Taunter, the Knights Who Say ‘Ni”, the Black Knight., etc..

The plot – such as it is – has King Arthur and Company hot on the trail of The Grail, the vessel used in the Last Supper. Unfortunately, there are  roadblocks, distractions and pitfalls to be overcome along the way.

To make it all happen, you need a cast that is deadly serious about being funny. Al Bundonis is a somewhat bland King Arthur, but he does have his moments, such as his  socioeconomic discussions with his subjects.

Brad Bradley was an original cast member of “Spamalot” on Broadway and spent two years playing Patsy on the first national tour, and he is a gem reprising the role as King Arthur’s loyal, long-suffering, coconut-clapping right-hand man.

Several cast members are skillfully juggling several roles, such as J.D. Daw as Sir Dennis Galahad, the brave but very doomed Black Knight, and Prince Herbert’s father, keen to marry off (or kill off) his son.

Jonathan Gregg is a Sir Lancelot who finally identifies his sexual orientation with gusto; he also plays the French Taunter, and the Knight of Ni.

Sean Bell is a hoot in several roles as a confused historian, Not Dead Fred in the brilliant “Bring Out Your Dead” scene,  a French Guard, the minstrel who harangues Sir Robin and last and best, the fey Prince Herbert, “rescued” by the knight of his dreams.

Haley Swindal is a silken-voiced, diva-ish Lady of the Lake, who would very much like to see her role expanded while also becoming Queen Guinevere.

Beverly native Jamie Beaman has carved out quite a solid career, including an IRNE Award for his work in Ogunquit Theater’s “Nice Work if You Can Get It” last season, and here he shines as the craven Sir Robin, determined to prove his bravery but constantly falling short, as the minstrel never fails to reminds him in song in “Brave Sir Robin” and its sequels.

The Pythons practically invented the concept of being politically incorrect, and when King Arthur is commanded to put together a Broadway musical, Beaman as Sir Robin performs“You Won’t Succeed on Broadway, ” highlighting the importance of a certain ethnic group’s inclusion in the process.

Along the way, a certain presidential candidate will become the subject of a hilarious monologue.

The jokes and sight gags come at you so fast and furious you’ll likely be recovering from the first when they hit you with the second.

Director Billy Sprague Jr., who also choreographed, has captured the spirit that has made Monty Python so great amd imbued that spirit in his talented cast.

So join King Arthur and his knights on their quest for the Holy Grail in a “traditional” musical that gleefully and hilariously makes its own rules.

← Costumes are the co-star in Fiddlehead’s ‘Priscilla’
‘Man in Snow’: Love and loss on a mountaintop →