‘Man in Snow’: Love and loss on a mountaintop

GLOUCESTER – Perhaps it takes a place where the air is rare and the cold is unforgiving for a man to begin to think clearly.

For a sixty-something man named David Kipling, that place is a cabin on Denali, aka Mt. McKinley, the highest peak in North America, a place he has come to both test himself and assess his life in the Gloucester Stage Company’s world premiere production of “Man in Snow,” Israel Horovitz’s compelling, gripping, at times harrowing new play.

Horovitz, the founder of the GSC and for many years its artistic director, has assembled a superb cast led by Will Lyman and including frequent GSC visitors Paul O’Brien and Sandra Shipley.

Lyman’s David has come to Denali to guide a gaggle of Japanese honeymooners up the mountain, where they will seek to conceive children under the Northern Lights – the Aurora Borealis – which they believe will confer upon that child certain powers.

The danger from 26-below-zero temperatures, the beginning of avalanche season, and the fact it’s been 40 years since David last scaled the mountain – a plot piece that Horovitz seems to have left hanging with no explanation – have made him anxious and questioning himself about his career as a bond and stock trader, and unsure about the choices he has made in several other areas. 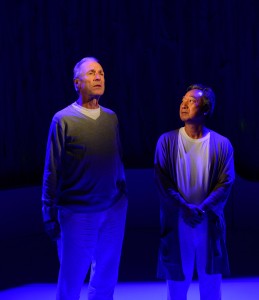 He is haunted by the death six years earlier of his beloved son Joey – (Francisco Solarzano) who he sees all around him – in a motorcycle accident. Solarzano doesn’t try to gild the lily in portraying the dead son as some kind of mystical being, making him the more believable

David’s long marriage with book editor Franny (Shipley) has been satisfying but has not, as we find out later, been without its bumps and bruises. The scenes between Lyman and Shipley are quite simply a master class in acting, setting the example for the entire ensemble.

Ron Nakahara lends wisdom and warmth to David in the role of Mr. Takayama, an 89-year-old father of 12 who has recently lost his wife and is serving as a translator for the Japanese. He tells David many of his children were born on the mountain under the Northern Lights and he believes in their power.

Ashley Risteen gives strong voice to Emily, David and Franny’s daughter, who has felt like an unwanted and ignored member of the family, and has made her feelings known.

Horovitz was inspired to write the piece by a real-life episode in which a man was trapped in a cabin under 30 feet of snow after an avalanche on Mount McKinley and, according to an author’s note by Horovitz, spent the last minutes of his life on a mobile phone, saying goodbye to his wife.’

While the play is set in a mountain cabin on Denali, the action moves quickly back and forth in time, but the transitions are clearly marked and en pointe, and there is little chance of confusion.

“Man In Snow’’ began life as a 42-minute, award-winning radio play nearly two decades ago and was later presented at that length as a theatrical vehicle in Italy by the company that Horovitz co-directs with Italian colleague Andrea Paciotto.

Horovitz eventually doubled the length of the piece to the production now having its world premiere.

The production was originally to be directed by Paciotto, but when unforeseen circumstances arose, the author eventually ended up directing and after seeing the result, it’s hard to imagine anyone else in the job.

The next stop for “Man In Snow’’ after Gloucester is a run at La MaMa, in New York, with the same cast aboard.

Scenic designer Jenna McFarland Lord and Horovitz decided at some point when staging the piece less is more when to comes to depicting something as vast as a mountaintop. It was a cogent and effective choice to present a simple mountainscape and the camp, which eventually gives way to something more dramatic in the harrowing final moments of the play, when husband and wife lay all of their cards on the table.

← NSMT’s ‘Spamalot’: The Pythons would be proud
‘Uncanny Valley’: A humanoid brought to … life? →