‘Hand to God’ : A teen’s grief in puppet form 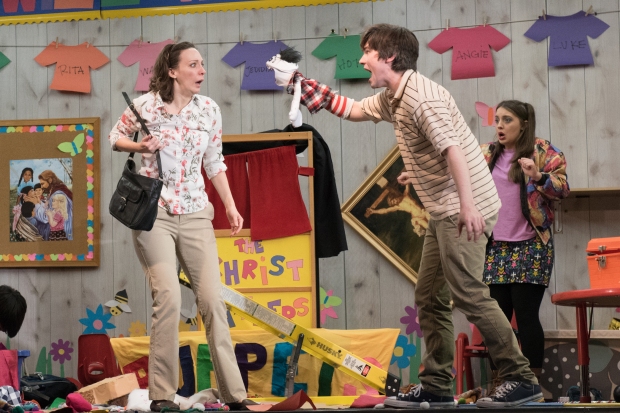 It can manifest itself in almost any kind of behavior, including substance abuse, emotional outbursts, and irrational decisions.

It can also manifest itself in the form of a satanic sock puppet named Tyrone, who expresses the grief and anger that a teen named Jason (Eliott Purcell), who created him, cannot find other ways to express.

That sets the stage for the Speakeasy Stage Company’s intense, funny, and oft-chilling production of Robert Askins’ “Hand to God.”

The Broadway production received five Tony nominations and is the story of Cypress, Texas resident Jason and mother Margery (Marianna Bassham), who are still reeling after the death of their father and husband six months before after his long period of ill health. It was a period in which there was not much happiness to be found in the home, and Jason harbors guilt that his mother – and possibly he himself – did not do enough to help keep his father healthy and happy.

Lonely Pastor Greg (Lewis D. Wheeler) has waited what he considers to be a respectful six-month waiting period before making his move on the vulnerable widow at a local church, and subtlety is not his forte, his desires barely masked at first before being boldly stated. In an effort to draw her closer, he assigns Margery a task as the head of a “puppet ministry” tn the basement of the church, with the goal of putting on a skit as part of a Sunday service.

Christina Todesco’s set of the basement is that of a kindergarten-type school room/community room, with tiny chairs and school decorations, and an upper level with swings that serves as a refuge for the characters from the chaos going on in the basement.

Margery’s puppet group also includes Josephine Elwood as a kindly young woman named Jessica, a reluctant member of the puppet crew who may be enamored of Jason but also fearful of being rejected.

Dario Ladani Sanchez is an archetypal “bad boy” type as a swaggering strutting, bullying teen named Timothy who is also part of the puppet group. He confesses to Margery that he “loves” her — and Margery makes the type of irrational decision that grief-stricken people who may also be wracked with guilt make. She takes up with him, with disastrous consequences when Timothy conveys his conquest to Jason.

As Jason, Purcell has woven a brave, skilled, powerful performance. His puppet Tyrone is capable of saying just what Jason is thinking – even if it’s graphic or pornographic – the complete opposite of the timid teen whose hand he springs from.

There are terrifying and chilling moments when Tyrone attacks Jason, the boy frighteningly turning on himself, as Askins and Director David R. Gammons leave open the possibility that something really evil might be going on here – something above our ken as human beings.

There are also hilarious moments when Jessica – in a bid to separate Jason from Tyrone – fashions her own puppet as a “partner” for Tyrone, sparking a scene of puppet copulation that rivals anything in “Avenue Q.”

While “Hand to God” is a very original piece, there are echoes here of “The Excorcist,” and even the 1978 terrifying movie thriller “Magic,” starring Anthony Hopkins as a ventriloquist with a dummy that’s also a serial killer.

Special mention should be made to the puppetry direction of Roxanna Myhrum and the puppet design by Jonathan Little. Tyrone’s design is simple but off-putting, as such a creature/creation should be.

Gammons helped Purcell find the right tone and style for Tyrone as well as for Jason and wrests fine performances across the board, Bassham as a woman unhinged, made even moreso by the sudden appearance of Tyrone, and even Wheeler’s Pastor Greg, who finds himself called to confront Jason/Tyrone and try to bring the boy back from the abyss.

Production values are important here, especially with material where the tone changes in a heartbeat. The lighting design by Jeff Adelberg and sound design by Andrew Duncan Will include Adelberg’s flashing lights and Will’s radio static, thunder and the ranting of a pastor as the backdrop to Tyrone’s coming-out party as he threatens to completely envelop Jason.

“Hand to God” talks about faith in the face of loss, and the need to confront our grief and express it as best we can while looking towards a future – a future that doesn’t include a terrifying sock puppet named Tyrone.

The Speakeasy Stage Company production of Robert Askins’ “Hand to God.” Directed by David R. Gammons. Scenic design by Christina Todesco. Costume design by Gail Astrid Buckley. Lighting design by Jeff Adelberg. Sound design by Andrew Duncan Will. In the Wimberly Theater in the Calderwood Pavilion of the Boston Center for the Arts through Feb. 4. speakeasystage.com. 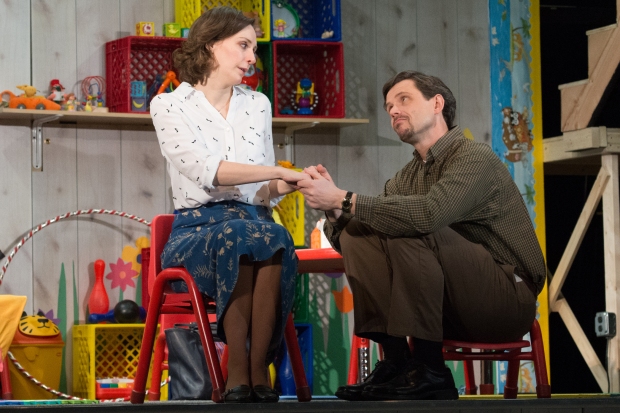