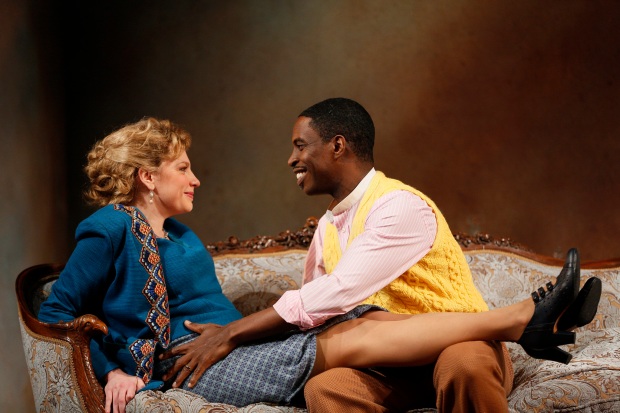 BOSTON – The last time she appeared on the stage of the BU Theatre, Andrea Syglowski generated a lot of heat in the middle of winter in her award-winning performance in the Huntington Theatre Company’s “Venus in Fur.”

Three years later, she has returned as Nora in the Huntington’s production of Henrik Ibsen’s “A Doll’s House.” Alas, this production, despite very strong performances by both Syglowski and Nael Nacer, only occasionally generates that same kind of theatrical heat.

The Norwegian classic set in 1879 is the story of an upper-middle-class couple: Torvald (Sekou Laidlow) and Nora (Syglowski) Helmer. After eight years of marriage and three children, the couple has been clinging to an upper-middle-class existence that includes both a housekeeper (Lizzie Milanovich) and a nanny (Adrianne Krstansky).

A handsome, successful husband. Three handsome children who are well-cared for. The stuff, it would seem, of domestic contentment

And happy times appear to really be here again after Torvald completes his climb up the ladder at his bank by being named director, a post he is preparing for as the play opens on Christmas Eve. The couple’s long-term financial stresses are about to evaporate.

That climb up the ladder was made possible by Nora. Torvald had a period of ill health that required him to move south for a stretch of time. There wasn’t enough money on hand, so Nora took matters into her own hand and arranged for a loan that would allow Torvald to recover in peace.

But in getting the loan, she has cut a corner that will come back to haunt her, forging the signature of her father – who was to be the guarantor of the loan – on the promissory note she filed with Krogstad (Nael Nacer), who facilitated the loan.

Krogstad himself was embroiled in a scandal before he rebounded to find a position with Torvald’s bank. Now he has found that Torvald plans to fire him — just as he has finally begun to reach a level of financial security after hitting bottom.

He confronts Nora about the promissory note that contains the forged signature. and threatens to reveal her fraud in retaliation for Torvald letting him go.

Nael Nacer as Krogstad is one of the very few actors in Greater Boston who can generate almost any level of intensity a role calls for, and here Nacer nails the part of a man falling from grace, the excruciating pain of someone who believes he has wrested a second chance in life only to see it snatched away – by a man whose wife he can destroy, if he wants.

Playwright Melia Bensussen has added another element and spiced up the casting with the inclusion of two African-Americans: Laidlow as Torvald and Marianna Anderson as Christina Linde, a family friend who comes in search of a job and eventually finds herself in the middle of the tug-of-war between Nora and Krogstad. Linde’s past history with Krogstad adds another knot to the tangle of relationships

Ibsen didn’t paint quite as complete a portrait for Torvald as he did for Nora, and Laidlow’s Torvald struggles to find and hold his center. Jeremy Webb has some nice moments as Dr. Rank, a longtime family friend who is dying, and thus finds no cost in admitting his love for Nora.

Krogstad ups the ante when he reveals what Nora has done to Torvald, and an enraged Torwald paints the picture of a woman who selfishly has destroyed her mate and taken him and their family down with her.

When Krogstad delivers the promissory note and decides not to take Nora and Torvald down, it is too little, too late, for Nora, who is in a state of emotional desolation.

The translation by British playwright Bryony Lavery is accessible and free-flowing — this is its first professional production in the U.S. – but problems arise at the point where Nora makes a momentous, life-changing decision. The problem is that the decision doesn’t seem easily understood or accepted by the audience, and it’s hard to say if the fault lies with Ibsen or the translation.

The reaction by the audience at a recent performance to what should have been a stunning denouement was tepid, almost as if they were also cool to what was happening onstage.

That doesn’t mean that “A Doll’s House” – with some excellent performances and the usual handsome staging that is a hallmark of Huntington productions – isn’t a worthy re-telling of a classic. Nora’s exit just doesn’t seem to hit home with the force it should.