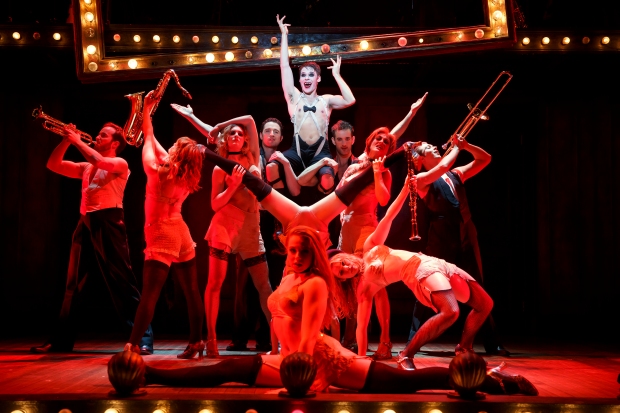 BOSTON – This is where it all began.

The brilliant careers of composer John Kander and the late lyricist Fred Ebb really took off in 1966 when their second musical – “Cabaret” – stopped off at the Colonial Theatre in Boston enroute to Broadway glory, winning eight Tony Awards and making a star out of Joel Grey as The Emcee.

“Cabaret” has returned several times in the last half-century, and is back and fresh as ever in a stunning, powerful production by the 50-year-old Roundabout Theatre Company, being presented by Broadway in Boston at the Opera House through Feb. 12.

This production is directed by BT McNicholl and based on the 1998 Roundabout revival directed by Rob Marshall and Sam Mendes, and Roundabout’s subsequent 2013 revival. This is a darker, dingier and more decadent production than the “Cabaret” of Joel Grey/Broadway fame and the movie version with Liza Minnelli.

The irony is even heavier when The Emcee (Randy Harrison) tells us we have come to a refuge and to “leave our troubles outside.” He admits these are troubled times “But in the Kit Kat Klub, life is beautiful … the girls are beautiful … even the band is beautiful.”

The band doubles as cast members in a gambit that has been used several times since the initial Broadway run of the show.

In the late stages of the pre-World War II Weimar Republic, the Nazis are starting to feel their oats in divinely decadent Berlin, and this production chooses to make the goose-stepping even louder as  American writer Clifford Bradshaw (Benjamin Eakely) comes to Berlin in search of his muse.

He meets a mysterious man named Ernst Ludvig ( Patrick Vaill), who befriends him on the train and offers help on what to do in Berlin and even where to find cheap lodging.

He ends up at the rooming house of Fraulein Schneider (a superb Mary Gordon Murray), who has survived both World War I and runaway inflation, but her rooming house has seen better days, and is now a flophouse for drifters and assorted lowlifes such as prostitute Fraulein Kost (Alison Ewing).

Schneider attempts to retain a certain respectability but in reality has abandoned all hope of it as a fleet’s worth of sailors traipse through the home toward Fraulein Kost’s room. 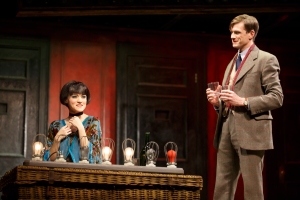 Sally loses her situation shortly afterwards, and arrives unannounced in Bradshaw’s room, where she begs and pleads for shelter.

The bisexual Bradshaw takes her in and tries to eke out a living giving English lessons and doing well-paid and shadowy errands for Ernst.

There is nary a weak link in the cast, but the trio of standouts are Harrison, Murray as Fraulein Schneider and Goss as Sally Bowles.

The plot presents Fraulein Schneider with a Hobson’s Choice: Abandon perhaps her last chance for love and company with Jewish fruit merchant Herr Schultz (Scott Robertson) or abandon him for possible safety and survival from the Nazi purge.

Lest we forget, the Kander/Ebb score is a pastiche of many different kinds of songs, from the Emcee’s energetic “Wilkommen,” novelty production numbers (“Money,” “If You Could See Her”) the chilling “Tomorrow Belongs to Me” and heartfelt ballads such as “Maybe This Time” and “What Would You Do?”.And, of course, the title tune, belted out with abandon by Goss, is anything but second-rate.

He is very welcoming — indeed, even jovial at times as he seeks out audience members for a quick dance and mines the sexual double-entendres and the tawdriness of the Kit Cat Club boys and girls for all they’re worth,

That will be the setup for what comes later in the starkest, darkest moments of the piece, making the abrupt turnaround of the character all the more jarring,

The Rob Marshall choreography re-created by Cynthia Onrubio is sexy, raunchy, and perfectly in tune with the surroundings and the mood of the piece.

A note: The part of Sally Bowles will be performed from Feb. 7-12 by Leigh Ann Larkin.

“Cabaret” has lost none of its punch or power, and this production has an edge to it that only gets edgier as the echoes of the goose-steps get louder and louder.

The Roundabout Theatre Company production of “Cabaret.” Book by Joe Masterhoff. Music by John Kander. Lyrics by Fred Ebb. Based on the play by John Van Druten and the stories of Christopher Isherwood. Original Broadway direction by Sam Mendes and original co-direction & choreography by Rob Marshall. Tour direction by BT McNicholl and choreography recreated by Cynthia Onrubia. Set design by Robert Brill, costume design by William Ivey Long, lighting design by Peggy Eisenhauer and Mike Baldassari, sound design by Keith Caggiano, based on the original Broadway design by Brian Ronan. At the Boston Opera House through Feb. 12. broadwayinboston.com.

← Lyric Stage’s ‘Virginia Woolf’: A battle for the ages
‘Brecht on Brecht’: More context would have helped →