‘Brecht on Brecht’: More context would have helped 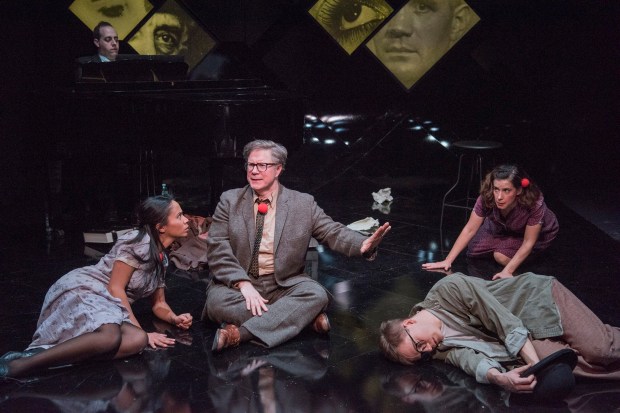 WATERTOWN – Bertolt Brecht isn’t big box office anymore. But his thoughts and words were relevant in their time and many believe are even more relevant today.

The New Repertory Theatre’s co- production with the Boston Center for American Performance of “Brecht on Brecht” is a pastiche of plays, poems, writings and songs of the German playwright, poet, and theatrical director who advocated for the common man against the abuses of the ruling class.

The work was pieced together by playwright George Tabori from various translations and was first presented in New York City in 1962.

Brecht was renowned for his so-called “epic” style of theater and his fierce advocacy for human rights in words, lyrics and poems. His is a voice that refused to be silenced until his death at 58.

Given all that, this work is a bit of a mish-mash, but it does feature a quartet of fine performers with winning voices. When we first meet them, they are adorned with clown noses in a light-hearted introduction to the piece. Carla Martinez and Jake Murphy play a younger couple, Christine Hamel amnd Brad Daniel Peloquin their “mature” counterparts.

The most effective parts of the 90-minute, no intermission production are the musical numbers Brecht wrote with Kurt Weill and Hans Eisler. Peloquin authors a nuanced, soulful rendition of “Mack The Knife” from the Weill-Brecht musical “The Threepenny Opera,” a groundbreaking work credited with moving the genre forward. Martinez is en pointe with her rendition of “Surabaya Johnny” from Weill-Brecht’s “Happy End.”

Brecht did much of his important work after fleeing Germany in 1933 shortly after Hitler took power.

He spent eight years in Scandinavia before coming to the U.S. In 1941.

He was hauled before the House Un-American Activities Committee in 1947 and asked to explain his beliefs; some of his testimony is included here. Unnerved by the inquisition, he left the U.S. for good to return to Germany, where he ran his Berliner Ensemble with wife and collaborator Helene Weigel.

There is a short excerpt – perhaps not enough – from “The Life of Galileo,” a work by Brecht about “the bourgeoisie” or ruling class – in this case, the Catholic Church – forcing the scientist (Galileo) to recant his scientific discoveries or lose everything.

As someone who is admittedly not a Brechtian scholar – merely having skimmed across the top of his best-known works – it would have been helpful to credit the musical numbers and excerpts, etc., in the program. Yes, we know he wrote “Mack The Knife” with Kurt Weill as part of “The Threepenny Opera,” but knowing where a particular scene came from could stoke interest in going back to the work in question.

New Rep Artistic Director Jim Petosa directs. He has cast wisely and put the performers in the best possible places to showcase their talents, two of a director’s more important duties.

“Brecht on Brecht” is entertaining, but again it left us seeking more context on the material being presented, so we might know a bit more why he did what he did when he did it.

Kudos to musical director Matthew Stern for his sterling accompaniment that’s in perfect balance with the voices.

Perhaps the most effective excerpt of a Brecht work is an extended sequence from his one-act play “The Jewish Wife,” in which Hamel portrays a Jewish woman whose mere presence in the household as the Nazis gain power provokes a Hobson’s Choice: Stay and watch her husband’s career dissolve, or leave for good, saving his career and perhaps her own life.

The Brechtian philosophy can be best summed up by one of the quotes Petosa chose to highlight in his program notes: “The worst illiterate is the political illiterate,” the playwright railing against those who are proud that they hate politics and choose not to become involved.

Another Brecht bon mot: “Art is not a mirror held up to reality but a hammer with which to shape it.”

Looking at the play selections local theatrical troupes are making in these times, it’s an artistic philosophy many agree with.

The New Repertory Theatre and Boston Center for American Performance production of “Brecht on Brecht.” Arranged by George Tabori from various translations. Directed by Jim Petosa. At the Black Box Theatre in the Mosesian Center for the Arts through March 5. newrep.org.