BOSTON – The musical “Cabaret” is a work of great risk and great reward, terribly difficult to do well because its core elements are so demanding.

It is a mark of the progress the local theatrical troupe Moonbox Productions has made in a few short years to see it take on the show in a fully-mounted production with a cast of 14, an eight-piece orchestra and first-rate production values, all happening through April 29 in the lovely Wimberly Theatre in the Calderwood Pavilion of the Boston Center for the Arts.

Based on the stories by Christopher Isherwood and the play “I Am A Camera” by John Van Druten, the storyline and book by Joe Masteroff revolves around the decadent cabaret scene of Berlin in 1931 and 1932, before the start of the Third Reich.

At the Kit Kat Club, The Emcee welcomes us in, invites us to put our troubles aside in a place where “the girls are beautiful, the boys are beautiful and even the band is beautiful.”

Phil Tayler as The Emcee in “Cabaret.” Photographer: Tom Shoemaker

He smoothly handles the vocals from the opening bars of “Wilkommen” and the comedic aspects of the role just as well, mugging in the bawdy “Two Ladies,” leading the raucous “Money” and the more ominous but telling “I Don’t Care Much.”

The other leads are just fine, with Jared Troilo as Clifford Bradshaw, the American writer hoping to find in Berlin the inspiration that eluded him in London and Paris.

Aimee Doherty, who has forged a starry career with some sublime performances, adds yet another as Sally Bowles, the Englishwoman who is at home among the detritus of the Kit Kat Club and lives for today, partying, wafting from man to man, and eschewing the “politics” that are keeping Bradshaw, the Jewish population and, eventually, everyone else in the world up at night.

Doherty’s renditions of “Maybe This Time” and “Cabaret” alone are worth the price of admission and she handles the eventual, inevitable heartbreak with Cliff with a palpable regret you can cut with a knife.

Joy Clark injects sassiness and wry humor into the role of the prostitute Fraulein Kost.

Director/choreographer Rachel Bertone created her own choreography, eschewing the original choreography by Marshall, and has also created several new design elements. In her own words “I believe that we have created a fresh snapshot of this classic piece of theater – highlighting what has changed and, sadly, what has not.”

Dan Prior is the unctuous Ernst Ludwig, who welcomes Cliff to Berlin, finds him clients for this English language classes, and eventually involves him in a money laundering scheme. Ludwig’s true colors are ultimately revealed in Prior’s chilling and gloriously-voiced “Tomorrow Belongs to Me” scene.

Bertone and Moonbox also excel with the subplot of a Jewish fruit merchant Herr Schultz (Ray O’Hare) and his poignant relationship with the equally lonely Fraulein Schneider (Maryann Zschau), Cliff’s landlady. Both are strong but Zschau is especially excellent, infusing heart and humor to such tunes as “So What,” “It Couldn’t Please Me More” and “Married.”

The Kit Kat Club boys and girls are sleek, sexy, and skilled dancers, bringing bounce and verve to the production numbers.

Music Director Dan Rodriguez and the orchestra are smartly situated in the rear of the second level of Janie E. Howland’s two-level set, where they deliver Fred Ebb’s and John Kander’s score with pizzazz and energy, in balance with the voices.

The other production values include spot-on costumes by the award-winning Marian Bertone, evocative lighting by Sam Biondolillo, which makes us all part of the audience at the Kit Kat Club, and sound design by David Wilson with voices in balance with the orchestra.

Kander and Ebb’s score for “Cabaret” never got its just due, partly because the duo wrote shows that were often both controversial and quirky, such as this show, “The Scottsboro Boys” and “Kiss of the Spider Woman,” and they remain one of the more underrated teams in musical theater history.

Moonbox and Bertone make a powerful statement in how they chose to end the production, with a theatrical device used infrequently but with great effect.

We are left to wonder anew just how what happened then happened, and whether it could happen now.

Moonbox has been punching above its weight for several seasons now, and with that success has come higher expectations. The good news is that as its grows and evolves, it is meeting the challenges it sets for itself and clearing an ever-rising theatrical bar with ease.

The Moonbox Productions’ “Cabaret.” Book by Joe Masteroff, based on the play by John Van Druten and the stories of Christopher Isherwood. Music and lyrics by John Kander and Fred Ebb. Directed and choreographed by Rachel Bertone. Set design by Janie E. Howland. Lighting design by Sam Biondolillo. Sound design by David Wilson At the Calderwood Pavilion of the Boston Center for the Arts through April 29. moonboxproductions.org 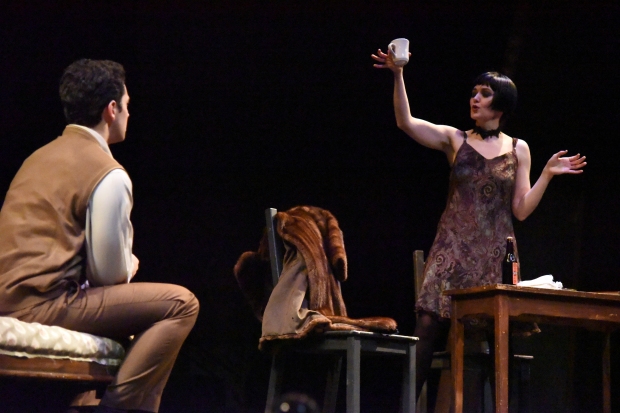