Estefans’ ‘On Your Feet’ puts a bounce in your step 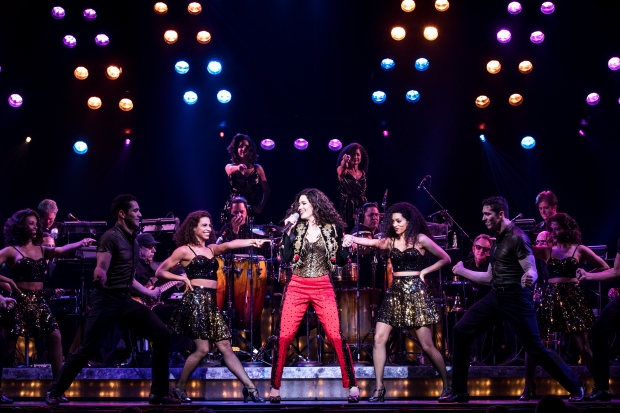 Christie Prades as Gloria Estefan and Company, ON YOUR FEET! c Matthew Murphy

BOSTON – Not every life can be made into a musical that can both entertain and tell a story.

But then most musicals don’t have the storyline of Gloria and Emilio Estefan, two Cuban immigrants who collaborated to change the face of pop music, instilling in it a salsa-flavored beat.

That allowed the Estefans and the Miami Sound Machine to rise to the top of the charts, crossing over from the niche Latin music scene to become international pop superstars.

The national touring production of “On Your Feet!,” now at the Boston Opera House through April 29, owes much to its charming, silky-voiced principals, Mauricio Martinez as Emilio and Christie Prada as Gloria.

But it owes just as much to the music the Estefans created and the story of their rise from humble beginnings as Cuban immigrants.

Act I details Gloria and Emilio’s rise, clearing various hurdles to stardom – not the least of which were the roadblocks set up by Gloria Estefan’s own family – and the second act works off the well-documented 1990 bus accident that almost cost Gloria Estefan her life, and her subsequent triumphant comeback.

The Fajardo family flees Cuba for Miami at the dawn of the Cuban revolution for a new life, and as the play opens Jason Fajardo (Jason Martinez) is serving with the U.S. Army in Vietnam, listening to a tape of his daughter Gloria singing and predicting stardom for her.

He is later beset by illness; Gloria become his caretaker and Jason dies at a young age, leaving his wife as the head of a family that also includes supportive grandmother Consuelo (Debra Cardona).

When Emilio approaches Gloria and asks her to sing for him, it causes a strain – to put it mildly – between Gloria and her mother (Nancy Ticotin, through April 22).

Consuelo (Debra Cardona) helps Gloria realizes the reason her mother isn’t supportive is that her own dreams of stardom and a career in Hollywood were dashed by her own father. It will later lead to an estrangement that will split the family for years.

Eventually, Ticotin as Gloria gets a chance to sing and strut her stuff on stage, the things she would have done if she had had the chance.

Alexander Dinelaris’ book faithfully chronicles the oft-bumpy ride of the Estefans and while he seems to be en pointe when it comes the family part of the equation, some of the dialogue doesn’t always quite ring as true hen it comes to the Estefans’ dealings with the music business. It’s never been a bunch of choirboys, but the record execs really take it on the chin in this re-telling.

The book chronicles the first tentative steps when Gloria begins performing with the “Miami Latin Boys,” who sing in Spanish and perform for peanuts.

Eventually, they becoming a premier act in the world of Latin music but aching to gain a wider audience. They struggle to first perform in English and then get their music before the public, oftimes performing for free in small venues exchange for a promise to have their music played on radio or at nightclubs.

That leads to funny moments when the band swallows its pride and plays bar mitzvahs and weddings as a way to spread the musical word, which is how a young Jewish boy comes to lead a Conga line.

Members of the Miami Sound Machine are in the orchestra to the rear of the stage, often in full view for the production numbers “Conga,” “Don’t Wanna Lose You” “Rhythm is Gonna Get You” and “Turn the Beat Around.”

It’s only when the action slows down in Act II after the near-fatal bus accident when the music becomes a series of slower ballads – some more effective than others – that the show becomes stagnant for a period\.

Eventually, the heat is cranked up again, including a dazzling finale, and encore dances, much in the style of of another jukebox musical, “Mamma Mia.”

By the end, you will have experienced an inspiring story you perhaps didn’t know that celebrates the achievements of two immigrants who found the American Dream.

The overall effect is to, indeed, bring the audience to its feet and eventually put them back onto Washington Street with a smile on their face and a bounce in their step.