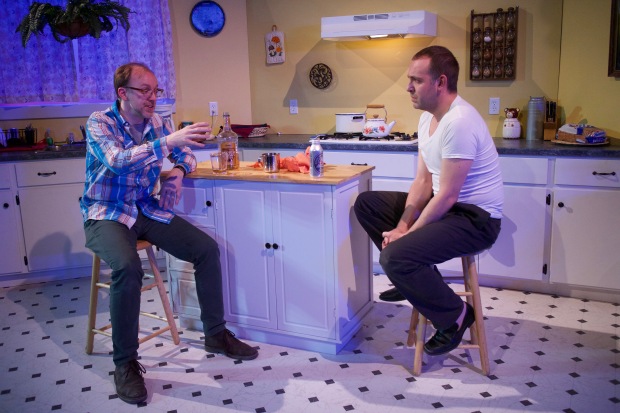 BOSTON – Discord and discomfort run rampant. It’s comic chaos in the desert. It’s just what the late playwright Sam Shepard was aiming for in “True West,” as the fortunes of two mismatched siblings are turned upside down with hilarious results .

The Hub Theatre Company of Boston is the latest to take a crack at the Shepard classic. Austin (Bob Mussett), a rather mousy Ivy League-educated screenwriter, is watching his mother’s home in southwest California while she’s off to Alaska.

He’s been surprised at the visit of brother Lee (Victor Shopov), taking time off from his full-time occupation as a small-time thief.

Lee has come in from the cold from his usual residency in the desolate Mojave and Death Valley areas of California, where Lee feels at home in the solitude of the barren lands. He waxes poetic about the wildlife and the freedom of it all, but Austin is unimpressed.

Austin suspects that the remoteness means many of the homes in the area are easy pickings for Lee, whose specialty appears to be boosting flat screen TVs.

Besides being a thief, Lee is also a a con man. He works his magic with an unctuous Hollywood producer named Saul (Robert Orzalli), who first pledges allegiance to Austin’s work when they meet at the family home, but just as quickly changes his tune after Lee pitches a story and challenges Saul to a golf match and a bet, which results in Saul switching sides.

There could be a $300,000 prize at the end of the rainbow. There’s just one problem: Lee can’t write what he knows, and is helpless to flesh out his ideas without Austin’s help.

The part of Lee calls for the type of intensity that few area actors can muster, but Victor Shopov is intensity personified when it is called for, and Shopov as Lee is surely scary when he is wielding a golf iron against a defenseless typewriter, reminding you of Pete Townshend of The Who smashing up another guitar onstage.

In the next moment he can be charming, as when he is buttering up Saul or pleading with Austin for help.

Austin is the picture of frustration as he first loses his gig and then is goaded and bullied by Lee to help him make what could be a $300,000 score.

Hub has set the play in the present day instead of Shepard’s 1980s, with a resulting culture clash at times, the principals pecking away at typewriters instead of computers but Lee also boosting flat screen TVs of recent vintage.

Mad props to props people Cesara Walters and Valerie Tracy, with many beers to be drunk, plants and typewriters destroyed or beaten to a pulp. Make way for a gaggle of toasters, testimony to the role reversals taking place during the play.

Kudos also to Ben Lieberson’s detailed kitchen, a warm, homey place that will be gradually dismembered.

The two brothers, meanwhile, will get down and dirty when nonstop drinking and verbal abuse aren’t enough.

It’s Director Dan Bourque’s duty to keep the goings-on at least minimally connected to reality, reining in the characters a bit – until the point of no return

Porzalli is a bit wasted here with a cardboard cut-out of a part as the producer. The part has so little substance that a good breeze might pick it it up and lift it away.

Lee and Austin’s mother (Maureen Adducci) appears near the end to profess her amazement at what her off-kilter sons have done to her home. There’s a truly funny moment when she cautions her sons – then in the throes of actually trying to kill each other – to take it outside so there will be no further damage to the home.

It all adds up to a Wild West of a show. Hold on to your hats for a hilarious – and, at times, truly scary – 90 minutes.

A reminder: Hub sells tickets to all its shows on a strictly “Pay What You Can” policy, the only Boston theater company to do so.