A dinner party for the ages in Churchill’s ‘Top Girls’ 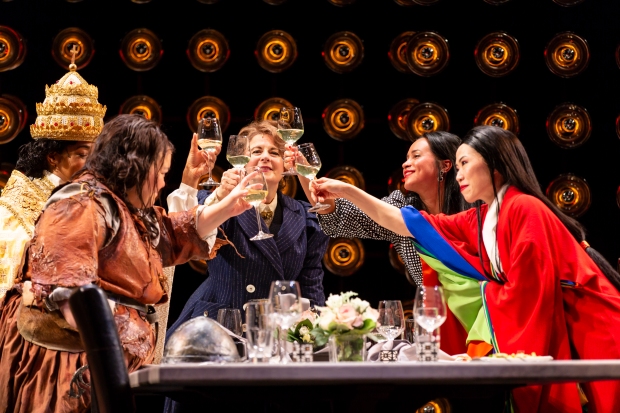 The two acts of her 1982 play “Top Girls,” now being presented by the Huntington Theatre Company, are 180 degrees apart in tone and style, but they dovetail nicely in showing us how circumstances may change through the centuries, but meaningful change– at least when it comes to women – is still painfully slow.

An imaginary dinner party for the ages in Act I gives way to a disquieting family drama in Act II.

As the play opens in a tony London restaurant, Marlene (Carmen Zilles) is celebrating her elevation to the top rung of the Top Girls employment agency, and the guest list is – how can we say it – eclectic.

They are women from the ages with stories to tell, stories of what they suffered at the hands of men.

The estimable Paul Plum is Victorian-era traveler Isabella Bird, who traveled the world as an unmarried woman in her 50s. Then there’s Lady Nijo (Vanessa Kai), a 13th-century Japanese courtesan to an emperor, who later transitioned to become a Buddhist nun, perhaps in reaction to all she saw and felt at the hands of the emperor; Pope Joan (Sophia Ramos), who may or may not served as pontiff in the Ninth Century, disguised as a man, but if she did, saw an untimely end; the imposing armor-wearing Dull Gret (Carmen M. Herlihy), the subject of a Bruegel painting in which a sword-wielding woman leads other women storming through hell; and Patient Griselda (Elia Monte-Brown), the subservient – and very much abused — wife of “The Clerk’s Tale’’ in Chaucer’s “The Canterbury Tales.”

They are greeted, one by one, by Marlene, their images projected in “selfies” above the stage.

There are harrowing tales of “he done her wrong,” some more grievous and deadly than others, such as children taken away and never seen again – but for the most part it is a competition of cruelty, each woman’s suffering a template for the stories to follow.

Churchill’s distinctive style also includes the characters talking over each other in that first act, a distracting theatrical no-no that she chooses to disregard. If you’re trying to follow the dialogue and can’t, don’t blame it on the director or players. It makes it difficult to discern individual stories.

“Top Girls” is directed by Liesl Tommy, the Tony-nominated director who has found an artistic home at the Huntington, where she has directed stirring productions of Lynn Nottage’s “Ruined,” August Wilson’s “Ma Rainey’s Black Bottom” and Lorraine Hansberry’s “A Raisin in the Sun.”

Tommy has also taken the liberty of updating the casting element, adding diversity into the cast where there was none in earlier productions.

The playwright will abruptly change horses in the middle of the stream that is intermission when it comes to Act II, a disquieting family drama set in the 1980s that ends with a torrid confrontation between Marlene – who after the promotion is still apparently carrying the baggage of those who came before her – and her sister Joyce (Ramos), who herself has a troubled relationship with her 16-year-old daughter Angie (Herlihy again).

It becomes – as if often does in– a struggle between members of two very different social strata as the newly-elevated Marlene’s attitude towards the downtrodden Angie permeates every word between the two.

Angie, it appears, is destined for heartbreak, and for her and many other women – women from centuries ago and women today — the struggle to be a “Top Girl” continues.

The Huntington Theatre Company production of Caryl Churchill’s “Top Girls.” Directed by Liesl Tommy. At the Huntington Avenue Theatre, Boston through May 20. Tickets start at $25. 617-0266-0800. huntingtontheatre.org.

← At the Nora, five pioneering women lost in the stars
‘Two Jews’: Laughter amidst a struggle to survive →