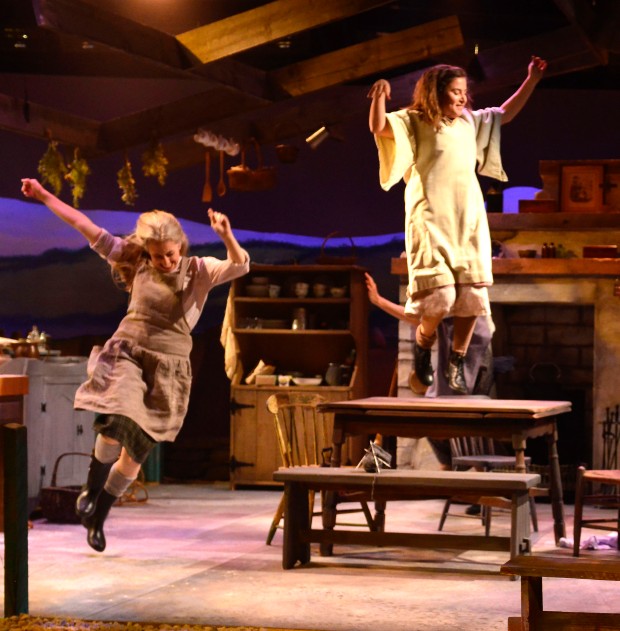 GLOUCESTER – In his 24 plays spread over a half-century, the late Irish playwright Brian Friel often cast a broad net in exploring the dynamics of familial relationships among his countrymen, which earned him comparisons to the Russian master Anton Chekhov.

In “Philadelphia, Here I Come” for example, he explores the feelings of an Irishman torn over leaving his elderly father to leave for America and a new life.

“Dancing in Lughnasa,” regarded by many as his greatest work, is now being presented by the Gloucester Stage Company through July 8.

In it, he explores the way relationships and roles in a large family become a delicate balance, that can be quickly become tipped and upset, with devastating results.

Many of his works were set in the small Irish village of Ballybeg, including “Lughnasa,” which takes place in the summer of 1936 in County Donegal, Ireland.

Spirits in the Mundy family, living in the family homestead — five sisters, unmarried and likely to remain so, a just-returned missionary priest and a seven year-old boy – have been lifted by the purchase of “The Wireless,” an often-balky battery-powered Marconi radio that periodically erupts with music, spending the Mundy sisters into spontaneous, spasmodic dances.

It has brought some of the magic of the outside world to the tiny little corner of Ballybeg. But is has also reinforced what the sisters are missing – the annual harvest dance they enjoyed, held each August and rapidly approaching.

A word about Lindsay Crouse. Early on, my partner who has seen Crouse on the Gloucester stage several times could not decipher which role she was performing. The petite actress almost completely disappears into a role, this time as Kate, the no-nonsense eldest sister and breadwinner for the family. She is in command, but it is a joyless one, and she has seemingly snuffed out all hope the others have of ever leaving the family homestead.

Her second-in-command is Maggie (Jennie Israel, a mainstay of Actors Shakespeare Project) who does many of the household chores including the cooking, but still harbors fading hopes of finding someone who will take her away.

A dalliance between Chris (Cassie Gilling) and a Welshman named Gerry (Chris Kandra) has produced a son, Michael, now 7, and sisters Aggie (Bryn Austin) and flighty Rose (Samantha Richert), who may be taking up again with a married suitor, are knitting at home to bring in a few extra pounds.

Maggie suggests the sisters dress up and go as a group to the annual harvest dance they have long ago forsaken, an idea forcefully – and heartlessly – shot down by Kate, who says that the women will be mocked and the men attending will be too young or too drunk.

”I want to dance,” pleads Aggie. “:I don’t care how young or drunk they are.”

Ed Hoopman plays Michael, appearing onstage as a grown man looking back at that summer, while also portraying the young Michael, who is never actually seen but whose dialogue is performed by Hoopman, The action is seen and remembered through his eyes as he moves seamlessly in and out of the scenes.

Wandering in and about the home is Father Jack (Paddy Sweeney), just returned from 25 years of missionary work in Uganda with a case of malaria, and an experience that has left him one of them more than a member of the Mundy family.

Kate is keen for him to regain his fitness and mental faculties even as she despairs over whether he will ever re-assume his duties as a Catholic priest, and how that his abandonment might affect her job teaching at the parish school.

There’s fine supporting turn by Salem State grad Kandra as Gerry Evans, the Welshman and father of Michael, oozing charm but also at the same times oozing empty promises never to be fulfilled, with good intentions and nothing behind them.

Director Benny Sato Ambush has worked with Crouse on the Gloucester stage in critically-acclaimed productions of “Driving Miss Daisy” and “Lettice and Loveage” and also directed the IRNE Award-winning production of “Master Harold … and the Boys.”

He has cast this piece well and has a sincere affection and strong feel for Friel’s work, and that comes through in the staging, with Janie Howland’s detailed but modest Irish sitting room/kitchen in a country cottage, Arshan Gailus’ sound and original music and Karen Perlow’s lighting.

In “Lughnasa,” Friel is always teasing us with brief, shining moments when it appears Maggie will find lasting happiness with Gerry, that Michael will get the bike that Gerry promised, that Father Jack will get healthy find his bearings again and begin to say Mass, and that the Mundy sisters will forever be together, delighted by those bursts of music coming over that balky Marconi.

And, just as quickly, when reports of Father Jack’s “going native” reach the parish pastor costs Kate her job, when a new factory takes away the pittance the sisters earn, when death visits and the family fractures, all that will be left will be a grown man’s memories of his mother – who went to work in a knitting factor and regretted every moment until she dies – and his scattered aunts, blowing in the wind.