Hub’s ‘The Taming’ entertains and uplifts 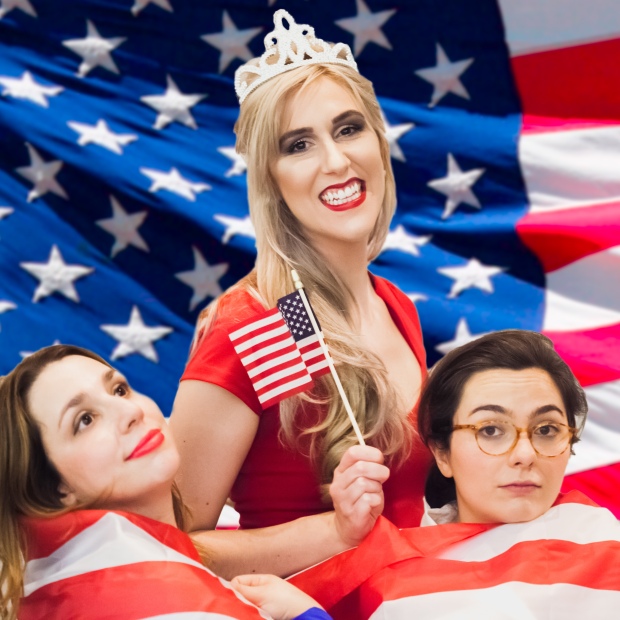 Candidates come out punching; the boxing judges are the cable TV pundits who will declare a winner.

The losers? Those trying to make informed decisions about important issues

The Hub Theatre Company’s production of Lauren Gunderson’s “The Taming” muses about a world where red and blue come together and form a perfectly compromised purple, much like our forefathers did when they compromised in signing the Declaration of Independence or writing the Constitution.

Gunderson is a talented playwright who is currently the most produced playwright in the country. She has had successful productions of several of her works in the area in recent years – “Silent Sky” and “You and I” come to mind immediately — and “the Taming” is political farce on steroids

It is relevant – very relevant – given our current political situation

Gunderson is not above having her characters pretty much lay out what she thinks is going wrong in the country but she does resist taking sides, and because of that she gives up some of the sharper edges on the dialogue. But her sincerity does shine through her characters in the effort to bridge the gap between the warring combatants and eventually lay out suggestions where we could do better and perhaps come together.

Farce is difficult and tricky business; not every one-liner or topical reference will register or connect with the audience

Lauren Elias is Patricia, a political operative for a conservative red state senator of dubious quality who awakes one day to find herself locked in an Atlanta hotel room without pants, a phone or a clue about how she got there.

Making matters worse, her roommate is Bianca (Katie Grindland), a blogger so far to the left she has her own zip code, who is also sans pants and phone and a reason for being there.

They engage in a verbal sword-fight, the ripostes landing with great effect.. They both have good reasons for breaking out of the room, but they aren’t going anywhere because they’re being held hostage by a Southern belle named Katherine (Sarah J. Mann), who plans to get the two women to come together with a plan to fix America, and afterwards ride her success and her current title of Miss Georgia all the way to the Miss America title. Got that, everyone?

At some point, she applies to the warring parties an over-enthusiastic dose of ether, and suddenly the two combatants are transported in the second scene back in time to 1787, powdered wigs and all, to the Constitutional Convention in in Philadelphia, and the two have morphed into two of the seminal figures in the crafting of our Constitution – James Madison, played by Elias, and Charles Pinckney of South Carolina, played by Grindland.

They are hashing out details of what will become our Constitution, and finding out first hand that writing a Constitution is a lot like making sausage.

Still, both sides end up compromising, agreeing that, sadly, slavery will still be legal. The horse trading provides a document that everyone at the time could live with, and not something that was going to be a blueprint for events 231 years into the future.

Farces are meant to be played at Mr. Sulu’s warp speed or what we called in the old days 78 rpm, and director Juliet Bowler ratchets up the pace to keep up with Gunderson’s dialogue, and it helps that all three cast members are quick on their feet, The intimate and well laid-out showroom at Club Cafe make it easy to discern the bon mots amongst the chaos of Gunderson’s characters..

If things get a little bit too far out there in Scene 3, it does give Gunderson a chance, through her characters, to detail some of the improvements she has in mind: less political spending, term limits, popular vote instead of electoral college, a larger House of Representatives, a smaller Senate, redrawn Congressional maps.

“The Taming” is not Gunderson’s best work, but the energy and enthusiasm of the cast and Bowler’s skills lift it and it is never less than entertaining and yes, indeed, at times inspiring and uplifting.

There may be, should be, must be a place where we all come together.

The Hub – still the only “pay what you can” troupe for all performances in Boston – is also offering help to those interested in getting registered to vote or filling out absentee ballots.

In an ever-more-cynical world, “The Taming” works to be a counterbalance, part Rodney King “Can’t we just all get along?” and part a civics lesson disguised as a 90-minute farce.