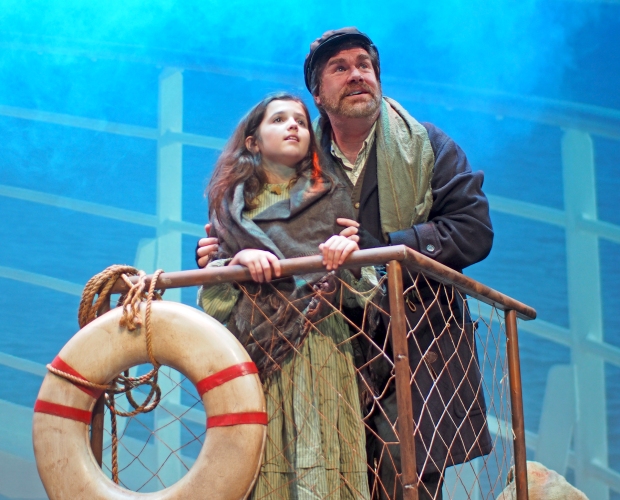 NORWELL – A major milestone is often a chance to take stock of who you are or what you are.

For the Company Theatre, the beginning of their 40th season was also a chance to test itself by again producing “Ragtime,” an epic, sprawling musical about a cataclysmic changes at the dawn of the 20th Century.

It’s one of the best musicals of the last quarter century and the Company Theatre has given it a fully-realized production, with a cast of 35 and a 15-piece orchestra performing Stephen Flaherty and Lynn Ahrens’ Tony-winning score.

The Company Theatre has often punched above its weight as a theater company, winning IRNE Awards for its productions. The formula includes experienced, talented amateurs, young talent from Boston collegiate theater programs as well as the occasional Equity performer.

One of the most compelling intriguing and effective scenes in “Ragtime” is the opening one. Sally Ashton Forrest’s choreography has three groups of people warily circling each other on stage: A privileged white family from New Rochelle, N.Y., for whom every day is “sunny and bright”; a group of African-American residents of Harlem, for whom life is less sunny; and a group of poor immigrants, dressed in shabby rags, clutching their meager possessions.

Their stories and lives will eventually be woven together, and by the end of that first number they have coalesced into one group, the American “melting pot” doing its work.

There are several fine performances in this production that serve as linchpins, anchoring the 35-person cast. Peter S. Adams has played the role of Father on national tour of “Ragtime” and he is comfortable in the shoes of the family patriarch and selfish adventurer.

Father leaves the family – Grandfather (Daniel Hannafin), The Little Boy (Owen Veith), Mother and Younger Brother – to fend for itself as he journeys to the North Pole and seems oblivious to the changes going on around him. He finally returns to find his family and his life changed forever in the number “New Music.”

Adams is also up to the vocal demands of numbers such as “Journey On,” alongside Paula Markowicz as the heroic Mother and Michael Hammond as the intrepid immigrant Tateh, a poor Jew from Eastern Europe who will live to find the American Dream in his adopted country.

As Father is leaving for the North Pole, Tateh, a widower with young daughter (Hannah Dwyer)  in tow, is arriving on a “rag ship” full of other poor immigrants.

Hammond’s Tateh is soulful, his hopes alive despite his despair, his dreams unbroken even as his poverty threatens to crush him.

The score of “Ragtime” is quite simply one of the best musical scores of the last quarter century. It melds distinctive melodies and rhythms, soaring ballads and even a few novelty tunes.

Flaherty and Ahrens employ gospel, cakewalk, marches and always, lingering close to the surface and recurring often, is the rag, a musical genre popular in the early 20th Century and distinguished by its syncopated or “ragged” rhythm.

For the characters of Harlem residents Sarah (Arielle Rogers) and Coalhouse Walker Jr. (Davron S, Monroe), whose despair at the death of Sarah uncontrolled rage, Ahrens and Flaherty wrote not just one but two “11 o’clock” songs – showstopping tunes meant to bring down the house. “Wheels of a Dream” is the Act I closer sung by Sarah and Coalhouse, and “Let Them Hear You,” sung by Monroe as Coalhouse, is the finale.

Rogers and Monroe send the audience out into the lobby on a high note the first tune but I thought Monroe didn’t quite nail the second, perhaps not his fault since the work of Brian Stokes Mitchell and a host of successors in the role still are etched in the back of my mind.

Jeffrey Sewell captures the fire and passion of Younger Brother, repelled by what he sees as the narrow-mindedness and selfishness of his brother-in-law, Father, and looking for something to believe in – finally finding it in Coalhouse’s doomed cause.

Even with the Tony-winning score, “Ragtime” leans heavily on the book by Terrence McNally, who skillfully and artfully adapted E.L. Doctorow’s novel about the early years of the 20th Century.

Lest the more serious themes – immigration and racism, to name just two – at the heart of the musical overwhelm the piece, Doctorow’s novel and McNally’s adaptation have interspersed those themes with some pop culture tidbits to lighten the tone.

So there’s Emma Goldman (Melissa Carubia), the Russian anarchist whose fiery rhetoric and advocacy for workers led to her being deported; Sarah Kelly as a vivacious and coquettish Evelyn Nesbitt, the femme fatale at the center of the so-called “Crime of the Century,” the shooting of famed architect Stanford White by jealous husband Harry Thaw; and James Fernandes has some has fun as Harry Houdini, another immigrant who found his piece of the American Dream.

Then there are industrial tycoons such as Henry Ford (Steve Dooner) as well as other iconic figures such as Booker T. Washington (Todd McNeel Jr.)..

If you’re going to stage a major musical with an award-winning score, it makes zero sense to chintz on the orchestra. I’m happy to report the 15-piece orchestra led by Steve Bass gives full voice to the Ahrens-Flaherty music.

“Ragtime” debuted Broadway on Jan. 18, 1998, and when it came time it for the 1998 Tony Awards it ran headlong into a Walt Disney phenomenon called “The Lion King.”

The two musicals slugged it out. “Ragtime” lost to “The Lion King” for Best Musical despite winning Tonys for its book, and score, but did cop the Drama Desk Award for Best Musical.

“The Lion King” is a fine show, but after seeing both musicals a number of times, history will give “Ragtime” the Tony it should have gotten in 1998. And this production is just another good example of why it should have won.

The Company Theatre production of “Ragtime.” Music and lyrics by Stephen Flaherty and Lynn Ahrens. Book by Terrence McNally, based on the novel by E,L. Doctorow. Directed by Zoe Bradford and Jordie Saucerman. Musical Direction by Steve Bass. Choreography by Sally Ashton Forrest. Costume design by Brianna Plummer. Lighting design by Adam Clark. Set Design by Ryan Barrow. At the Company Theatre through Aug. 19 companytheatre.com.

← Hub’s ‘The Taming’ entertains and uplifts
On the Common, CSC’s deadly game of thrones →