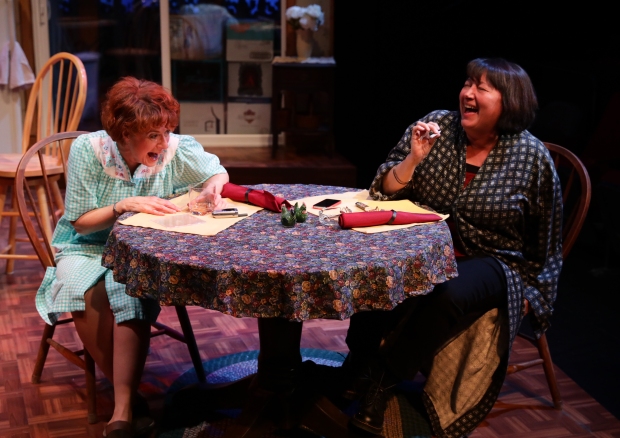 BOSTON — It has been a fertile and well-explored area for playwrights. “You say tomahto. I say tomahto. You say potato, I say pohtato.”

Cole Porter made it a song, and Neil Simon made it a play.

One of the latest theatrical incarnations of opposites coming together is Jen Silverman’s “The Roommate,” now being presented by the Lyric Stage Company of Boston.

Robyn has made her way to the Midwest to just chill out , she tells Sharon, but there may be other reasons she has decided to take up residence in a decidedly under-the-radar location.

Robyn is not Bronx-y in the style of, say, an obnoxious New York Yankee fan. The college -educated woman gently corrects Sharon’s assumption that Robyn has been living in a crime-ridden hellhole.

Sharon, meanwhile, cautions Robyn that she is not actually a native of Iowa, she is from the more urbane, sophisticated state of Illinois, which elevates her above the native Iowans.

Sharon had advertised for a fifty-something female roommate without being too specific, and never figured to get someone coming halfway across the country just for the privilege of living in Iowa City

As they get to know each other, Silverman mines the fertile comic ground of a meat-loving Midwesterner trying to find common ground with a militant vegan.

Sharon’s eyes open wide when she first realizes is a Robyn is a smoker, then again when Robyn lights up a “medicinal herb.” She finally joins Robyn in a “medicinal herb” for the first time, and her eyes begin to open ever wider as she realizes she likes it.

It’s all heady stuff and risky business for a woman who has made it a point to pretty much shut herself down emotionally since divorcing her husband – “actually, I think he divorced me before I divorced him,” as Plum’s Sharon puts it.

Sharon does her best to stay close to a son in New York, hilariously disregarding or oblivious to a myriad of lifestyle choices that point to him being gay. Robyn has a daughter, and their relationship is a mysterious one.

Slowly but steadily, Robyn helps Sharon emerge from her shell but a chance discovery – or was it by chance – shifts the dynamics, injecting a clear whiff of danger into the relationship.

Robyn will make some dramatic revelations and the two will go into business for themselves. The excitement and risky business will actually amp up, moving on from packaging pot brownies for sale to other shady ventures, until Silverman’s plot does begin to lose touch with reality and veer from straight comedy to outright farce, especially when Sharon takes wings with an online date and discovers a new skill.

Still, the angst that inevitably follows the highs and lows of such a combustible relationship is real enough, and convincingly portrayed by Plum.

At the director’s helm is the steady hand of Lyric Artistic Director Spiro Veloudos, who profits from the impeccable comic timing of Plum and Krstansky, and makes sure the production stays on the rails as Silverman’s plot ranges far afield.

The first hour of “The Roommate” is pure theatrical comedy gold and if Silverman’s premise falters a bit late in the game, there’s still plenty here in the performances to make it worth your while.

← At New Rep: An uprising that sparks an awakening
With ‘Fun Home,’ Speakeasy Stage makes a statement →