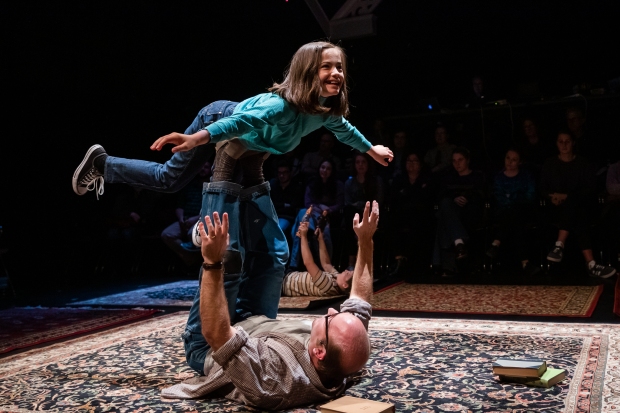 BOSTON – Speakeasy Stage Company has emerged from its fringe beginnings to become one of the finest theatrical troupes in the city – period.

Speakeasy has made a habit of bringing some of the best that Broadway has recently offered here, and this latest effort does the troupe – and, by extension – the rest of the city’s theatrical scene proud.

Speakeasy’s production of the Tony Award-winning “Fun Home” is a searing, soaring, passionate musical memoir of closeted gay father and a lesbian daughter searching for ways to connect and understand each other amid their own personal struggles and the overall dynamics of familial relationships.

The Broadway production made history in many ways:  With the first central character in a Tony Award-winning musical being a lesbian,  employing an all-woman design team to get it done,  and with the first all-female songwriting team to win a Tony for Best Musical Score.

It is also the latest musical to have as its inspiration an unlikely source: a best-selling graphic novel by Allison Bechdel that tells us, from its very beginning, will end in her father’s suicide

The music is by Jeanine Tesori and the book and lyrics by Lisa Kron, who after many rewrites and drafts overcame the difficulty of translating a series of drawings and captions into musical theater scenes.

They also made decision to have the central character of Allison played by there different actresses at three different ages: The young but very talented and poised Marissa Simeqi as the 8-year-old Small Allison; the equally talented recent Boston Conservatory grad Ellie Von Amerongen as 19-year-old Medium Allison; and the just-as-talented Amy Jo Jackson as the 43-year-old Allison, who describes herself as a “lesbian cartoonist.”

Jackson’s Allison has a well-positioned writing desk where she writes her memoir, sketching her memories as they play out on stage and musing about possible captions.

Still, while the triple-threat Allisons are at the center, “Fun Home” wouldn’t work without the complete ensemble holding up its end of the bargain.

Todd Yard gives a nuanced portrayal of the complicated Bruce Bechdel, who does many things very, very well. He is an acclaimed English teacher, a skilled renovator of historic homes, and presents a portrait to the world of someone he’d like to be, but inside is beset by the reality that he is a gay man who has spent decades in the closet and is afraid to come out. 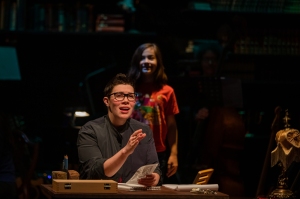 Bruce is immersed in books and is always gifting Allison with them, and Cristina Todesco’s set pays tribute to that with a huge, overwhelming bookcase that spills forward from the stage and hovers over by the entire proceedings.

Wife Helen (Laura Marie Duncan) is trapped in a marriage that long before had become just an empty facade, and she has chosen to turn a blind eye to her husband’s dalliances, which she didn’t quite understand at first but soon came to understand only too well.

Desire Graham has a fine turn as Joan, who is the right woman at the right time at Oberlin College as the 19-year-old Allison comes out to others, her parents and herself.

The Fun Home of the title is the family home, a historic home that has been painstakingly renovated Bruce, but it is also a nod to Bruce’s second job as a funeral director in another area of the home and the imagination of the Bechdel children.

Then there is the other side of Bruce, taking up with a handsome handyman (one of Tyler Sinahk’s several roles), of picking up young men and taking them for rides, the pain that his dual life causes for himself and his wife, and even impacts how he reacts to his daughter’s decision to come out while at Oberlin College.

There is a heart-rending scene when, shortly before his death and after Allison has learned her father’s secret, Bruce wants during a drive to come clean to her about his life but, other than a few oblique statements, never really does.

Tesori and Kron’s Tony-winning score delivers some heartbreakingly beautiful music, and they have spread the wealth around so every character gets a piece of it.

Duncan’s Helen brings tears to your eyes with “Days and Days,” recalling a time many years before when her husband swept her off her feet and then recounting what she gave up to stay married to Bruce and create a home.

Simeqi aces “Ring of Keys,” about a woman whom she finds strangely appealing, foretelling what is to come.

The charming Bechdel kids – Simeqi as young Allison and Cameron Levesque and Luke Gold as her brothers Christian and John – even get their shot, along with some slick choreography by Sarah Crane in two numbers: “Welcome to Our House on Maple Avenue” and “Come to the Fun Home.”

As befitting such a strong production across the board, the production values seem perfectly in tune with the vision of Speakeasy Artistic Director Paul Daigneault.

Set designer Todesco has put the audience in the versatile Roberts Studio Theatre of the Caldwrwood Pavilion on three sides of the stage, and the intimacy of the setting can’t but help draw the audience closer to what is going on.

The relationship between Music Director Matthew Stern and Daigneault has prospered from one award-winning musical to another, and does so again. At times early in a recent show the orchestra threatened to overwhelm the dialogue but the issue seemed to rectify itself quickly.

Again, some of us have at times have praised emerging theater troupes such as Speakeasy with the qualifier: “For a mid-sized company….”

No more. Good is good, and great is great, and after its recent production of “Between Riverside and Crazy” and this “Fun Home,” Speakeasy Stage continues to make a strong statement that it belongs with the city’s elite theatrical companies.

The Speakeasy Stage Company production of “Fun Home.” Music by Jeanine Tesori. Book and lyrics by Lisa Kron, based on the graphic novel by Allison Bechdel. Directed by Paul Daigneault. Choreography by Sarah Crane. Costume design by Charles Schoonmaker. Lighting design by Karen Perlow. Sound design by Andrew Duncan Will. Music direction by Matthew Stern. At the Calderwood Pavilion of the Boston Center for the Arts through Nov. 24. speakeasystage.com. 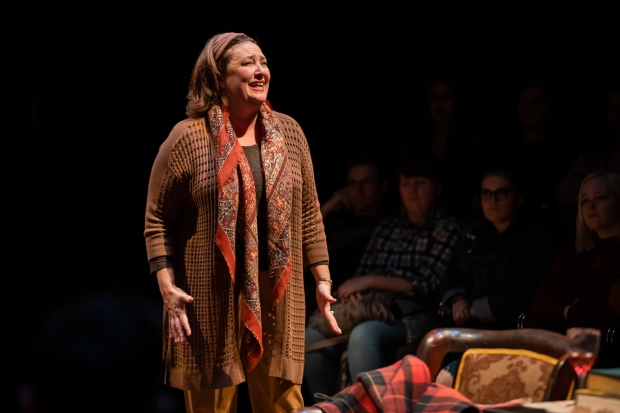